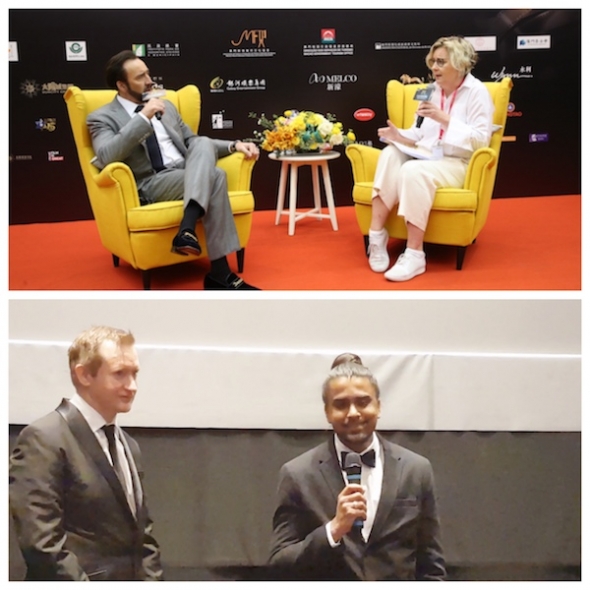 ONE OF THE MOST successful ‘horror’ films to have emerged from India opened the Flying Daggers section of the International Film Festival and Awards Macao here last night.

‘Tumbbad‘ premiered in Venice in the autumn and made its way to London but the filmmakers were not available.

Adesh Prasad, the film’s co-director and co-writer is in Macao and introduced the film alongside Mike Goodridge, the festival’s artistic director. Also at the screening was Nick James, editor of filmmakers and critics magazine, Sight & Sound.

ACV has not seen the film before and though it is billed as a ‘horror’ film, there is much to admire beyond a specific genre film. We hope to talk Prasad soon about the film.

Also here and very much in evidence is Nicolas Cage who walked the red carpet last night for the opening film, ‘Green Book‘ and also spoke at a press conference yesterday (see above picture), but acv had just arrived in Macao.

Today, Cage will present a masterclass and one of his most recent films ‘Mandy‘ screens this evening in the same section as ‘Tumbbad‘ in the Flying Daggers designation.

We hope to see ‘Mandy‘ and a film enjoying its first premiere outside the UK, the British film, ‘Old Boys‘ that premiered in Edinburgh earlier this year.

Seen our story from last night? Please go to the desktop home page screen and view the lead story…

Privacy & Cookies: This site uses cookies. By continuing to use this website, you agree to their use.
To find out more, including how to control cookies, see here: Cookie Policy
← ‘Hustlers’ – Who was exploited? Jennifer Lopez and Constance Wu are terrific in this American crash tale…
Toronto International Film Festival 2019 – Adam Sandler talks to acv about ‘Uncut Gems’ (video) →