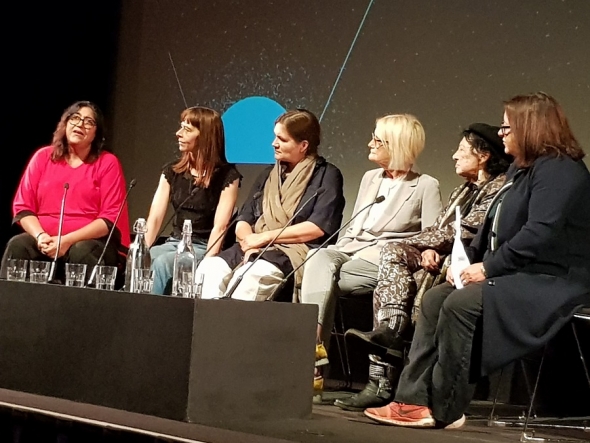 The country’s no.1 film body unveiled some surprising and unsual information yesterday from a long study into British filmmaking…

BRITAIN’S most successful woman practising filmmaker is Gurinder Chadha – and she believes her most commercially successful film, ‘Bend It Like Beckham’ (BILB) would not get made today.

She made the startling assertion about her own film at the launch yesterday of the British Film Institute (BFI) Filmography – which is both a live website and a study of all 10,033 British films made since 1911.

Chadha, along with Sally Potter has made seven films, more than any other women creative alive in filmmaking today – and the fact was revealed by the BFI at the launch of its #BFIFilmography yesterday (September 20).

Looking back at all films, archived with the BFI since 1911, over a five year period, the BFI also discovered Brits made more films on war than sex, and more about Europe than Great Britain and that Sir Michael Caine (with 70 films) is the most prolific British actor still around today and working, and that Dame Judi Dench is the female with the most credits as a continuing female actor (41). As for the most popular subjects of British films, these were both Queen Victoria and James Bond, which tie with 25 titles each.

Speaking after the launch, Heather Stewart, BFI creative director, told www.asianculturevulture.com her team were looking for more partners to fund further research – including the contribution of both Asian and black creatives in film over a longer period. (See below).

Chadha told www.asianculturevulture.com after the launch that she was initially “shocked” and elaborated on why she thought ‘BILB’ would not be made today.

“I was shocked when the BFI told me. It just made me think, I still find it quite hard (to believe).”

“Has there been a film like it (BILB)? People are trying but it wasn’t glass ceiling back then, there were barriers and we had to break them down.”

She said tenacity and not taking no for an answer for had pulled through her whole career – and the only film that she had not had to fight to make was ‘Bride and Prejudice’.

Talking about ‘BILB’, she said: “There was lots of screaming and shouting and I challenged the main financier. I didn’t want to sit on any diversity panels after that but I didn’t give up.”

During a panel discussion at the launch she said that she thought ‘BILB’ was too “maverick and isolated a film” for backers now.

“People don’t realise how hard it is, you have to pick up the energy, put on the armour and go to battle,” she told acv later.

During the discussion, she said she had been inspired to work in film because she did not see people like herself on the screen.

She said she was “saddened” in one sense that she was the most prolific filmmaker of her generation.

“It’s a tragedy that our stories are not being reflected. It’s such a loss to us as a nation, it reflects who we are and these are historical documents.”

She urged young filmmakers to keep going and show “gumption” and make films that had a unique voice and she called on producers to show flexibility and imagination and be open to “emerging voices”.

Talking to acv, she joked: “Now where are the other Asian women filmmakers when I retire…”

She recognised the struggle and difficulties and said it is easier if you have a vocation or job you can always fall back on.

“When I started out, I lived in a rent-controlled apartment; I didn’t have to worry about a mortgage, I didn’t have kids, I could scrape by and when I wasn’t working (in film) and had no money and not a lot of people know this – I used to direct episodes of Gay Times TV.”

During a panel discussion with Dickie, Sophie Fiennes, producer and director, (who has just made a Grace Jones documentary), Renée Glynn, script supervisor and Nina Kellgren, director of photography, with Stewart moderating, Chadha revealed how a senior male filmmaker had reassured her on the set of her first film, ‘Bhaji on the Beach’, while others had been critical of her – stressing that not only should women get support from their fellow woman filmmakers but men too.

Speaking to acv after the launch, Stewart said the data crunchers at the BFI led by Stephen McConnachie, were keen to explore the black and Asian contribution to filmmaking in more depth.

Last year, the BFI launched Black Star, with the help of actor David Oyelowo. It looked at the contribution of black actors to British filmmaking over just a 10 year period and celebrated that.

“We want to widen that to black and Asian. We want to do research (for a longer time period) and it is the next phase. We have only two people here, we need partners. Stephen is champing at the bit.”

One of the purposes of the filmography study is to see where the gaps are in terms of those helping to make films – historically the number of women appearing in films has not changed over 100 years and less than one per cent films had a crew that could be identified as having a majority of women on them. The BFI has introduced a diversity charter and where it helps to finance films is keen to see that the charter is adopted in terms of diversity and representation across race and gender.

You can research and share your data findings at the site https://filmography.bfi.org.uk/