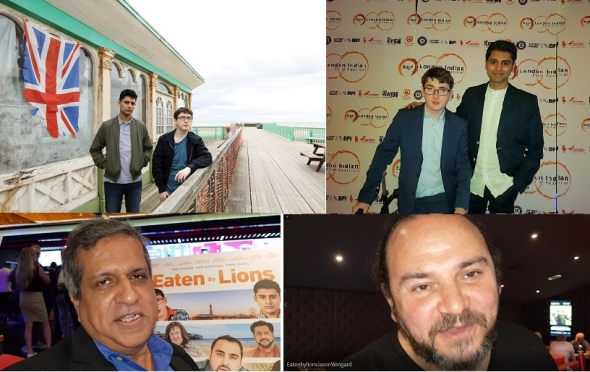 QUIRKY, funny and really very, very British, ‘Eaten by Lions’ might not be everyone’s cup of chai as a film, but it has a big heart and two winning central performances.

Antonio Aakeel as ‘Omar’ and Jack Carroll as ‘Pete’ as two half-brothers caught on a mission to find the former’s on-screen dad provide the essential plot hook for this movie, which is screening both at the Birmingham and Manchester Indian Film Festival.

It screened last night (June 27) at the Odeon, Leicester Square as part of the parent London Indian Film Festival.

The half-brothers’ journey takes them from Bradford to Blackpool and along the way they encounter well-known comedian Johnny Vegas as B&B proprietor ‘Ray’ and Asim Choudhry (aka Chabuddy G from ‘People Just Do Nothing’ as ‘Irfan’).

Writer and director Jason Wingard penned the script with ‘Coronation Street’ soap writer David Issac and it was born from a desire to show Britain as it is – multi-cultural, multi-religious, and ethnically diverse and well, a bit dodgy at the edges…

But if, and when, you see the soothsayer scene (on Blackpool pier) and the B&B Ray runs, you will understand.

‘Eaten by Lions’ started out as a short film, winning Virgin Media shorts prize (£30,000) and was assisted by the British Film Institute after an initial pitch to i-features.

Wingard further explained the background of ‘Eaten by Lions’ to www.asianculturevulture.com yesterday: “Years ago, we’d written these taxi driver shorts, and one was white and the other Asian.

“We had lots of fun with that – and so it was an extension and you want to represent the people around you and a multi-cultural inner city.”

Carroll has cerebral palsy and uses a walking frame to get around – just as he does in the movie. He first shot to prominence in ‘Britain’s Got Talent’ a few years back and has been adding acting to his stand-up routine and writing.

“When we cast Jack, the issue of disability came up,” revealed Wingard.

It’s very understated in the film and Carroll’s character isn’t defined by it all – which is great.

Wingard said securing Chaudhry and Vegas was a lot easier than it might appear on paper.

“With Asim, we really wanted him to do it. Johnny, I’ve known for years and I just said which part do you want? He said Ray, you’ve got it.”

‘Eaten by Lions’ is looking for a distributor and it shouldn’t be a massive struggle.

“We will do a short festival run, and then we want to get it out there to people. It’s selling out wherever it goes, there’s laughter in the room and the reviews are good. Come on guys, let’s get in the cinema,” said Wingard.

Review
COMEDY can be a great vehicle for changing people’s minds and seeing the world anew or afresh.
Co-writer and director Jason Wingard’s ‘Eaten by Lions’ has a certain jaunty charm and the central relationship between two-half brothers is endearing and keeps the film together – when it might have gone off the rails.
The comedy when it works is excellent, but sometimes it might be trying a little too hard.
It has more of comedy drama feel to it and perhaps Wingard didn’t exploit Johnny Vegas (B&B owner Ray) and fortune-teller (Tom Binns) – quite enough, though some might think what is in the film is still over-egged, even as it is.
There are some touching scenes and memorably, Natalie Davis as ‘Perveen’ threatens to usurp both Aakeel and Carroll as the mute temptress who takes the rather broody and sensitive Pete on a journey he would rather forget.
It might be overplaying the laughs in places, (Chaudhry is relatively subdued actually) – but you can’t help feel warmed by its heart and its desire to show Britain and the north in all its facets.
ACV rating: *** (out of five)

Privacy & Cookies: This site uses cookies. By continuing to use this website, you agree to their use.
To find out more, including how to control cookies, see here: Cookie Policy
← Jashn-e-Rekhta – Urdu festival celebrating poetry, music, and cinema comes to London for the first time and in a digital edition
Bollywood asianculturevulture vibes – Glasgow to Mumbai and back as more blockbusters come into view… →