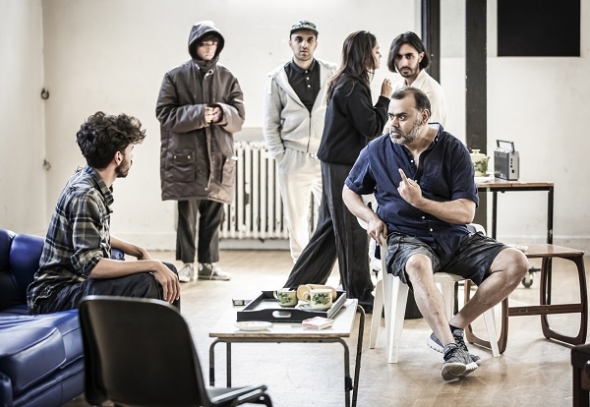 FEW plays have weathered time quite as well ‘East is East’ and it’s a very fitting return to where it first premiered 21 years ago (in 1996).

It’s a great moment to celebrate this landmark play and anniversary at the Birmingham Repertory Theatre with a new production.

It opens tonight (September 3) and runs until September 25 there, before transferring to the National Theatre in London from October 7. Tony Jayawardena plays George Khan, the infamous father at the centre of the drama; Sophie Stanton is his long-suffering wife, while their children are played by a young Asian cast. (See below for more).

There have been several different productions down the years (with pioneering theatre director Jamie Lloyd last bringing it to London at Trafalgar Theatre in 2014) and the film of the same title in 1999 brought it to a wider and more global audience.

The play was first developed from a rough play by jobbing actor Ayub Khan Din and developed by Tamasha – the company that actor-writer Sudha Bhuchar and director Kristine Landon-Smith created to bring South Asian stories centre stage in Britain. The play became one of the first of its type to ever transfer to the West End.

This is, as the director of this production and Birmingham Rep associate director, Iqbal Khan told www.asianculturevulture.com, “a modern classic”.

“A lot of people talk about this being a great British Asian work, but I feel it’s more than that – it’s a modern classic – and it should be appreciated in that way,” Khan told acv.

At a very simple level, this is a family story about a father feeling almost violently alienated from his children – and increasingly at odds with his white British-born wife over the raising of their children.

It is based on Din’s early life and teenage years growing up in Salford, Manchester in a mixed race family – with a father who left Kashmir for Britain and then married a white British woman and ‘East is East’ is essentially a story of their children.

Some will say it is the classic culture clash – and in one sense it is, but it is also deeper and more complex, as well as being funny, profound and moving.

Khan explained: “It communicates to all sorts of groups in the way that it talks about family dynamics.

“It’s quite surprising where Ayub goes with the violence and the domestic violence he depicts, it’s really shocking. We are going to be completely unafraid to explore those extremes.

“For a 21st century audience, these issues have never been more current or hotter than they are at the moment, issues of national identity – how do you define yourself? As British or Pakistani? And on top of that there are the racial issues and they are a mixed race family.

“You have all these sorts of subjects and I don’t remember a play that deals with all this as well as this.”

At one level, as a story, the play originally helped to open up certain subjects rarely voiced in national conversations.

“Perhaps the most important element is that it is was one of the first mainstream and visible stories about a community I identified with,” Khan said explaining his personal, pre-professional connection to ‘East is East’. He saw the film first and directed it at the Birmingham Rep 12 years ago.

“You see yourself on film and stage and some of the complexity of (your) story is represented and that was not very apparent when I was growing up,” he revealed.

Iqbal Khan was raised in Birmingham in a Muslim household and knew of figures just like the authoritarian George ‘Genghis’ (as he referred to in the play by his children) Khan outlined in ‘East is East’.

“My father died when I was very young, but I certainly saw figures like George Khan in the wider family,” he told acv.

Khan feels that initially many of those immigrants like George Khan from similar backgrounds just got on with life – they put up with racism, got jobs, had families and hoped their children would do better.

Writer Khan Din himself said that his father seemed to change as more family from Pakistan came to the UK. (See here for this story – http://asianculturevulture.com/portfolios/east-east-journey-through-time/).

Iqbal Khan told acv: “Currents have changed enormously – Islam as practised by Pakistanis that came over here (in the 1950s and 1960s) were much more liberal and relaxed.”

This shift is complex and as Khan intimates was both a reflection of a greater sense of being settled in the UK – and in some ways, also a response to the fear of being completely assimilated and losing a rich and powerful source of identity and culture.

Khan said: “It’s gone through various cycles and second and third generations have either completely embraced it or gone the other way and tried to protect a sense of identity that is notional.”

Khan is also acutely aware too of the intra-community aspects of ‘East is East’ – it is now being performed in the year that Bangladesh marks 50 years of its creation and independence from Pakistan.

In 1947, the Muslim majority areas of British India were literally drawn on a map and West Pakistan and East Pakistan (what was East Bengal) were created – those living in East Pakistan fought against West Pakistan in a war to establish a new country, Bangladesh.

“One of the big events happening off stage is Pakistan losing East Pakistan and so George’s identity is being stripped away – that’s a very strong current I want to explore,” said Khan.

There’s a scene where an Indian-origin doctor treats the family and George isn’t thrilled – especially in relation to what’s been happening in East Pakistan at the time – Pakistan blamed India for the war and the rupture.

George’s emasculation is another powerful thread running through the play – he feels like he can’t control anything or anyone.

His children are developing in ways that he doesn’t feel comfortable with – the eldest son is absent and has run away after forgoing an arranged marriage and the next two sons, Abdul (Assad Zaman) and Tariq (Gurjeet Singh) are not happy about a similar arrangement in the offing, while Meenah’s (Amy-Leigh Hickman) skirt is too short and Sajit (Noah Manzoor) lives in his parka coat.

Khan also feels that ‘East is East’ helped to open up doors professionally for people like himself, trying to forge a career in theatre, where there were very few Asians at all.

Tamasha and other similar theatre companies also brought Asians into theatres and made the community more visible.

Growing up, Khan was exposed to theatre and opera, but his path into the arts was far from pre-destined.

A serious illness while at Cambridge University, where he was reading Maths, forced him to re-think his career options and he transferred to Imperial College and it was there his life was to change.

“At Imperial I joined the drama society and I was involved in a production – and it was that experience of the rehearsal room and the generosity of the conversations there and how open people were to discovering stuff that I found thrilling.

“I’ve always enjoyed language and music and art and being in a room and just being able to ask questions and discover stuff together was the most exciting adventure to go on.”

There’s a sense of returning home for Khan – the local boy made good who directed the West End all-Asian ‘Much Ado About Nothing’ and Royal Shakespeare Company’s ‘Tartuffe’, ‘Antony and Cleopatra’ and ‘Othello’.

Khan couldn’t tell acv what comes after ‘East is East’ for him.

“There are a couple of projects with The Rep – some very exciting things ahead but I can’t say.”

Privacy & Cookies: This site uses cookies. By continuing to use this website, you agree to their use.
To find out more, including how to control cookies, see here: Cookie Policy
← Bollywood asianculturevulture vibes – It’s all going OTT and how Akshay Kumar shoot has got everyone talking…
Black, Asian and ethnically diverse theatre artistic directors and cultural leaders write open letter and call for diversity to be part of dialogue as government considers revival of sector… →