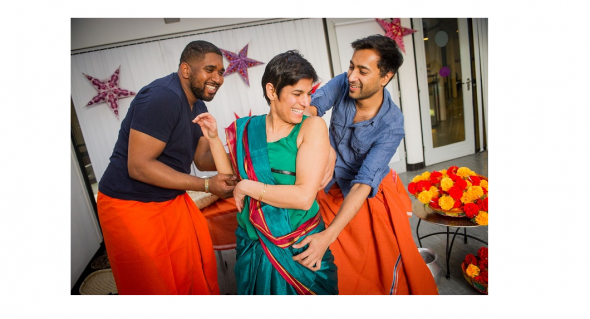 New play looks at what society might look like if the fairer sex ruled the roost, as “The  Husbands” begins a national tour…

IMAGINE a world where a woman could be married to more than one man and there not be a murmur of dissent about this.

In fact, it is the norm and happily accepted by all.

Playwright Sharmila Chauhan has done precisely this in creating “The Husbands”, which opened in Plymouth on Wednesday (February 12) for a three-day run there before going to  Birmingham, Leicester, Shrewsbury, Wolverhampton, Tewkesbury, Ludlow and finally London, for a 12-day spot at the prestigious Soho Theatre from March 11.

Ostensibly about the practice of polyandry, where one woman is married to more than a single man, the play goes to the very heart of issues between men and women that bedevil all our societies in some form or another.

“It raises lots of questions and asks what do we really value women for,” Chauhan, a 38- year-old married mother of one, told www.asianculturevulture.com. “Yes, it’s about the lack  of girls (in India especially, where foeticide of baby girls shockingly continues virtually  unchecked) –  but put women in a power system where they are valued and have political, sexual and financial power and see what happens…”

Set in rural India in 50 years’ time in a fictional place called ‘Shaktipur’, the play projects a community that has gone back to the land and is led by a powerful woman called Aya, who is celebrating her third marriage.

“It’s a story that has global relevance, for women in the west too,” said British-born Chauhan (pictured left), whose family are Gujarati and migrated from East Africa, “where we feel that we  are emancipated and have so many opportunities – which we do – but when a woman has  ‘everything’, what does that actually mean? What is it we (as women) are looking for? And  have we achieved equality?”

‘Aya’s’ happiness and joy at acquiring another husband is disrupted by the figure of ‘Jerome’, a white-skinned Englishman.

“So, this is also about exploring the relationship between India and the West,” Chauhan revealed.

Her world is partly inspired by a real community in India.

In the south western part, in the state of Kerala, polyandry was not uncommon in the 19th century.

Women from a particular caste, known as  ‘Nayars’, were well-known for this and were not  the sole possession of a single man or husband. Some other caste groups in Kerala also had this practice.

The women had relationships with more than one man and this led to matrilineal lineage, with property going through the female line and women enjoying a certain amount of freedom and respect, certainly in relation to other parts of India.

Today, the practice of polyandry is outlawed and has more or less died out in Kerala, though is apparent in some mountain communities, and in isolated areas of Punjab, in response to the crisis around the male to female ratio.

In Kerala, the women outnumber the men as you would expect in natural circumstances.

Chauhan, who visited Kerala 10 years ago and more recently this Christmas, spoke to women from the Nayar community.

“When I met them, they just had this sense of controlled confidence and from a gut feeling I could tell they felt equal.

“They could keep their names, inherit property and they were not beholden to a man,” she enthused.

Some vestiges of the practice in parts of Kerala, such as matrilineal inheritance, still exist.

Polyandry is also well-documented in ancient texts and in “The Mahabharata”, one of the  central characters, Draupadi is married to five brothers.

In other ancient Hindu texts, women also have a very different position and place than they commonly do today.

There were Hindu goddesses with temples devoted to solely to their worship.

Chauhan wrote about these “Yoginis” in her first professionally staged production, “Born Again”, which was performed at the Southwark Playhouse in London in 2012, as part of the centenary celebrations to India’s incomparable polymath Rabindranth Tagore becoming the first Asian to be awarded the Nobel Prize for Literature (2013).

“Most of the yogini temples have been destroyed but that’s why I put them in ‘Born Again‘,”  explained Chauhan.

The ideas of Shakti and female energy and power are also embedded in some ancient Hindu texts, but have been lost in the midst of time as a more patriarchal culture has asserted itself  in India.

Chauhan believes some of the antidotes to tackling patriarchy in India exist in an age old  wisdom that valued feminine power and strength.

“It’s very interesting in India, now you have the subjugation and abuse of women, but at the same time we have this this amazing history of matriarchy and polyandry and I think in our history we have the seeds of a solution – that’s what really inspires me.

“It’s all there – we have just forgotten about it.”

Chauhan believed it was perfectly possible to be a Hindu feminist, when the question was posed to her.

“Hinduism is feminist – there are strong ideas there,” she responded.

She grew up in a devout Hindu household and was taken under her grandmother’s wing.

She introduced the young Sharmila to Hinduism through satsangs – religious discourses given by learned gurus and Sharmila read a lot.

“I appreciate her for giving me that, it’s a real gift and even though I have a different relationship with religion now, it’s given me a strong foundation.

“I don’t believe everything or do everything (as a Hindu) but I feel like I have an affinity to feel things,” Chauhan explained.

She suggested that colonialism might have had something to do with the ancient ideas of female equality in Hinduism withering.

And she also seeks to challenge the idea that a woman who is not a mother is a lesser being.

“Aya is not a mother. Aya doesn’t want to have children – that’s part of the thing that the play  explores. Becoming a mother – what does it change or mean for a woman?” Chauhan posed.

A medical writer by day, she has been supported in her playwriting by Tamasha, Kali, and the Royal Court through their writing programmes.

The current production is a joint effort between Kali and Pentabus, a theatre company that specialises in more rural tales.

Chauhan revealed: “It was interesting when they were casting, some men felt a bit uneasy about the idea of a man that shares his wife.

“It’s asking a lot in this society, but if you were asking the women actors to be in polygamous relationships, I don’t think you would have the same problem.”

She praised the role Asian theatre companies are playing in developing new talent and  bringing new voices to the stage.

“We’re so lucky to have Asian theatre companies; we don’t have an Asian literary agency or an Asian publishing house, so our stories are not told.”

She felt some aspiring Asian writers in Britain also tried to write for a particular market and  make their work more saleable, sometimes compromising on their most instinctive voice or passions.

“They can’t stop doing it and they are very aware of the white gaze and looking at a mainstream market,” she said.