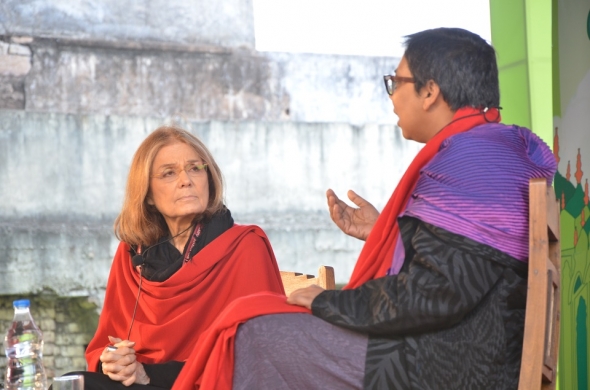 The sexual equality campaigner, who has been at the forefront of feminism for more than 50 years, issued the clarion call on the opening day of the Jaipur Literature Festival.

Speaking at the ‘Women Uninterrupted’ strand, which forms one of several themed discussions this year, she called on men to be able to do more child-rearing, while encouraging more women to enter the public space and be active there.

Steinem (pictured left) was the pick of the speakers www.asianculturevulture.com heard on the first day of the festival, which included contributions from US National Book Award winner Jonathan Franzen and writers Geoff Dyer, Carsten Jensen, Philip Hensher and Reza Aslan, all in different sessions.

Invited by Indian journalist and women’s rights activist Ruchira Gupta, Steinem said it wrong to see the problems of women in the West as completely removed to those in Asia.

“Everyone here makes a difference,” she said.

“If there is an American Imperial feminism, tell me and I will be against it,” she stated.

Gupta has compiled a book of Steinem’s essays and writings, called “The Essential Gloria Steinem”, which she believes offers women in India, inspiration and courage to continue their own battle.

Steinem said there was nothing wrong with men calling themselves ‘feminists’ and most people believed in feminism, which for her stood for equality on all levels.

“It’s not about biology,” she explained. “It’s about consciousness.”

She said there were often two types of people who had an issue with the word, feminism. The first were those who didn’t really understand what it meant but when it was explained to them (as equality), believed in it.

“The other group know exactly what it means and they are against it,” she explained.

At a base level, it was still a battle about the control of women’s bodies, Steinem said.

She said the battle took different forms in different countries and that sex trafficking remained a huge issue, but the solutions were not always obvious or simple.

She told the audience about visiting a group of poor rural women in Zambia after it had been reported that two women from their community had gone missing, following a trip to the West, where it was likely they had been pushed into prostitution.

“There didn’t seem to be much in common (between us) but then one of the women opened up about being a widow and free from her violent husband and she started to cry.”

It was the catalyst for a franker discussion, Steinem recounted.

“They said they had a problem with elephants eating the maize crop they grew. The crop got destroyed and they would be poor and could not feed their children and that was why the women had left.”

It turned out that what they required was an electric fence. Steinem raised some money to build one and it kept the elephants out.

“They had a bumper crop and they could feed their children, none of them had to leave.”

One of the essays in the new book to be published in India deals with Steinem’s experiences as a bunny girl in the 1970s. These were clubs in the US run by Playboy, where girls would dress up as “bunnies”.

In recent times, there have been discussions in India about Playboy clubs being permitted to operate in Goa.

Steinem said she found it hard to believe that something women had fought against in the US could be returning to India.

She went on to make a distinction between pornography and erotica, believing that the former represented and reflected patriarchy and men’s desires to control women’s bodies, while the latter often articulated in writing, was more equal and healthy.

She also spoke about the issue of prostitution, saying it was wrong to criminalise the women involved and that it was almost always controlled by men as pimps and owners of brothels.

Gupta said her support for reforms in Sweden on the issue had helped her to understand the battle in India.

Both made the points to encourage women (and men) to join together in the battle for equality.

In a very different session in tone and temperament, Franzen said he had moved away from the whole dictum of “show, don’t tell” as a writer, and was far keener on the idea of “story-telling”.

This he said had been part of his motivation for penning his prize-winning novel, “The Corrections”.

Franzen will return to the stage tomorrow when he discusses ‘The Global Novel’ with Jhumpa Lahiri, among others.

In a session entitled ‘Litcrit’, discussing the role of critics and reviewers, Danish author Carsten Jensen claimed: “It’s a dirty job but someone’s got to do it.”

Jensen explained that he was a professional reviewer before he became a novelist and said it performed a function, but not often a useful one.

British novelist and critic Geoff Dyer took issue with him, saying reviewers wanted to do a decent job and understood the limitations of the form.

British novelist and critic Philip Hensher singled out US-based critic, James Wood, saying he believed every novel was about religion.

“It isn’t,” said Hensher, who also said he didn’t like writing and would stop if someone gave him £20 million. It was tongue-in-cheek and Hensher enjoyed pricking any pretensions that surfaced.

He did concede that his novels began with small ideas that nagged him and then grew into something, he “could not help but write”.

In one of the closing sessions, Reza Aslan, whose book, “Zealot: The Life and Times of Jesus of Nazareth” caused such a furore in the US, shared his experiences of growing up there.

“In the 1980s I was Mexican and into breakdancing,” Aslan quipped as he told an audience in “Leaving Iran”, how difficult it was being of Iranian origin in the US when relations had plumbed to such depths between the two countries at such a time.