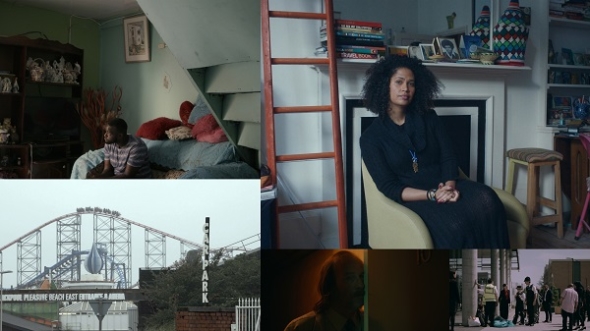 MADE by a mix of well-established and emerging directors and several from ethnic minority backgrounds, ‘The Uncertain Kingdom’ is a series of 20 short films that present a portrait of Britain today.

It was shot and assembled some time before lockdown and was set to get a cinema release in April, but has just transferred online and can be viewed on a number of online platforms, including Curzon Home Cinema.

The themes in ‘The Uncertain Kingdom’ range from poverty, homelessness and racism.

Among the directors who have films in the ‘The Uncertain Kingdom’ is Ray Panthaki, who has appeared in big studio films, ‘Colette’ (2018) and ‘Official Secrets’ (2019) and was in the popular soap ‘Eastenders’.

ACV has not seen all 20 films but a cross-section…

‘What’s In A Name’ (director: Runyararo Mapfumo) is an intelligent and beautifully constructed film about representation such as how Turkish Cypriot Mehmet becomes ‘Mark’; and featuring a range of subjects discussing what their names mean to them.

‘The Conversation’ (Lanre Malaolu) A choreographer and director, he uses dance to discuss how black people can discuss the racism with their white partners and/or friends. It’s a dynamic and engaging piece.

‘Motherland’ (Ellen Evans) explores what it means to ‘go back home’ through the two men forcibly returned to Jamaica, alongside a member of a Windrush generation not allowed to come back to the UK.

‘Ernie’ (Ray Panthaki) In this, Paul Kaye is the timid character of the title who cares for his domineering dad, ‘Arthur’ (Steven Berkoff) and comes under some toxic influences with unexpected consequences.

‘Left Coast’ (Carol Salter) is about poverty overlaid to audio news about how well the economy is performing and was filmed at a Blackpool food bank. It feels very contemporary (even though it has nothing to do with Covid or the lockdown) with some beautiful shots of the coastline through rain-smattered windows, but the story somehow feels incomplete.

‘Pavement’ (Jason Wingard) This is by the director, who also made the comedy, ‘Eaten by Lions’ and is about a homelessness man sleeping on the pavement outside a posh office, while a do-gooding woman tries to help him much to the general apathy and malaise of others. It’s a black humour parable and may not be to everyone’s taste.

‘We are Not the Problem’ (Dominika Ozynska) It is a sketch animation film about a Polish worker that takes a wry look around the immigration issue. Very subtle.

‘Verisimilitude’ (David Proud) From a company, 104 Films and a director who is wheelchair bound – it’s a film that focuses on disability, and gives us an ironic story with featuring Ruth Madeley, a real life wheelchair actress. She has spina bifida and stars as ‘Bella’, who is auditioning for the role of Shakespeare’s ‘Richard II’ only to be told he was a man! Later, she discovers that an able-bodied actor friend is playing a disabled athlete for a film and she is given the task to train him to use a wheelchair with authenticity. Directed by Proud and who is both a director and actor, this is a film that forces the audience to confront issues around representation and prejudice of people with disabilities.

www.asianculturevulture.com enjoyed dipping into the pot pourri selection which has other stories, such as ‘The Life Tree’ by Paul Frankl, about a Bolivian maid whose son is ill due to plastic pollution, while ‘Strong is Better than Angry’ by Hope Dickson Leach (Bafta Breakthough Brit 2017) is about a cross section of women who channel their anger through boxing.

These films are all a snapshot of the United Kingdom, which was going through some uncertain times even before the Covid Pandemic and the films are a reflection of a post Brexit Britain.

Listing
‘The Uncertain Kingdom’ released by Verve Pictures, and available on BFI i-player, and other channels such as i-tunes, Google Play, Curzon Home Cinema and Amazon Video
More info/details http://theuncertainkingdom.co.uk