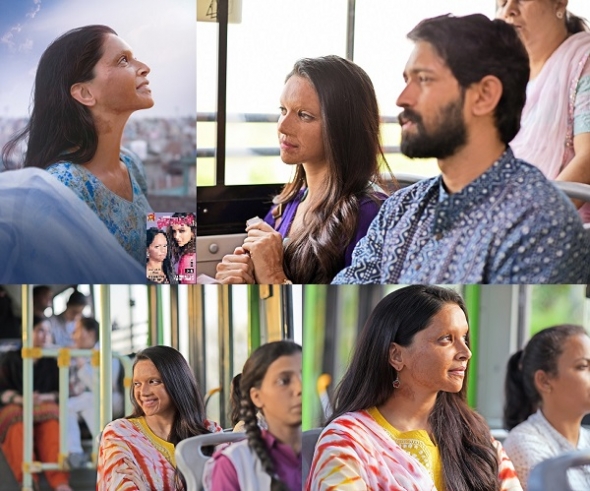 WHEN THE TEASERS for ‘Chhapaak’ (Splash) were released last year, showing Bollywood actress Deepika Padukone in an almost unrecognisable guise with a disfigured face, it was clear that this was going to be one of the most anticipated films of the actress’s career.

Padukone who celebrated her 34th birthday last week plays both the protagonist ‘Malti’, an acid attack survivor and makes her debut as a film producer. The story is based on real-life events, that of Indian teenager Laxmi Agarwal who was the victim of an acid attack and is now an activist helping survivors fight for justice.

The trailer for ‘Chhapaak’ contains harrowing footage. First there’s the scream of horror when Malti first looks in the mirror after her facial reconstruction surgery and no longer recognises herself and then the alarming gasp of a scared child on the street when he looks up and sees her. It certainly gives the impression that ‘Chhapaak’ will be an emotional watch.

UK-based Bollywood blogger Anuj Radia believes it will be a landmark film in Padukone’s career.

He told www.asianculturevulture.com: “It’s incredible to see Deepika undertake such a realistic character that has undergone such a traumatic ordeal yet emerged triumphant on the other side.

“The fact that she herself overcame depression and launched a foundation on raising awareness and helping others makes her more apt to play the character. This will undoubtedly be her best work yet as an actor.”

Deepika herself has shared countless posts about the film on her Instagram, more than any other film she’s starred in which perhaps is her way of expressing its importance to her as an actress and producer.

She said on her page: “Rarely do you come across a story where you do not need an entire narration to decide if you want to be part of a film or not.
“What is even more rare is to not be able to articulate and put into words what you feel for the film and its journey.”

‘Chhapaak’ is part of a new genre of social realism films in popular Indian cinema but the topic it deals with is by no means one that’s exclusive to that country.

Charity ActionAid says that victims are mainly women and girls and there’s also a geographic slant to these crimes: “The majority of attacks happen in South Asian countries such as India, Pakistan and Bangladesh where acid remains inexpensive and easily available.”

Typically, sulphuric acid or other corrosive substances are thrown on a victim’s face burning and scarring their skin, causing permanent damage such as loss of sight, hearing and sometimes even fatality. In India it costs around 50p a litre and in the UK, £5 a litre to buy these harmful acids.

Victims are usually escaping forced marriages, have refused physical contact and are attacked by men who feel scorned or rejected.

Acid attacks are a way to exert power over them, as by disfiguring a woman’s face it will prevent anyone else from marrying the woman, which is what happened to Agarwal, whose story inspired ‘Chhapaak’.

But these aren’t the only reasons, there are cases where there is no motive and victims are simply in the wrong place at the wrong time.

It’s not just in South Asia where acid attacks are rife.

Speaking to acv, he said: “Acid attacks are a very old crime dating as far back as the late 1700s in the UK and Europe. It was quite widespread particularly in regions where there were industrial sites manufacturing acid, particularly sulphuric acid – this played a very important role in driving the industrial revolution.

“The link between industry and acid violence is an important factor as acid violence spread across continents over the last century.”

In fact, in 2017 the UK had one of the highest recorded rates of acid attacks globally.

The Offensive Weapons Bill passed in May 2019 with a clause to tackle acid violence in the UK should have some impact in reducing the numbers, but the figures are yet to be released.

Not all police forces provide an ethnic breakdown of victims but the London Metropolitan Police do.

Shah confirmed: “Based on their figures for 2017 people with an Asian background represented around 20 per cent of victims in London and around seven per cent of the perpetrators.”

On a global scale acid attacks are responsible for destroying the lives of families worldwide.

Nurun Nahar works at ActionAid Bangladesh and was a victim of an acid attack when she was 15.

She explains the complexities of life after an attack: “Community members don’t treat acid survivors well. Families often blame the survivor and think it shames the family – it’s also financially hard because of the medical costs.”

In India, raising awareness about acid attacks through movies like ‘Chhapaak’ is an effective way of reaching a mass audience.

Radia is hoping the topic is dealt with sensitively by director Meghna Gulzar.

He added: “I’ve noticed that when movies revolve around social issues some filmmakers shy away from confronting the matter at hand and as a result, it gets diluted in unnecessary tropes like love songs and drama.

“Recovering from an acid attack is a long and painful process. I sincerely hope that the film will cover that journey.”

Agarwal isn’t the only face who is spearheading the acid attack prevention campaign in India.

Anmol Rodiguez who experienced an acid attack when she was a child is a social media influencer with over 120K followers.

The 24-year-old Indian runs NGO Acid Survivors Saahas Foundation and with her mint green hair has also become a style icon – in fact her Instagram looks like the typical account of a regular fashion blogger – the only difference is that she doesn’t hide her face under layers of make-up, choosing to show her natural scars.

It’s perhaps role models like this that will have the most positive impact on raising awareness about acid attacks, possibly even more than cinema in the longer-term and around the world.

Yet when it comes to preventing attacks from happening in the UK the task ahead is a complex one as Shah explained: “As well as tighter regulation on sales of corrosive fluids, work has to be done to tackle the underlying causes.

“This is generally a combination of complex factors (such as social, cultural, economic) and requires a longer-term solutions including investment of resources into communities affected by acid violence.”

‘Chhapaak’ is out on worldwide release from today (January 10)

For more information about ActionAid http://www.actionaid.org.uk/