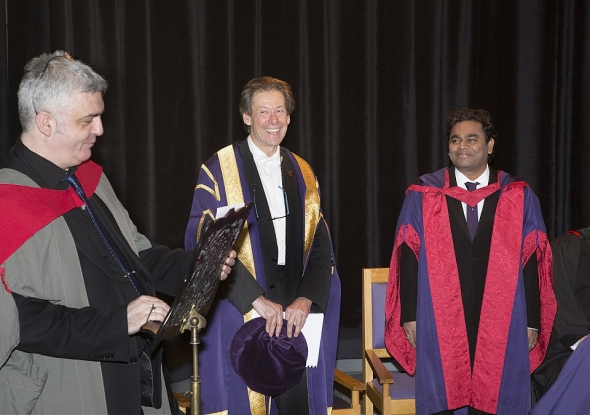 Music composer and double Oscar and Grammy-award winner AR Rahman made a rare trip to Britain from India recently and journalist Ashanti Omkar was there to witness the magic as it happened. In this diary piece she recounts a very memorable three days…

AR RAHMAN, three teachers, one alumni, and 20 current students of his KM Music Conservatory (KMMC) from Chennai, descended upon Glasgow, Scotland to reforge relations between India and Scotland for the Celtic Connections festival, in Glasgow’s Commonwealth Games year 2014. This was an 18-day festival of 300 concerts, with 2,000 musicians from all over the world, playing in different venues across the city.

One of the world’s best arts institutions, The Royal Conservatoire of Scotland (RCS) also honoured AR Rahman with an honorary doctorate in Glasgow (pictured above). This marked his 5th honorary doctorate, including one from Middlesex University in London, as well as Trinity College, Royal Greenwich, London, awarded in December 2009. The RCS has around 900 students from 55 countries, learning from the finest teachers in an unrivalled campus.

It was a birthday gift for me to make this trip to Scotland, and my very first time setting foot in bonnie Glasgow, a vibrant city, full of arts, culture and music lovers. I joined the team during the sound-check at the magnificent Glasgow Royal Concert Hall, where the BBC Scottish Symphony Orchestra and the joint choirs of KMMC Chennai students from Tamil Nadu, South India and RCS students were in full form.

The solos were perfected; the sitarist Asad Khan was ready to go with his famous “Mausam & Escape” piece from “Slumdog Millionaire”, as was Birmingham based flautist Lisa Mallet, who donned the role that Naveen Kumar usually plays. Naveen, of course, has been a part of AR Rahman’s soundtracks since the multiple award-winning “Roja”,  a film by Mani Ratnam, from back in the early nineties. Lisa’s version was somewhat different, with a haunting Celtic flavour.

The brilliant arranger and conductor Matt Dunkley, whom I’ve had the pleasure of working with, while penning the programme notes at the Alchemy Festival in 2010 and the Hollywood Bowl, LA show in 2011, both of which I attended took stage, had music filling the air to perfection. The show played to a full house, with a lot of enthusiasm from the audience, for the classically based presentation, which showed the depth and layers of music, that forms AR Rahman’s repertoire.

Performances of music suites from the films, “Lagaan”, “Swades”, “Endhiran” as well AR Rahman himself, jumping on the grand piano for the “Slumdog Millionaire” suite, were met with great applause. In his inimitable and humble style, AR Rahman said a few words, which included his famous Oscar speech phrase in Tamil, “Ella Pugazhum Iraivanukke”, which means “All glory goes to God alone”, when asked how he felt, by compere, Bobby Friction.

The next day was the private felicitation ceremony, in true Scottish academic glory, where AR Rahman received his 5th Doctorate. I had witnessed his Trinity College, Royal Greenwich, London one back in 2009 and this was indeed a wonderful and even more private and very traditional occasion. Then afterwards, there was a tour of the Royal Conservatoire, a wonderful space for the arts. AR Rahman met many of the RCS students and saw the venue, and then flew back to London and then back to India.

The conservatory students from Chennai remained for their own part in a sold out Celtic Connections show at the beautiful Kelvingrove Art Gallery and Museum.

They reprised Hindustani North Indian classical music (taught and led by Shruti Jauhari), a touch of Carnatic South Indian classical, in form of the famous Lord Ganesha Krithi (song), Vatapi, an energetic Rabindra Sangeet by Nobel Prize winner Tagore, and then a joint song with the Lewis Psalm Singers of Glasgow in the Scottish Gaelic language.

Adam Greig of the KMMC, a Scotsman himself, facilitated this, alongside the executive director of KMMC and sister of AR Rahman, Fathima Rafiq, who was not in Scotland but oversaw it all, from Chennai, India, such is the power of technology today.

It was quite a ride for some of the students, who had never gotten on a plane, and a few who had never left India – experiencing the warmth of the Glaswegians, as well as discovering the Scottish love for Indian food, like dosas and gol guppas, rose infused gulab jamuns. It was indeed quite a cultural learning experience for them and also for me.

* Cineworld has three branches in Glasgow, including a state of the art mollusc shaped Glasgow Science Centre Imax branch.

Privacy & Cookies: This site uses cookies. By continuing to use this website, you agree to their use.
To find out more, including how to control cookies, see here: Cookie Policy
← Shoojit Sircar – Bollywood maverick on his film aesthetic, whom he admires and his next work
Tears, jeers (about it being all in Hindi) and tribute by Kapoor family on the icon that was Sridevi (IFFI 49) →