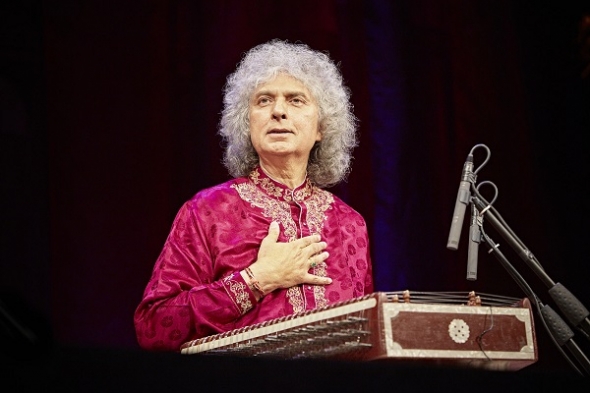 Sunday (October 13) will see Pandit Budhaditya Mukherjee on sitar and Rahul Sharma on santoor close out this year’s Darbar Festival at the Barbican Centre in London.

The two will play late night ragas (classical compositions). Pandit (a term of veneration) Budhaditya Mukherjee has been described as the ‘sitar player of the century’ and has travelled all over the world playing concerts.

Emanating from the Imdadkhani gharana (school of music), he is well known for his fast playing and emitting a sound that is rather like a voice – and some have likened this style to khayal vocals.

He is widely regarded as a pioneer of his art form. He is accompanied on tabla by Soumen Nandy who returns to the festival for the first time since 2014.

The second part of the bill sees Pandit Shiv Kumar Sharma and his son Rahul Sharma take to the stage with santoor. Shiv Kumar (also written Shivkumar) is widely credited with bringing the santoor – a folk instrument into the classical dimension. The 100-string creation was first seen in the Kashmir Valley and remains popular in folk music from the region – in the 1940s and 1950s, the ‘Sufiana Mausiqi’ was very popular.

It was Shiv Kumar’s father who began to introduce the instrument to a more classical environment.

Son Rahul is just 22 but already has carved his own place in the music scene. Signed by pop impresario Peter Gabriel and a regular at the WOMAD (a UK-based world music festival), he has numerous CDs to his name.

Accompanying the pair will be Pandit Yogesh Samsi on tabla and Eeshar Singh on tanpura.

Samsi is a disciple of Ustad (another term of veneration) Alla Rakha, widely regarded as one of the greatest tabla players of all time and a contemporary of Shri Ravi Shankar whom he accompanied on many occasions in concert.

The double bill gets under way at 5pm.

Playing from 4pm in the Barbican Hall Foyer (free) is Unnati Dasgupta. She sings tracks from her recent released debut solo album – ‘Indigo Soul’ – though trained in the classical tradition, her music reflects her wide musical tastes and in her voice you can hear the influence of pop, soul, jazz and rock, to name just a few. She plays at the EFG London Jazz Festival with Jyotsna Srikanth (violin) and Alex Smith (piano) next month, as well. In August, Unnati (her artist name) played the prestigious The Pheasantry Jazz venue in Chelsea, London.

For those interested in the Indian classical music scene and the growth and development of women in it, a panel of eminent artistes come together to discuss progress and impediments and will broach the subject of #MeToo as it affects the classical music scene too. The contributors are Kala Ramnath, Charumathi Raghuraman, Sudha Ragunathan and Manjiri Asnare Kelkar.

At midday, the Gundecha Brothers will perform on the Tanpura. Often used as background music in both Hindustani (North Indian) and Carnatic traditions (South Indian), it creates a vital atmosphere for other classical instruments. The brothers widely famed for the agility on the tanpura will demonstrate and discuss the instruments’ purpose in Indian classical music.

This afternoon (2pm Saturday, October 12) sees an afternoon of Sarangi soul. A bowed string instrument popular in Indian classical music, these afternoon ragas will be performed by cousins Sabir and Momin Khan.

The evening (6.30pm) sees Manjiri Asanare-Kelkar on vocals and Jayanth on flute. It is a UK first for Asanare-Kelkar, schooled in the Jaipur-Gwalior style of khayal vocals she is a rising star of this tradition.

In November, Darbar dance returns to Sadler’s Wells from November 23-26. Look out for our special previews coming soon – sign up to our newsletter to find out more here (see tab in top left – subscribe!)

For more on the final 2 days of concerts see: https://www.darbar.org/

Privacy & Cookies: This site uses cookies. By continuing to use this website, you agree to their use.
To find out more, including how to control cookies, see here: Cookie Policy
← UK Asian Film Festival 2019: Ramesh Sippy interview, Closing Gala: Radhika Apte, Kiran Juneja Sippy, and picture gallery, coming soon…! (Click to enlarge)
Ramesh Sippy – director of legendary Indian film ‘Sholay’ talks about his career and what he wants to do… →