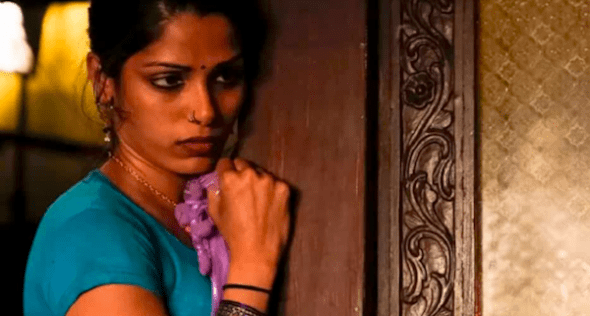 THIS is a new film – directed and co-written by Tabrez Noorani, the Indian origin now LA-based producer of ‘Slumdog Millionaire‘ – that exposes the tragedy behind sex slavery and human trafficking.

It is not an easy watch but compelling. Ted Caplan and Brit-born Alkesh Vaja (now based in LA) developed the script.

The story is drawn from real events and centres around Sonia (Mrunal Thakur, a newbie) and her sister, Preeti (Riya Sisodiya) who  live in a small village 1,400 kilometres from  Mumbai where their taciturn father, Shiva (Adil Hussain) tries to eke out a livelihood by trying to grow stuff on his arid small holding. He is in debt to the local landowner ‘Dada Thakur’  (Anupam Kher) and he continually bemoans his fate of having girl children.

Sonia and her sister are quite close – the older one is pretty and then dad does the inevitable – which is to sell his daughter to the local landowner, who then traffics her to the big city on the pretext that she will get a good job as a maid.

Sonia, the headstrong sister, follows her and is determined to bring her back and then we see at close hand how young girls are lured by a “nice woman”, Anjali ( Sai Tamhankar).

Sonia is thrust into a brothel amidst the dark and dingy alleyways in Mumbai where she meets two seasoned sex workers, one of whom is ‘Rashmi’ played by Freida Pinto, and the other is Madhuri (Richa Chadha), and the boss, Faizal, (Manoj Bajpai) who always refers to her as his ‘daughter’ but when he is renting her out tells potential customers that the  “seal should not be broken”.

The language is very strong in parts and some scenes are hard to watch and stomach. At one point, Faizal offers Sonia to a stranger in return for a few puffs of a cigarette!

‘Love Sonia’ gives you a glimpse into the brutality inflicted on these trafficked women and how global the sex trade works.

It also shows the application of activists who endeavour to rescue girls from brothels and Noorani, who has waited over a decade to make this film, was also engaged in this mission.

In fact, the character of activist ‘Manish’ played by Rajkummar Rao is said to be drawn on him.

Sonia has some opportunities to be rescued but doesn’t take them because she is really determined on rescuing her sister and knows that once she leaves the underground world of sex trafficking, it will be harder to find her sibling.

**(When she is finally ‘ready’ (I use the word advisedly), she is shipped in a cargo ship container along with other women to Hong Kong, where she is forced to ply her trade again, but it is here she gets a vital break through Madhuri and is eventually rescued.

However that is not the end of her difficulties, because we do see women like Sonia attempting to carve out a new life, but the prejudice and cultural intolerance can be further impediments toward complete rehabilitation.

The ensemble performance from the whole cast gives the film further weight with a guest appearance by Demi Moore and Sunny Pawar (of ‘Lion’ fame, as a street urchin).

Noorani has brought attention to a real global problem and while the film is harrowing and powerful, he has not lost sight of it being a form of entertainment too and something you must – at least if not or can’t really enjoy – then, have empathy for Sonia and her fight and that of many like her.

Suffice to say, Noorani keeps your attention and it is never clear (in the film) just how Sonia is going to find her sister – or whether she ever will, really.

‘Love Sonia’ releases in the UK on January 25

The film had its world premiere at the London Indian Film Festival in June 2018. We were there.

Interview with Richa Chadha on eve of premiere https://www.periscope.tv/asianculturevul/1MYxNqbwBpRJw