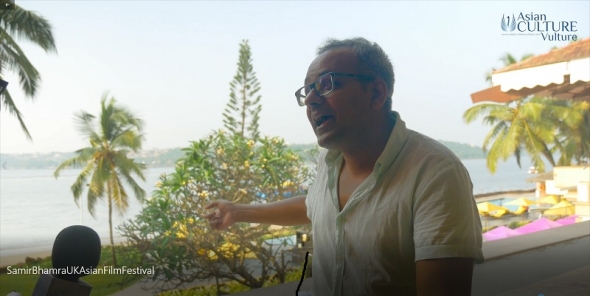 Interview with creative director and latest on festival…

We are the digital partners of the UK Asian Film Festival and have been since 2017.

Remember the festival is a nationwide affair and films will screen in Edinburgh, Glasgow, Leicester, London and Manchester.

You’ll hear important announcements about the festival here and we will be carrying interviews and stories in the run-up to the festival, during and after, so do not miss out! Follow us in whatever way you want… and in real time (see links below).

We’ve got experience of covering festivals from Cannes to the International Film Festival and Awards Macao (IFFAM) which is only three years old and to which we were invited to attend last year – December 8-14.

We have a team of presenters and journalists who will be help to enhance your viewing both at UKAFF and some of the other large festivals closer to home.

You can see our other festival coverage by clicking on our festivals tab on the home page. Look out of the next international festival, which starts this very week 😉 !

We were able to catch up with UK Asian Film Festival creative director Samir Bhamra in Goa last year at the trade section, Film Bazaar, which is one part of the International Film Festival of India (IFFI).

Expect a strong line up as Bhamra discusses what impressed him as he sourced films for this year’s UKAFF and what sort of themes have emerged from new films over the last year or so from the region.

• You can volunteer for the festival in 2019 see http://tonguesonfire.com/volunteer-application/

• There’s a screening of the box office hit and critically acclaimed, ‘Lipstick Under my Burkha’, the film screened at the UK Asian Film Festival before it did in India in 2017, where it was shrouded in controversy after being initially banned there. Eventually the censors did relent and the film by largely unknown director Alankrita Shrivastava (and featuring Rana Pathak – wife of Naseeruddin Shah – and Konkana Sen Sharma, among the better known of the cast), went onto be very popular, despite having no recognised Bollywood glamour stars – everyone here thought…what was all the fuss about? The Thursday night screening is officially sold out but there were a few tickets available for Friday evening (February 22) when we looked (January 21) but hurry! See https://harrowarts.com/events/lipstick-under-my-burkha/?spektrix_bounce=true

Privacy & Cookies: This site uses cookies. By continuing to use this website, you agree to their use.
To find out more, including how to control cookies, see here: Cookie Policy
← Asian women smashing it – Deepika Padukone, Lilly Singh, Priyanka Chopra and author Preti Taneja
ACV announces special reception for transgender film, ‘Ek Aasha’ at UK Asian Film Festival on March 29 Book Now! →