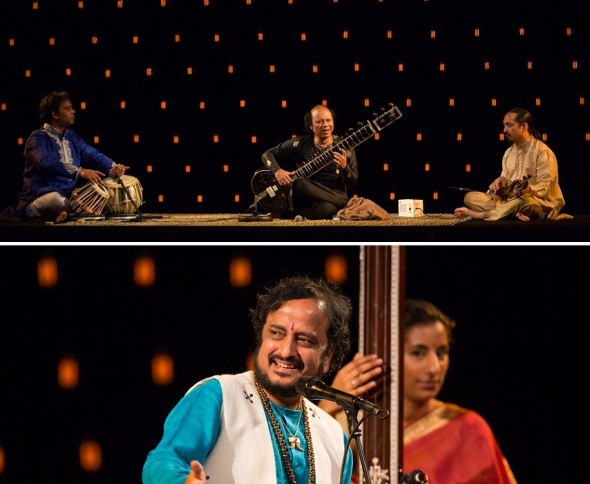 THERE was something special about the finale concert at the Darbar Festival on Sunday (November 12), bringing the curtain down on four nights of Europe’s largest celebration of Indian classical music – which has now added dance to its programme.

Devoted to Khayal (which in the Arabic means ‘imagination’), the idea was to bring two musical virtuosos in a double bill concert, where one performed a vocal rendition of this concept and the other performed the sitar as though it was singing.

The evening began with the Khayal vocalist, Pandit Kaivalyakumar, who was accompanied on tabla by Gurdain Rayatt and harmonium by Milind Kulkarni.

The tanpura accompaniment was by Sital and Kritika (sorry, no last name was given as their names were not on the programme sheet, but announced by Sandeep Virdee, artistic director of the festival).

Kaivalyakumar, who comes from the Kirana Gharana, a school of Hindustani classical vocal music which emphasizes the perfect intonation of notes, explained to the audience that he was going to use his voice in three different ways: “Bass voice, chest voice and head voice”, meaning that his singing would emanate from those areas of his body, whilst singing in an upper octave or falsetto voice, as well as continuing to breathe.

He began by singing his own composition in ‘Raag Gowki’ (we think, as he pronounced it) and through it he demonstrated his ability in being able to sing in the manner mentioned.
www.asianculturevulture.com is no expert on classical musical styles – but we will try to explain how this sounds.

It’s basically the artist breaking down the melody into syllables which are sung in the same rhythmic pattern and then effortlessly merged back into words again.

It begins in a slow tempo then the voice is raised higher and then Kaivalyakumar, almost holds his breath and comes back again on a beat.

All the while he is accompanied by the other instruments.

Kaivalyakumar followed his Raag with a contemplative thumri (a romantic song) about a lover pining for her wayward beloved – who is spending time with her rival!

And for his finale he sang a bhajan (a devotional song) on the power of ‘Sur’ or musical note, which really seemed appropriate.

Kaivalyakumar is a powerful performer and his mastery and devotion to the Khayal tradition is to be lauded.

This 90-minute performance was followed by a short break after which Kathak dance supremo and Darbar Festival dance curator Akram Khan was invited onto the stage to talk a bit about the Darbar collaboration at Sadler’s Wells.

Khan re-iterated his quest to create a space where dance and music can be celebrated and talked about the need for spiritualism and mythologies, bemoaning the lack of spiritualism.

The evening really belonged to Ustad Nishat Khan who ably demonstrated how powerful the sitar is as an instrument when it is in the hands of a master. He was accompanied on tabla by Shahbaz Hussain and on tanpura (string instrument) by Emmanuel Masongsong.

Khan told the audience that since the festival was named Darbar, a Hindu /Urdu word meaning ‘Court’ it felt it was apt, he play, ‘Raag Darbari Kanada’ (also known simply as ‘Raag Darbari’), that belongs to the Carnatic music tradition but is thought to have been brought into North Indian classical music repertoire by Miya Tansen – the 16th century composer in the Mughal emperor, Akbar’s court.

“Tonight, I will take Darbari – from the word Darbar – to play in such a beautiful atmosphere in my favourite city in the world,” said the maestro, going on to explain that “raags are like melodies and we improvise on melodies, elaborate on improvisations and passages, like storytelling with a slow part, medium part and fast part”.

As soon as his fingers touched the sitar, the instrument produced a rich mellifluous sound with every note resonating as he played.

The tone of the sound is formal, slightly solemn and it is said that this Raag is amongst the most difficult to master, inducing – as it does — serious and deep emotions in the listener (not to mention the player).

Audiences at Sadler’s Wells were enthralled with his 50-minute alaap (the improvised prologue section) unaccompanied by any other instruments.

“Every note in this raag has a profound meaning and it needs that time to go into the note,” said Ustad Khan.

The Raag has its shades and subtleties in the sound and when finally the tabla begins to accompany the sitar, something more magical happens.

The sound created is like a rock concert unplugged. Khan even adds a vocal lyric or two to sing alongside the sitar, in order to get the audience to understand that he is literally making the sitar talk reminding us of the vocal Khayal.

Although www.asianculturevulture.com wants to resist comparisons, it was hard not to get away from the fact, that Ustad Nishat Khan is the nephew of the great Ustad Vilayat Khan and the son and disciple of Ustad Imrat Khan.

Something in his playing at the Darbar Festival reminded us of that great lineage and you felt that this classical music heritage was safe in his hands.

Khan closed his concert by playing a short burst of Raag Bhairavi and the joyousness and enjoyment of the evening permeated the whole auditorium, leaving it in quiet rapture.

For more on Darbar Festival
Fore more on Sadler’s Wells