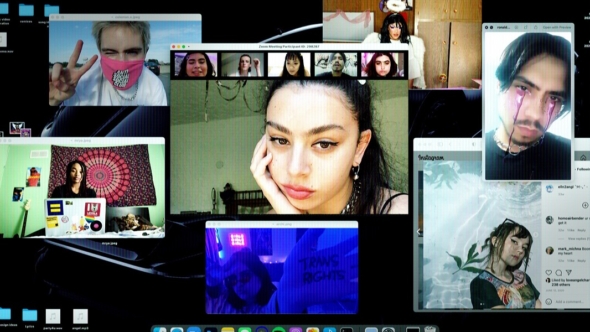 ONE OF THE FINAL SXSW major sessions involved Indian heritage pop star Charli XCX – whose lockdown documentary, ‘Alone Together’ impressed many film critics at the festival – talking about its making with her two directors.

SXSW is a multi-disciplinary festival, covering music, comedy, film, and business and is usually hosted in Austin, Texas annually in the spring. This year the festival was hosted online from March 16-20 (early Sunday morning in the UK).

Charli joined directors Bradley Bell and Pablo Jones-Soler, known for their music videos as Bradley and Pablo, and SXSW moderator Benny Drama for around 25 minutes, to talk about the process of making both the album and the film at the same time.

The 67-minute ‘Alone Together’ features many of her closest and most ardent fans, who Charli herself reached out to as the lockdown in LA began last year.

She gave herself 40 days to make the album that is ‘How I’m feeling now’ – which also blew away many music critics when it came out in May last year and has also become a huge hit.

The documentary goes behind the making of the album and the many digital collaborations, confessions and general musings of 28-year-old Charli herself, as she battled loneliness, anxiety, embarked on a live-in relationship and looked to make both music and the film that is ‘Alone Together’ – which had its world premiere at the festival. ACV was unable to see this film because of festival restrictions watching certain films outside the US, but was able to see the Zoom session about the documentary on the SXSW platform.

The documentary features many of Charli’s fans who became part-collaborators in the album and the film – and they frequently connect with her as someone who is sympathetic and positive towards the LGBTQ community. Some were given cameras to film and Bell and Jones-Soler edited the footage remotely.

Charli said so much of the pop world took a ‘BTS approach’ to creativity and she wanted to counter that and show what it was really like making music. BTS are a South Korean pop group manufactured to appeal to a global audience, both in terms of looks and sound and many would say their aesthetic is very smooth.

Charli revealed : “It was both liberating and kind of scary. Everything is so spontaneous and reactionary.

“What fascinated me about BTS – and part of the reason why I wanted to make the album in such a public way – was because there is this controlled version of BTS in the world of pop, which is so perfect. No one shows the true process.”

Moderator Drama said getting the fans to help make the album was elevating them way beyond the usual few minutes they might get in a conventional music documentary.

“They’re not like a consumers any more, they’re helping their favourite artist make a song with their words,” reflected Drama.

The two directors, who started out in animation, said usually in a music video they had control of absolutely everything, but in this process they were essentially hostages to fortune.

Bell said: “One of the things we got most out of this (type of) filmmaking is completely losing control. You just have to let the story speak for itself.”

Later, Charli addressing her collaborators and 3.6 million followers on Twitter, she told them she hadn’t revealed much about the film publicly, because it hadn’t been sold anywhere – and wasn’t sure when a wider public might be able to see it, especially those who were based outside the US and did not have access to SXSW online last week. (See post below).

Charli was born Charlotte Aitchison and her mother is from a Gujarati Ugandan Asian background.

*ACV, as part of its 2021 SXSW coverage, saw the lockdown feature ‘The End of Us’, sampled a night of comedy recorded in Atlanta, featuring upcoming comedian Shaunak Godkhindi and reported on the talk between ‘Moonlight’ director Barry Jenkins and composer Nicholas Britell about their forthcoming, ‘The Underground Railroad’ which drops on Amazon Prime in May. ACV also saw Austin-native and Youtube Yoga sensation Adriene Mishler make a welcoming address and host a breathing exercises session on Tuesday (March 16).

For this story see
http://asianculturevulture.com/portfolios/sxsw-2021-a-great-festival-experience-as-barry-jenkins-director-of-moonlight-and-composer-nicholas-britell-discuss-work-on-forthcoming-the-underground-railroad

Privacy & Cookies: This site uses cookies. By continuing to use this website, you agree to their use.
To find out more, including how to control cookies, see here: Cookie Policy
← IFFI 50 – Amitabh Bachchan and Rajinikanth steal show at opening ceremony; Italian refugee film ‘Despite The Fog’ opens fest…
Bird Bites: Unnati & Jyotsna jazz; modern take on ballad of ‘Mohaur Pala’; Six South Asian books vye for $25,000 literary prize; corporate doc has human tale of beauty and help across continents →