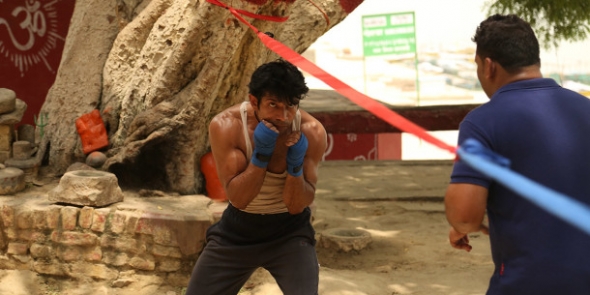 Yes it’s an Indian sports film. But not as you know it…

IF YOU’RE EXPECTING an indie flick in the vain of Anurag Kashyap’s previous outings then you’re in for a disappointment.

‘The Brawler’ (‘Mukkabaaz’) which debuted in the UK as part of the BFI London Film Festival is out and out Bollywood with all the trimmings.

Visually pleasing with a love story at the centre, a pulsating soundtrack and an evil villain; all the masala ingredients combine to create a film that’s highly watchable and entertaining, if a little long, and with a few flaws – but we’ll come on to those.

We commence proceedings in Uttar Pradesh where local, slightly cocky boxer Shravan (Vineet Kumar Singh) is on a mission to get into the Indian National Boxing Championship, securing him a job working on the railways and a hand in marriage to the girl of his dreams, Sunaina (Zoya Husssain.)

His crime is that one day he insults her uncle Bhagwan Das (Jimmy Shergill) who on that fateful day vows that Shravan will never marry his niece, nor will he ever box. And so transpires a fight for love and passion as Shravan throws himself into training, while trying to keep his promises to Sunaina that they will marry. The drama doesn’t stop there.

Bhagwan isn’t just a villain, his character is in fact the symbol of power, patriarchy, political corruptness, religious intolerance and caste inequality that exists in modern day India.

Those flaws we mentioned? Trouble is, his character’s motivations are utterly unbelievable. We watch him destroy his brother’s life by making him homeless, abuse his sister-in-law and niece, and spend all his energy on destroying Shravan simply to prevent him from playing a sport.

It seems so far-fetched and completely over the top that at times the thought of walking out of the screen cropped up. But then the addictive, powerful soundtrack kicked in and we saw our protagonist’s romance blossom, and all of a sudden the viewing got addictive.

These extreme and often clichéd moments that are sometimes difficult to watch, especially remarks about caste and power, thankfully do come together at the end.

As the film comes to a close the holes are filled with an understanding of what Bhagwan Das actually represented, it’s just a shame it takes so long to get to this point. Despite this, there is plenty to write home about and being such a long film, you’ll get your monies worth at the cinema.

Unconventional filmmaking is a strength of Anurag Kashyap’s and his cast choices are impressive.

Zoya’s character is mute so though we don’t hear her voice, she delivers her emotions and feelings wonderfully through her body language and expressions.

Vineet who has starred in Anurag’s previous films is a talented, dedicated and believable actor. His body shape seems to constantly change throughout the film as he prepares for different tournaments, even losing his facial fair changes his characteristics, adding to the truth of his performance.

The film is loosely based on a real-life character and incidents, adding to the film’s appeal.

The strongest element of the film is how it holds up against other Indian sports films which have become their own recognisable genre.

While typically they boost nationalistic values and portray rags to riches scenarios with a predictable outcome, ‘The Brawler’ sits just outside this genre.

More than a sports biopic it’s a realisation of the unfairness and discrepancies that exist in Indian sports. At one point one of the characters says: ‘more people would watch a film about boxing than they would watch an actual boxing match’.

Maybe this film will challenge that and make viewers start to have greater respect and understanding for sports people and the world they inhabit, or maybe that’s just overly romantic?

Whatever it does or doesn’t achieve, ‘The Brawler’ packs some serious punch, sending the viewer on an epic journey, which after two and half hours of viewing, will leave you with a few mental bruises, if nothing else.