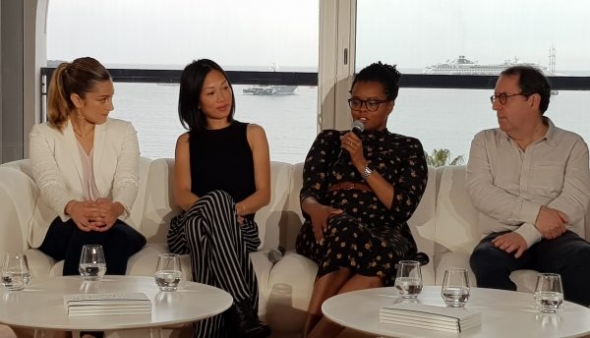 🎥 Even with actors of colour in leading roles, shooed off as quickly as possible, ethnic and minority media pushed to the back of line (yes, tell us about it…).

DISCRIMINATION is alive and well in Cannes – that may not be news to anyone, but the extent of it came as a shock to Claudia Eller – the editor-in-chief of top film trade title, Variety.

Eller made the startling revelation as she moderated a debate examining diversity and inclusion in the film industry.

“Isn’t that appalling?” she later told www.asianculturevulture.com when quizzed about the incident but could not provide any further detail.

She told the select audience of around 50 and the other personalities on the panel that she was told about a woman being asked to remove her pants to gain entry to the After Party for the film, ‘Pain & Glory’ (‘Dolor Y Gloria’ by Pedro Almodovar) the previous evening (May 17).

It wasn’t clear where the party was hosted but Eller was unequivocal in her condemnation, briefly chatting to acv post the discussion.

She told the audience: “I went to the after party for (Pedro Almodovar’s) ‘Pain & Glory’ and I was told there was a woman there wearing Indian garb – pants and a long blouse and that she was made to take her pants off so that the blouse could be her dress and that’s the only way they would let her in.”

The audience which appeared to be about 85 per cent white and 85 per cent female gasped in horror when this story was recounted.

Eller also told them she was denied entry to the gala premiere for Pain and Glory because she was wearing flats and not heels. It was only when she confronted security and told them a video of the incident would go up on www.variety.com that they relented.

“It’s a real problem that attitude and aggressiveness towards women (at Cannes),” she lamented.

ACV tweeted about the incident in real time and asked anyone if knew the ‘Indian woman’ in question.

It seems obvious the woman was wearing a Shalwar Kameez and that this fell foul of what Festival De Cannes and its partners regard as correct formal evening wear.

Eller also revealed that at a recent Variety conference on diversity star Viola Davis slammed the idea of inclusion riders.

“It surprised everyone,” Eller stated. “And I quote (Davis): ‘I don’t want to be part of any piece of paper that forces people to see me’ – that was a really interesting reaction, I respect her enormously but it really stopped me in my tracks.”

An Inclusion Rider in a contract obliges directors, casting agents or anyone involved in hiring people to make a film – to make sure they employ underrepresented groups and ensure that there is a level of gender parity in front of and behind the camera, most commonly.

Fellow panel member Jacqueline Coley, from Rotten Tomatoes, said there were both sides to this argument.

“I’m pretty much assumed to be the diversity hire in every job I’ve been in,” she responded. “There is a stigma to that. I believe I’ve got this job because of my own merits – this job and every job I’ve had – but I’ve walked into positions where they just assume it’s just because ‘they need a black woman’.

“I understand the apprehension to put this to numbers, but I also think this is one of our biggest problems in the industry and it’s unfair to assume that any idea is not worth exploration because the status quo has gotten us here.”

She said it was important for everyone today and going forward to embrace Diversity and Inclusion and diverse media.

“Everybody. And then we might see a significant change in five years. We have to be open to everything, it (the industry) needs seismic change.”

Coley went onto talk about the problems diverse media have in covering Red Carpets and big films.

Fellow panellist Kirsten Benson, vice president Global Entertainment Getty Images, told the audience that they were in the process of recruiting more female photographers and were also looking to eliminate unconscious bias, whereby pictures of non-white stars were not deemed as important as others in many instances.

Coley said recently star Halle Berry was ushered off a Red Carpet, without speaking to the two black journalists there to interview her and there only because of Berry.

“She (Berry) stopped and went back and the power really rests with the talent,” explained Coley.

More need to stand up to the gatekeepers of films and encourage Diversity, Coley intimated.

“It’s the production companies, the PRs, the publicists, the producers – if they don’t make the effort to change that, (it won’t)” she warned. “The minority publications are often, if not always pushed to the back (of the red carpet),” she added.

Also on the panel was Anita Gou, one of the few independent international women producers from Asia (her company produced Sundance hits, ‘The Farewell’ and ‘Honey Boy’ this year); and the other panellist was the token man, Michael Barker co-president and co-founder Sony Pictures Classic. His firm has more women directors at the helm than any other studio at the present time. He also acquired Caphernum by Nadine Labaki, which won a Cannes prize last year and went onto become an international hit. Labaki was invited back this year to be president of the Un Certain regard category, which is one level down from the main Competition films.

What was noticeable and interesting to acv about this particular talk was how few minority press members were in attendance.

While the Cannes Film Festival press corps more generally is better – it really is a place that welcomes many from all parts of the globe – this particular session at the Majestic Hotel in Cannes, was attended by around 85 per cent white women.

In recent times, both Toronto International Film Festival and Sundance have made conscious efforts at increasing Diversity among covering media and sponsors have backed this initiative. Dr Smith has said previously having a more diverse media and a wider pool of critics will help bring change among those making and producing films.