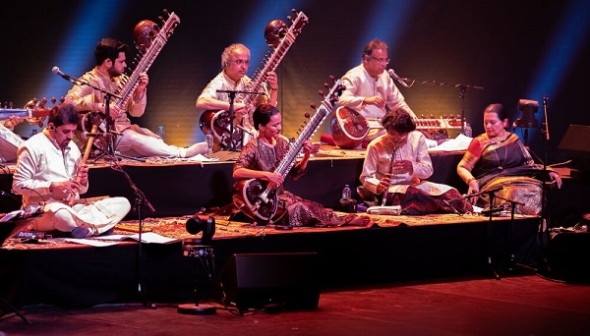 MEMORABLE and magical, last night’s concert in memory of Pandit Ravi Shankar was an inspiring feast for the senses.

Shankar 100 was originally billed to take place in April 2020 and coincide with his 100th birth anniversary but it was postponed both in 2020 and 2021 due to covid – but last night (March 5) finally it happened.

The wait was definitely worth it – moving and glorious in so many ways, the great man himself surely would have been off his feet to applaud and his heart would have swelled with both pride and love at the way these very fine musicians honoured his memory – so clearly touched by his own inspirational oeuvre.

His daughter Anoushka and widow Sukanya were joined in this Indian classical and semi-classical musical extravaganza at the Southbank Centre by an array of musical talent, all of whom had had some personal connection to the great man who put Indian classical music on the world map and took it to places no one could have foreseen.

There were his disciples on sitar – not just Anoushka, who in some ways led this from the front, as his most trusted and established devotee, if we can put it like that.

Of the famous other names who played last night – Dhani Harrison, the son of George Harrison, the Beatle who become a close friend of Ravi Shankar, or Panditji, as many refer to him; Nitin Sawhney who first recounted listening to Panditji’s music at home in Kent; and the great jazz guitarist John McLaughlin whose concerts Panditji and his legendary accompanist tabla player Alla Rakha (1918-2000) sneaked into, when they were in the US, all contributed to making the evening a celebration of musical styles inspired and influenced by Indian classical music as practised by Panditji.

The first half was more traditional and opened with Anoushka acting like an unofficial conductor (Indian classical musicians traditionally play from memory and practice).

It was an arresting sight in itself to see so many Indian classical musicians on a stage – usually there are only a handful – here you had 20 plus, though not all played during the concert.

For the aficionado and those familiar with Panditji’s lifelong work, there were familiar ragas – the very element of Indian classical music and the addition of vocals worked well.

It was hard not to be transported to one of the most magical cities on earth and the place where Panditji was himself born – Benares, or Varanasi, as it is called today. It is a holy city and its rich traditions could be heard for anyone listening with a heart so spiritually inclined.

Indeed, it is hard not to listen with your eyes, the visual spectacle itself is arresting – the synchronicity between the sitar players, the visual expressions, the energy of the virtuoso sections – there were a few, and beguiling and seductive in the way that they should be.

The second half was more Indian classical music and its encounters with musicians who learnt their craft in the west; this was no less powerful, but of a slightly different character.

And in this section, we heard more of the Carnatic (South Indian) instruments – the Mridangam, ghatam and an extended role for the mukharshanku/morsing (or Jew’s harp as it is sometimes referred to). Unusual and excellent and a reminder that there are two Indian classical traditions.

Similarly, the shehnai – so common a sound in South India in temples and at weddings and celebrations – got unusual pride of place in a couple of sections. Marvellous.

This was a reminder of the possibilities of music – of how we can be connected and transported to very different worlds and what musicians’ role is in breaking down barriers (through the practice of their art), creating memories and experiences that leave you feeling warm and positive about the human race – despite everything that is going on right now.

At the end of the two hours or so concert (with a 20-minute interval), there was a lovely touch when a mass of dancers (billed as a 100) from the Sujata Banerjee Dance Company filling out across the Royal Festival Hall – a reminder too that Panditji had started out as a dancer before switching to focusing on the sitar. Incidentally, it was announced at the beginning that Panditji had first played at the Southbank Centre in 1958.
(Sailesh Ram)

Shankar 100 – the Southbank’s celebration of Ravi Shankar’s contribution to music continues till May 15 – there is an exhibition ‘Indian Sun: Highlights from the Ravi Shankar Archive’ and three nights of Akram Khan’s ‘Kaash’ (‘If only’) first performed in 2002 – come to the Southbank Centre from April 20.

Nitin Sawhney posted about what a privilege it was to play with Anoushka Shankar: https://twitter.com/thenitinsawhney/status/1500622749676584961

Whilst Sujata Banerjee Dance Company posted the last dance sequence of the concert on Instagram: https://www.instagram.com/p/Caw2ZMOgTHS/

Finally, for those of you who weren’t there, we were able to capture the very end of this concert – see you at Kaash! (added March 11)

Privacy & Cookies: This site uses cookies. By continuing to use this website, you agree to their use.
To find out more, including how to control cookies, see here: Cookie Policy
← Terry Hall tribute from artists of colour who say the music and the anti-racism message mattered and made a huge difference…
Bollywood Bird Bites: Deepika Padukone World Cup wonder; Vedieka Dutt & Jimmy Shergill in London shot ‘Operation Mayfair’; Kareena Kapoor Khan family croissant love… →