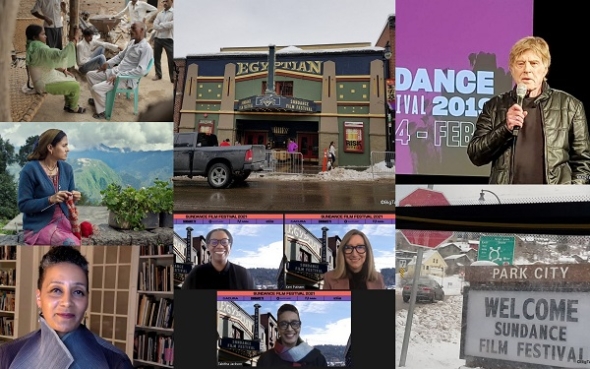 WE’RE NOT quite in Park City, Utah for the Sundance Film Festival 2021 (January 28-February 3) – but like the rest of the world we are in spirit.

We will be reporting from the festival which is totally online this year – be sure to keep a look out on social media for reviews and talk coverage.

The festival has a number of arresting digital features and has tried to recreate the experience of actually being there – but online through avatars, film chat rooms, and other forms of digital innovation.

It kicked off yesterday with a press welcome and a general festival evening one in which founder Hollywood star Robert Redford contributed. As part of both welcomes, the media and festivalgoers heard from British-born former TV executive Tabitha Jackson, who is in her first, as festival director and Keri Putnam, CEO of the Sundance Institute.

There are two Indian films in the main programme – ‘Writing with Fire’ and ‘Fire in the Mountain’. The former is a documentary and covers the stories of a media collective staffed by a group, often outcast from mainstream Indian society, while ‘Fire in the Mountain‘ is set in the Himalayas and is about the clasb between modernity and tradition as seen through a husband and wife who have a very different approach to their son’s disability. The documentary first screens on Sunday (GMT), while the other film premieres on Monday (GMT).

We’re also hoping to check in on some personalities and some talks – so stick around or keep abreast of new stories on our social media channels.

Last year, composer Nainita Desai scored the music for the critically acclaimed feature, ‘The Reason I jump’ which enjoyed its world premiere at Sundance and up and coming director Aneil Karia premiered his film, ‘Surge‘, starring Ben Whishaw at the festival. Karia also directed Riz Ahmed’s powerful and disturbing short, ‘The Long Goodbye‘ which dropped on Youtube last summer.

In 2019, we covered our first Sundance and made it to the world premieres of Gurinder Chadha’s ‘Blinded by the Light’, Mindy Kaling’s ‘Late Night’, Ritesh Batra’s ‘Photograph’ and the now International Emmy- Award winning, ‘Delhi Crime’ by Richie Mehta.

You will find interviews, videos and reviews of all these and other films we saw in Sundance 2019 either by clicking here…http://asianculturevulture.com/?s=Sundance

Or by using the search function and using the film title or director’s name for more.

Pictures: Main – mix collage courtesy of Sundance and ©BigTalentMedia from 2019

Fire in the MountainsSundanceSundance 2021Writing with Fire

Privacy & Cookies: This site uses cookies. By continuing to use this website, you agree to their use.
To find out more, including how to control cookies, see here: Cookie Policy
← ‘Darkness Visible’: : Spooky séances and devilish demons conjure up a Halloween treat of a film (review)
‘Darkness visible’: new British film represents exciting and original storyline – interview Neil Biswas →