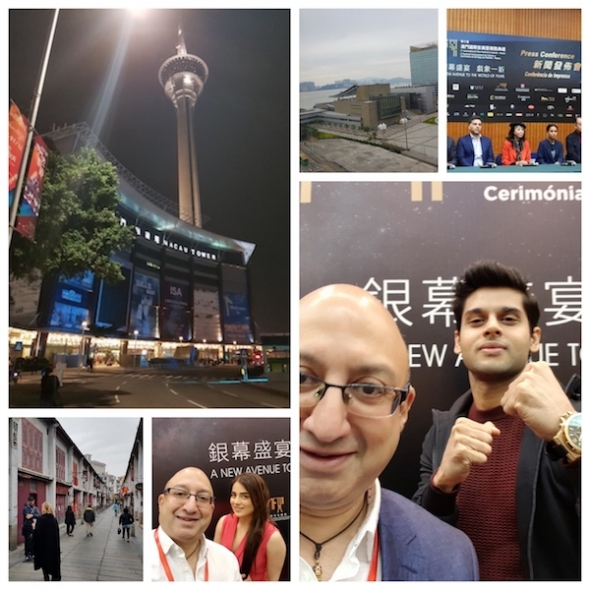 A more personal look at the festival, what we did and what Macao was like as a place to visit…

MACAO is not known for its filmmaking or its film festival but in years to come that may well change.

Invited to attend the third edition of the International Film Festival and Awards Macao (IFFAM), it was definitely a positive experience and there was enough of a South Asian angle to the content to think about it again in 2019.

While there were three Indian films in the official line up – ‘Tumbbad’; ‘The man who feels no pain’ (‘Mard Ko Dard Nahi Hota’); and Shekhar Kapur’s 1994 ‘Bandit Queen’ (chosen by Aussie director Phillip Noyce as his director’s choice), the range of personalities represented different facets of a changing and developing Indian film industry.

Shekhar Kapur is one of the few directors to straddle both Hollywood and Bollywood.

He started out in India with ‘Masoom’ and ‘Mr India’, two big hits and the latter has entered into cinematic folklore because it was a breakthrough role for Anil Kapoor and featured the late Sridevi in what was one of her most beloved of roles in a long career.

Kapur is an IFFAM ambassador and spoke to us about how the festival is growing and is like a family. It certainly has that feel – it is small compared to many other festivals and many industry players like it that way – they can get business done without rushing to the next film or meeting, reportedly.

There were just over 50 films in IFFAM, both the International Film Festival of India (IFFI) and London Film Festival (LFF) have around 250 films.

Among the official IFFAM contingent too was Tillotama Shome – the actress was the only thespian among the other director-producers on the official competition jury.

Chair of the jury was the venerable Chen Kaige, one of the undoubted masters of (Chinese) cinema.

We have an interview with Shome talking to us about her breakthrough in ‘Monsoon Wedding’ her drama education at New York University and her subsequent work in jails there developing inmates’ ability for drama.

She also talked about her starring role in ‘Sir’ a film that premiered in Cannes earlier this year and is set to come to the UK sometime possibly in 2019 now.

We were also fortunate enough to get time with two actors whose star is only rising at present.

Abhimanyu Dassani won the best new actor award at IFFAM and his lead role in ‘The Man who feels no pain’ is one that many will come to treasure in what is set to become a global cult film.

Equally his female co-star Radhika Madan has made the transition from TV to film seamlessly and is garnering much chatter also as someone who could break into commercial Hindi cinema or Bollywood, if you will.

A true Bollywood star also did make it to the festival and was presented with an award too.

Zaira Wasim can be seen in ‘Dangal’ and ‘Secret Superstar’ with the iconic Aamir Khan and spoke to us about her burgeoning career.

Her award by trade mag, Variety, as a Rising Asian star seems entirely justified – at just 18 she already has India in her hands and China too seems to following behind. Both films were hits in China.

Away from the festival itself, Macao is an interesting and intriguing place.

Some of its fascination and charm is beautifully depicted in the one film screened at the festival, actually set and shot on the island.

‘Empire Hotel’ is an extremely stylish and atmospheric noir type thriller made by Ivo M Ferreiria and it’s a shame IFFAM couldn’t find a way of drawing further attention to this absorbing feature.

The mix of cultures from Portuguese, Chinese and quite a bit in between makes for an interesting society dominated by the island’s gargantuan casinos.

All the big Casino corporations from Las Vegas are present in Macao. There are thought to be 60 in all and when they were first constructed analysts thought it would take about 20 years for the investment to be recouped – it took just nine months, apparently and some time back, Macao overlook Las Vegas in terms of casino revenues.

There are huge shopping malls inside the hotel-casino complexes with many well-known Western brands.

Macao that way is not a cheap place and most of its holidaymakers – about 80 per cent from mainland China are looking to splash the cash even before they get into a casino.

It isn’t the greatest place for a vegetarian either – but there are some local eateries that do a simple rice/noodles and vegetables.

All in all, it was a great experience – it is a window to China and Chinese filmmaking – we will look at the new Chinese strand before the year is out.

There were some interesting British features too at IFFAM – ‘Scarborough’ – writer-director Barnaby Southcombe won an IFFAM award for his screenplay.

‘Mary, Queen of Scots’ enjoyed an Asian premiere and its weight of leading performances suggest it might grow into an awards contender.

Cult director Ben Wheatley was also at IFFAM with ‘Happy New Year, Colin Burstead’. A film we saw at LFF, it will have its fervent supporters and is set to be screened on telly back home at some point.