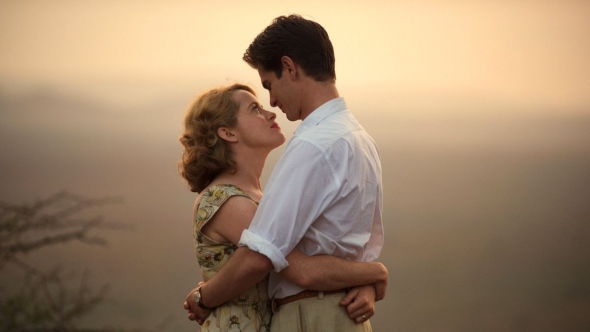 THEMES such as hope and positivity have long been at the heart of an opening night film at the BFI London Film Festival and ‘Breathe’ joins that line-up.

In the same league as last year’s ‘A United Kingdom’ by Amma Asante, ‘Breathe’ too is a biopic in which the unconditional love of strong, bold, fearless wives is what ‘saves’ the men in their lives.

A lesson in love, life, marriage and humanity, it’s easy to sit back and think you are watching a fairytale, yet ‘Breathe’ isn’t just a true tale, it’s the story of the Producer Jonathan Cavendish’s own parents, Robin (Andrew Garfield) and Diana (Claire Foy).

His father Robin contracted polio at the age of 28, paralysing him from the neck down and ‘Breathe’ reflects the journey he and his family went on, adapting to life with a severe disability.

The scenario is shocking, but what is more so, is how soon into newly-wed life Robin gets struck down by this debilitating illness.

At the time of his diagnosis Diana is pregnant, yet she knows then, that she will commit her life to caring for her now disabled husband, who requires 24-hour care.

It’s hard to fathom how one can function with such lifestyle changes but director Andy Serkin’s interpretation of this true story is one that is honest and loving.

We see compassion in a whole new light; the pulling together of companions, siblings, colleagues, medical professionals: all willing to do what they can to make life as satisfying as it can be, when you are living with limitations.

Andrew Garfield’s portrayal of Robin is thoughtful and measured. Other than talk, make facial expressions and gently shake his head, he cannot do anything for himself – even breathe.

Tied to a ventilator for his entire existence, his character shows us the beauty of being a human by simply ‘being’, rather than trying to be.

Though given just months to live after his initial diagnosis, Robin becomes one of the longest living responauts in the UK and he spends his time as generously as he can, raising awareness and becoming a pioneering advocate for disability as well as helping to invent the earliest wheelchair.

Poignant moments are aplenty like the tender moments between Robin and Diana which have a fun playful tone.

Diana’s twin brothers (played by Tom Hollander who excels in this dual role) brings a positive presence each time they appear and it’s a nice to see British Asian actor Amit Shah make an appearance as one of Robin’s doctors.

There’s also a notable unexpected scene in Spain where strangers come together to celebrate Robin’s life, a scene in the story where composer Nitin Sawhney really goes to town with fun, festive music, which also makes an appearance in the end credits. Elsewhere he treats us to a score that’s perfectly positioned for the decades that pass from the 1950s to the 1980s.

A rewarding watch ‘Breathe’, like many biopics before is an important watch that re-affirms how important it is to tell the stories of real people as their stories are far more relevant and inspiring than fiction will ever be.

‘Breathe’ opens in cinemas in the UK nationally on October 27