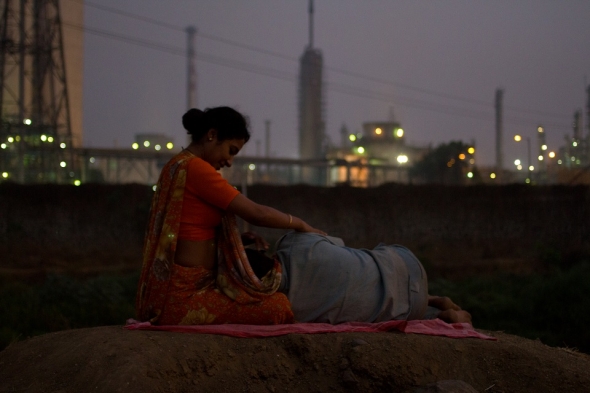 Director and co-writer Ravi Kumar’s “A Prayer for Rain” about the Bhopal tragedy is a powerful drama that does not tow a particularly political line and chooses to focus on human stories in the run up to what remains of one the worst industrial tragedies of our age. It is estimated that 10,000 perished within a couple of weeks of the fatal gas leak at the plant in December 1984.

Both are taut dramas, filled with tension and foreboding, and draw audiences into relatable characters and stories without seemingly battering them with a distinct message.

But both filmmakers, based in London, are acutely aware the subject of their films are not ‘sexy’ and constitute a hard sell.

Last night in Q&A session following the screening at the ICA in London of “A Prayer for Rain”, Kumar said: “It’s about the death of 10,000 people and there is no hero.”

Producer Michael Ryan said that the Cannes Film Festival had turned down the film because it was too “commercial”.

“It’s a difficult film to market, it’s not a documentary”, said Ryan answering a question about why an Indian film company had not made such a movie.
Much of the financing came from Indian conglomerate Sahara, which responded very positively to Kumar and David Brooks’s script. “While it’s an Indian story, it’s quite difficult for an Indian company commercially,” sugested Ryan.

The film does not have UK cinema release distribution deal in place at the moment, but Ryan is showing the film to potential buyers and hoping that a social media buzz around the film will project it into cinemas around the world. This year also represents the 30th anniversary of the tragedy.

He wants “A Prayer for Rain” to be seen as an international movie.

“I don’t want it to be specifically an Indian movie about an Indian problem,” he explained.

It certainly is an international movie – among the lead characters is Martin Sheen (the liberal President in “The West Wing“), Kal Penn, who starred in the Harold and Kumar stoner films, and Mischa Barton who lends a distinctly Hollywood dimension to proceedings.

She plays a glamorous French/American journalist who is on assignment tracking down the descendants of the French Bourbon dynasty in Bhopal (based on a real life article). Also in the film are Tannishtha Chatterjee (Brick Lane) and Fagun Thakrar who was also present for the Q&A.

The audience reacted extremely well to the 100-minute film last night and among them was Gurinder Chadha, the director of “Bend It Like Beckham”, who also commended Kumar as first time director, on his handling of a multi-national cast.

She tweeted that she found the movie “amazing” and “a must see” and praised the performance of Penn, who plays a local journalist, whose suspicion that all is not well at the chemical pesticide plant owned by US company, Union Carbide, turns out to be correct.

For some, their treatment of Anderson would be too soft – still alive and living in Florida, he has always denied the American parent firm had any responsibility for the tragedy.

Brooks said: “They said Union Carbide India was a different entity and it was their problem.”

While Union Carbide was subsequently sold to Dow Chemical and a measly $470 million was paid to the Indian government in 1989 in compensation – in contrast to other industrial disasters such as the 2010 BP oil spill off the Coast of Mexico which cost that firm billions – legal contests continue. The film draws the contrasts in compensation in its closing credits.

Khan’s “Honour” mines a very different territory but is no less powerful in its desire to hold people to account.

Wanting to reflect the multi-cultural Britain he saw around him, Khan in a Q&A session after a screening of the film on Saturday (March 8) at Genesis Cinema in Whitechapel, said he wanted to produce a film (that in a DVD) could sit happily alongside “The Godfather”.

His tale of a modern young Asian woman falling foul of her family’s expectations to marry the man they chose for her is not rooted in total fiction.

There have been cases in Britain where young women have been murdered by their own families or who have disappeared without trace.

Khan weaves the family dynamic well and in creating the elder macho brother – who will defend the family’s honour at any cost – he has produced a character as compelling and as powerful and pathological (in his moments) as Travis Bickle in Martin Scorsese’s classic, “Taxi Driver”. There is also an interesting twist in this character’s set up, played excellently by relative newcomer, Faraz Ayub. The film also stars the very watchable Paddy Considine.

Khan told the audience that Considine was vital to the project and that without him the £2.5 million budget film would not have been possible.

Khan also revealed that his next film, which he has already started working on, will be called “Patrol” and based on the vigilante Muslim patrol that sprung up in the Whitechapel/Tower Hamlets area, defending what is saw as a ‘Muslim area’ from activities it regarded as ‘non-Islamic’.

“Honour” will enjoy a limited cinema release next month and Khan accepted it would probably have a longer life as a DVD and had more digital possibilities. He hopes it will get some international play too.

Along with “Kami’s Party” and “Unforgiven”, which www.asianculturevulture.com also saw, Asia House should be commended for its 10-day 10 film screening festival, spotlighting work from the whole continent, giving filmmakers a platform and connectivity they might not otherwise enjoy.

We certainly hope more people get to see both “A Prayer for Rain” and “Honour“.

Both address important issues, but do so in a way that is both entertaining and character-driven, allowing audiences without any prior knowledge or experience of the subject matter to gain a better understanding of complex problems; and just as importantly, if not more so, are entertaining and enjoyable.

Pciture: Tannishtha Chatterjee and Rajpal Yadav in “A Prayer for Rain”