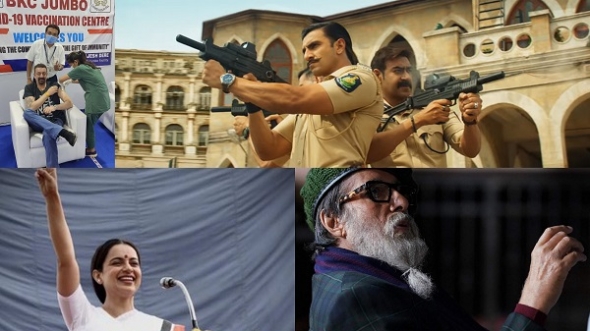 As India’s movie capital Mumbai gets hit by a second Covid-19 wave cases, and the megapolis moves towards a night-time curfew and a full lockdown in some localities, last month’s optimism has given away to uncertainty…

MAHARASHTRA is on the back foot, India itself stands on the edge of another covid precipice and parts of Mumbai have already imposed local lockdowns – the movie world is holding its breath…

Just when you thought everything was normal, it turns out that covid has quietly been doing its potentially deadly business…

The capital city of India’s film industry and home to most of its megastars is already reeling from news of this star or that testing positive for covid and filming having to stop or break schedules.

A slew of releases slated to open in April are on the brink and with Mumbai malls having to shut at 8pm from tonight, some of the bigger and grander cinema multiplexes will inevitably take a hit. Footfall will again take a tumble as people inevitably vote with their feet.

Now for the rollcall of those who we know have been infected.

Megastar Aamir Khan tested positive on March 24 while shooting for an ad with actor Kiara Advani. He has now gone into self-quarantine at home. Even the shoot of his film ‘Laal Singh Chaddha’ has been stopped along with that of ‘Bhool Bhulaiyaa 2’ after its lead actor Kartik Aaryan tested positive. Kiara Advani and director Anees Bazmee, who are part of the project, tested negative for the virus.

Advani, Bazmee and Alia Bhatt got themselves tested but produced negative results. Bhatt has still gone into isolation. The trend is likely to continue for some time as the whole of Bollywood is out on set working – at least was until last week.

On the other hand, many actors have got themselves vaccinated to set an example.

Reportedly, Bollywood has already lost 50 per cent of its revenue due to the covid situation last year. The second wave is likely to further affect the industry’s dwindling fortunes. Just as films such as ‘Roohi’, ‘Sandeep Aur Pinky Faraar’ and ‘Mumbai Saga’ were about to hit theatres, new covid cases started gaining pace.

Secondly, many of the cinema halls are located in shopping malls, where patrons are now allowed entry only after testing negative for covid; the tests are being conducted at the entry points of all malls. This changed scenario is deterring people from watching films at cinema halls, which are only authorised to run at 50 per cent capacity.

As of now, April has a lineup of movie releases (please see below). As of today (March 27), the release of ‘Bunty Aur Babli 2’, which was scheduled to release on April 23, has been postponed indefinitely.

For now this is the picture…

Koi Jaane Na – April 2
Director – Amin Hajee
Featuring Amyra Dastur, Kunal Kapoor, Elli Avrram, the film is about a writer, who is unable to find the lead for his novel. He then starts writing murder mysteries and lives the life of the murderer in his novel.

The Big Bull – April 8 on Disney+ Hotstar
Director – Kookie Gulati
Co-produced by Ajay Devgn, this film is based on the life of stockbroker Harshad Mehta, who was the kingpin of India’s infamous securities scam in 1992. Mehta used to manipulate stocks by illegally borrowing money from banks. The film stars Abhishek Bachchan, Ileana D’Cruz and Mahesh Manjrekar.

99 Songs – April 16
Director – Vishwesh Krishnamoorthy
The film has been co-produced by AR Rahman’s YM Movies. Rahman has written the film as well as composed its music. Starring Ehan Bhat, Edilsy Vargas, Tenzin Dalha, Lisa Ray, Manisha Koirala and Remo Fernandes, the movie is about a music obsessed man’s fall and rise and is inspired by Rahman’s own experiences.

Babloo Bachelor – April 16
Director – Agnidev Chatterjee
Sharman Joshi plays a man who refuses to marry the character played by Pooja Chopra because she is not a virgin. He then decides to marry Tejashree Pradhan’s character, who runs away to Mumbai on the day of the wedding.

Thalaivi – April 23
Director – AL Vijay
The film’s story is based on the life of J Jayalalithaa (played by Kangana Ranaut), a former actress and then chief minister of the Indian state of Tamil Nadu. Arvind Swami, Prakash Raj, Madhoo, Bhagyashree play supporting roles.

Chehre – April 30
Director – Rumi Jaffery
Not much is known about the plot of the film other than the fact that it’s a psychological thriller, where Amitabh Bachchan plays a lawyer, while Emraan Hashmi is a business tycoon. Krystle D’Souza, Rhea Chakraborty, Siddhanth Kapoor also star in the film.