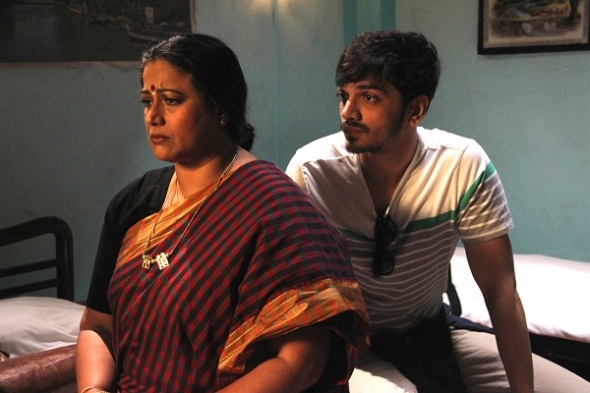 LOVE is such a precious gift that we should never lose it lightly – whether it’s a recalcitrant partner or a dear family member, effort and application are sometimes very necessary.

Kartik (Devansh Doshi pictured above) returns from the bright lights of Mumbai to his family home in the South of India on a short holiday and must negotiate the looming storm and fall-out.

An only son and with an overbearing, domineering and insufferable father, you fear almost immediately for the young, happy-go lucky, but well-settled young Kartik.

He has left behind his long-term partner in Mumbai and the two worlds are like planets in different solar systems.

Set against the backdrop of the fight to have Section 377 (the infamous outlawing of homosexual relations) withdrawn a couple or so years back, this is a powerful tale of love and the need for people to show understanding.

A photographer by trade, Kartik’s mere existence is an affront to his high caste Brahmin father, who expects his son to inhabit a profession or at the very least, a secure government position.

Almost immediately battle lines are drawn as Kartik finds himself at the heart of a marriage proposal and an arranged ‘tea’ with the daughter of a close family friend.

Naturally, he recoils but desists from making any scene and harbours his secret while he plots a strategy.

The common assumption that Kartik does not fancy her – has someone in Mumbai of the female variety – persists and his father reckons a slow campaign of attrition and quiet cajoling will bring him to the fire (which prospective couples circle in Hindu wedding ceremonies).

The sumptuous setting and relaxed air, desensitise Kartik – on a boat trip with his mother, he tells her he is gay.

She almost has a heart attack and falls into the water. Rangayan delves deep into her psyche and comes up with original images and this section is imaginative and effective – in showing Kartik’s mother’s most deep-seated fears.

Rangayan ratchets up the tension as a decision on 377 gets closer and the distance between mother and son following the revelation remains, a distance of galaxies.

It would be perhaps unbecoming to reveal the rest – except father takes none too well to some innocent pictures of Kartik and his boyfriend.

There are elements of South Indian cinema melodrama, but generally Rangayan maintains tensions and credibility and the climax is in keeping with the pace of the film.

Mention should also be made of mother – Mona Ambegaonkar (pictured above) and father – Ananth Narayan Mahadevan; both give assured performances that allow Kartik to modulate from despair to hope and optimism about his future.

Aside from an uncomfortable uncle sub-plot, (consensual, but between an adult man and a boy), this is a watchable film that shows there is a way to go before India accepts same sex relationships – and not just in the name of the law of the land – last year Section 377, relating to homosexuality, was taken off the statue books, finally decriminalising same sex relations in India. (Sailesh Ram).
Acv rating: *** (out of five)

Privacy & Cookies: This site uses cookies. By continuing to use this website, you agree to their use.
To find out more, including how to control cookies, see here: Cookie Policy
← UK Asian Film Festival 2018: It’s a wrap as stars turn out for feel-good closing film ‘Boogie Man’ and festival awards presented…
Diversity in the Arts debate – Cambridge Union panel including Sailesh Ram, acv editor, want those in power to help spearhead change… →