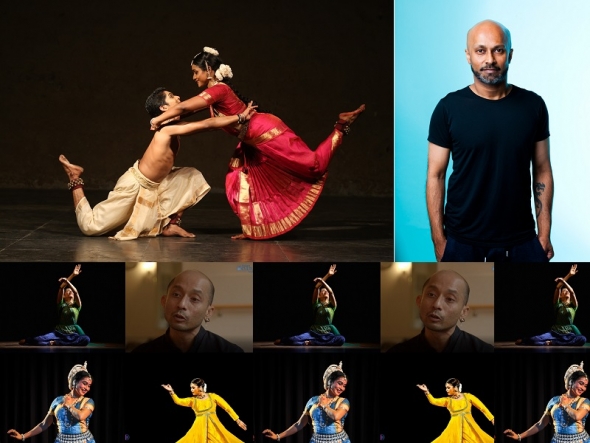 THERE is no better champion of Indian classical dance in Britain than Akram Khan.

His curation of Darbar – the dance segment of the Indian classical music festival returns to Sadler’s Wells in London this year and is undoubtedly a powerful statement of artistic intent in his hands.

It is not just a showcase for the best of the traditions for its short two days of performances, from Saturday, November 24 – but a way of reminding ourselves what is at stake for us as sentient and intelligent beings and how we should approach life itself.

“Indian classical dance, and dance in general, is extremely important for our well-being, partly because technology has allowed us to escape from our bodies,” said Khan talking to www.asianculturevulture.com last month.

“We are becoming more disembodied from our own bodies.”

His words have an urgency and a political dimension and put the role of art and the artist at the centre of the ongoing debate about ourselves and how we choose to live our lives.

“We sit in front of a desk, we sit down with a tablet (or a phone) and our relationship to our bodies is the last – and yet it is the closest organic thing to us.

“We are very detached from food,” he asserted, emphasising that while we all need food to survive, few of us think of it in such stark terms.

As he reminded us, we have unthinkingly relegated that which makes us human and social beings in our day to day lives.

Dance reminds us of our bodies and our social relations and goes back to a time when (virtual) language was not the sole means of communication and sharing experiences.

“Our relationship to food happens in a supermarket, before we were hunter-gatherers. We are removed from our bodies,” Khan argued.

“Dance helps us to reconnect to our bodies. It’s easier for us to move in the virtual world than it is in the real world. Dance is a way of reconnecting with the body.”

He was in philosophical overdrive but the patrons of Indian classical dance would surely only concur. And not just them – increasingly human experience is mediated through a digital form and not the one of lived and shared experience.

Darbar is a celebration and a spectacle and is a form of entertainment – but it also has a deeper purpose too, Khan argued.

“It’s about excellence,” he continued. “It’s about collecting and accessing and connecting with an art form – hundreds of years old.

“How is it relevant today?” He asked out aloud.

“By posing questions and presenting a wonderful representation of the art form.”

The importance of myth of revisting and re-examining it through dance.

He describes the two days of performances as an umbrella and indirectly a way of providing shelter and sustenance to all those who enjoy the form and want to share in its brilliance.

This year the emphasis is on duets, working and collaborating together.

Last year, Darbar in its inaugural edition at Sadler’s Wells, had solo performances and traditional Indian classical music concerts alongside.

This year there are duets dancing to live orchestrations – something that is not always possible in the UK.

“It is about two bodies being connected to each other as an art form,” Khan asserted.

The first evening sees a new and dynamic generation of bharatanatyam performers in Renjith Babu and Neha Mondal Chakravarty perform an evening of bharatanatyam (the dominant tradition of classical dance in South India) and reprise the style of jugalbandi (duet).

World-renowned dancer Mavin Khoo, who performed so memorably at the inaugural Darbar has been working with Babu and Chakravarty (see the acv video coming soon to Youtube channel – subscribe and don’t miss!) and will conduct the live orchestra on the evening. There will be vocals from Vishnudev Namboothiri.

Khoo will conduct a special Abhinaya workshop on the Sunday – open to anyone to attend – with aspiring classical dancers. He will conduct the workshops with live music and will perform a short excerpt himself. (See our video interview for more).

Later that evening, Sujata Mohapatra will take to the main stage as one part of a double closing bill.

Described as ‘Indian dance royalty’ and presented with the prestigious Sangeet Natak Akademi award only last year, she will perform Odissi – a style of dance from Eastern India – as opposed to Khan’s style which is Kathak and rooted in the music and dance of North India.

Closing this year’s festival is Gauri Diwakar who will perform ‘Gati Meri’ (‘Let my salvation be in the supreme’) a sublime solo in four parts inspired by Sufi poetry.

This performance has been choreographed by one of the most iconic figures in Kathak today – Aditi Mangaldas, who also featured in the first Darbar at Sadler’s Wells last year.

Khan himself will no doubt elaborate on some of themes he talks about in this interview – in his curtain raiser talk on Friday evening and which sees Darbar open its heart and welcome all.