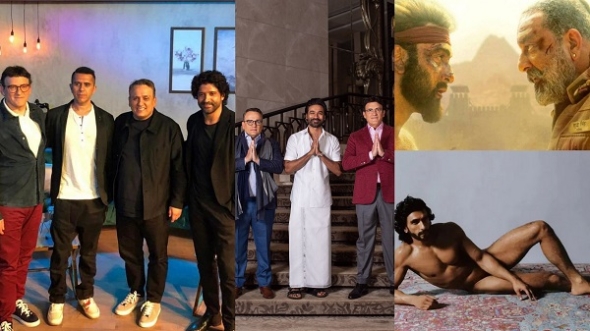 As ‘Shamshera’ stumbles at the box office and the Russo brothers charm India with their Mumbai appearances, it’s a nude that’s making the most noise…

Welcome from a rainy Mumbai. The city received one of the heaviest showers in the month of July. Thankfully, there wasn’t any damage to life or property or Bollywood movie sets, which usually fall prey to the monsoon fury annually. But many of the celebs, who are relentlessly followed by the paparazzi these days, were photographed facing discomfort while posing for pictures in the wet weather.

The much expected ‘Shamshera’ staring Ranbir Kapoor, Sanjay Dutt and Vani Kapoor, which was promoted for weeks, has got a lackluster opening at the box office. Made on a budget of £14 million, one of the highest in Bollywood’s history, the period drama has so far collected just about £4m. www.asianculturevulture.com asked whether there was anxiety about its release and both Malhotra and Kapoor responded – see here.

Film pundits believe the movie could end up making losses to the tune of £6-7m. There have been a string of other failures this year – Badhaai Do; Jhund; Rashtra Kawach Om; Khuda Haafiz: Chapter 2; Attack; Heropanti 2; Runway 34; Jersey; Anek; Dhaakad; Samrat Prithviraj; and Jayeshbhai Jordaar are the other failures of this year.

The latter two come from the same stable that has made ‘Shamshera’, Yash Raj Films. The film is now headed to the OTT (over the top, the popular term in Inida for streaming or digital services) platform and reports say that could be as early as mid-August.

Staying with streaming, it has been now decided that all movies starting August 1 will release on OTT, eight weeks after their theatrical debut. Immediately after the pandemic ended, movies started performing disastrously at the box office and production houses, along with exhibitors, started selling movies to OTT platforms at the earliest.

At this point these platforms also started paying huge sums for these movies. Soon, a four-week rule was brought into force, which helped producers recover their investments. But as theatres started filling up considerably, producers and exhibiters decided to go back to the eight-week arrangement which was the norm pre-pandemic. So, films such as ‘Raksha Bandhan’, ‘Laal Singh Chaddha’, ‘Liger’ and ‘Brahmastra’ will hit our smaller screens post eight weeks.

Currently, another direct-to-release digital movie ‘The Gray Man’ is turning heads in India. And the primary reason for all the eyeballs it is receiving is actor Dhanush, who stars in it along with Ryan Gosling and Chris Evans. (Seen our interview with the Russos and Dhanush?).

Last week, directors of the £165m spy thriller, brothers Anthony Russo and Joe Russo, who are known names in India because of ‘Captain America: The Winter Soldier’, ‘Captain America: Civil War’, ‘Avengers: Infinity War’ and ‘Avengers: Endgame’, flew down to India to promote the film.

Just before the film’s worldwide release on July 22, it premiered in Mumbai; Aanand L Rai, Vishal Bhardwaj, Jacqueline Fernandez, Randeep Hooda, Alaya F along with the Russos and Dhanush attended the do.

The Russos also held talks with filmmaker Ritesh Sidhwani and actor/producer Farhan Akhtar, who own Excel Entertainment, about producing films among other things. This was followed by a lavish party hosted by Sidhwani at his residence. It may be noted that parties for Hollywood celebs, and international musicians or bigwigs from other professions from the west, are usually hosted by Shah Rukh Khan at his Bandra pad Mannat.

In fact, Sidhwani had to step into SRK’s shoes as he is shooting in London for Rajkumar Hirani’s ‘Dunki‘, though wife Gauri Khan and son Aryan Khan made it to Mumbai social.

As for the movie, Dhanush is present in three action sequences and plays an extended cameo. The general view in India is that Dhanush’s talent in the movie has been wasted, considering he is rated as one of the best actors of his generation.

At this juncture, it is unclear what kind of response ‘The Gray Man’ has received on Netflix in India.

Finally, as far as Bollywood is concerned, it may come as a surprise that the person who is ruling the headlines right now is not Dhanush or the Russos.

It is Ranveer Singh, who posted photographs from his nude photoshoot for New York magazine, Paper, on Instagram.

A police case has also been registered on the actor in Mumbai for ‘hurting sentiments’. This has led to intense debates on TV and social media about what constitutes obscenity. Singh hasn’t commented yet on the controversy. ‘The Gray Man’ is now passé. It’s now Mr Singh’s turn to take centre stage. Until then…