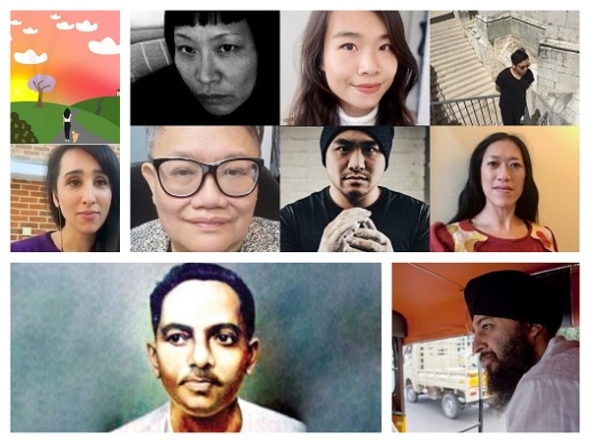 Misunderstood ‘Chinese New Year’ (?) and the concept of home…

MOONGATE MIX salon-style sessions will resume on Monday (February 7) at the Omnibus Theatre, after its successful line up of events in September last year. Presented by Moongate Productions, the event will be a panel discussion on what the term ‘Chinese New Year’ means to East and South-East Asians living in the UK, as well as the meaning of ‘home’. Curated by Moongate Production’s co-founder Jennifer Lim, there are six panellists from China, Vietnam, Malaysia, Korea and Hong Kong. Lim hopes to dispel the westernised term Chinese New Year- known in Asia as ‘Lunar New Year’- because it, “gives the sense of racialising a major festival that is being celebrated across East and South East Asia, so is not exclusively Chinese. It’s also celebrated in Korea, Japan, Singapore, Malaysia, Taiwan and Hong Kong,” she told www.asianculturevulture.com
She added “I thought the term itself could be a lot more inclusive, so I’ve put a very diverse panel together, and it’s going to be a wonderful opportunity for us to have these progressive conversations”.
The session will also screen a short film – ‘Home’ by Lucy Sheen. Lim explained: “I want Moongate Mix to be a place for people to be able to come to congregate and have conversations, as well as interrogate – obviously there’s the fun part which is networking, having food and connecting with each other, but it’s also to actually take a much more in depth look at issues that affect us.”
ACV reported on the first Moongate Mix last year which brought together a high-powered arts panel to discuss the term ‘Asian’ in the UK and how covid had exacerbated racism and exposed different forms of discrimination suffered by British East Asian and South East Asian groups in the creative sector. ACV Associate Editor Suman Bhuchar was among the panellists.

FORGOTTEN poet Jibanananda Das (1899-1954) is widely revered in world, Indian and Bengali literature, and to celebrate his 123rd birthday, Ahmed Kaysher, the co-founder and director of Saudha, Society of Poetry and Indian Music, has curated an event – ‘Re-interpreting Jibanananda Das’, which sheds new light on his works and his melancholy – this time through music and dance.
During his time, Jibanananda belonged to a group of poets who were inspired by western and Bengali and poetry, writing about the urban present and the lonely self. Kaysher told acv: “We have had a fanstastic response since we created this festival and it is in the third year now. Many western academics were not aware of his work as a poet who addressed modernity and issues such as solipsism, loneliness and depression.”
This year’s live event takes place on February 20 at the Rich Mix, East London and will re-interpret some of his major works. Among those appearing are Dr Nandini Chatterjee, professor of South Asian History at the University of Exeter, Oz Hardwick writer and professor of English at Leeds Trinity University, Shahaduz Zaman, a writer, Poppy Shanaz and Manash Chowdhury, spoken word artists, and several others. Singer Amith Dey and dancer Sharmishtha Pandit willl also feature. Last year Kaysher talked to acv about Jibanananda’s rich legacy.

TALKING about the issues that face Indian classical musicians in Britain is just one part of a wider conversation Bridge India has in its new ‘Voices’ podcast series with Sandeep Virdee OBE, the founder and director of Darbar, one of the largest annual Indian classical music festivals in Europe.
Bridge India podcast hosts, journalist and TV comedy writer Ali-Asghar Abedi, who is based in New York, and former diplomat Mark Runacres, who has been following Indian affairs for many years and now based in London, quiz Virdee about the state of South Asian art and artists globally.
Bridge India, the not for profit organisation think tank, aims to create better understanding between India, the disapora and the world, describing its new podcast series, launched on Friday (January 28) as seeing issues, through a “global Indian lens”.
Link: https://www.bridgeindia.org.uk/voices-podcast/

What gave you joy during the pandemic?

JOURNALIST and acv presenter Attika Choudhary is launching a new project which she hopes to turn into a published book, ‘Diary of Reflections’ (working title) – which looks at the way people coped positively or not – during the pandemic and lockdown.
She launched the global call-out with an animated video, voiced by ‘Poldark‘ actor Christian Brassington on Tuesday (February 2), and broadcast it across her personal social media channels.
She requested people to submit poems, quotes, stories, artwork and/or drawings that reflect the things that helped us all get through the dark days.
“In the midst of a very challenging time, where have you found joy and hope?,” She asked on her call-out. “Maybe you found a quotation, or a poem that really spoke to you; maybe your child painted a touching picture, or you were inspired to make a drawing that reflected your feelings at the time. Art and stories are the metaphors of our humanity”.
Choudhary, who has campaigned for better mental health, has hosted two series of the ‘Positive Solace’ podcast and hopes to include some of her own reflections and thoughts gleaned while making the the ‘Positive Solace‘ episodes since 2020. L’Oreal ambassador and acting icon Mahira Khan, TV and film director James Bamford, actor Brassington, actors Branwen Summers & Elisha Applebaum and entertainment star Ali Zafar, and well-known broadcaster and psychiatrist Dr Kamran Ahmed, were just some of the people she talked to about mental health and wellbeing in her podcasts.

If you want to see the animation and the ways to submit material, click here https://www.instagram.com/p/CZcfY9Ehz_N/

Don’t forget to book your ticket!

Some adjustments have been made to this page since its original publication yesterday (February 3) – Sincere apologies on the Re-interpreting Jibanananda Das Festival, some details were inaccurately transposed from an old, undated website page from the same festival in 2021. This has now been corrected.

Privacy & Cookies: This site uses cookies. By continuing to use this website, you agree to their use.
To find out more, including how to control cookies, see here: Cookie Policy
← Bollywood asianculturevulture vibes – Industry woes; ‘The Gray Man’, Dhanush and Russos party together in India; Ranveer Singh ‘naked’ controversy…
Proms: Puja Panchkoty helps to present CBeebies ‘Ocean Adventure’; Amjad Ali Khan and sons; and conductor Alpesh Chauhan… →