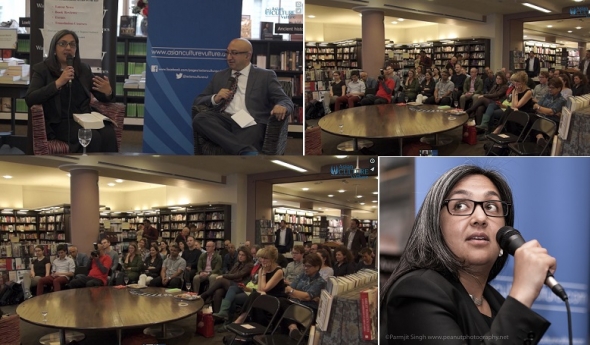 BOOKS: Preti Taneja reads from her debut novel, ‘We That Are Young’ at Waterstones Piccadilly, London at an acv/www.globooks event – unquestionably one of the books of the year and it won rave reviews when it hit the bookshelves in August. Expect to hear a lot more about this novel and Taneja in the coming years. She and it are that good.

DANCE/MUSIC: Both Shobana Jeyasingh’s ‘Bayadère – The Ninth Life’ and the dance events at the Darbar Festival were a particular highlight. Bharatanatyam was well served in Jeyasingh and Mavin Khoo, while Akram Khan and Aditi Mangaldas flew the Kathak flag high.

ART: The #NewNorthSouth initiative in around Manchester and involving art galleries and museums. There are a wide range of South Asian artists’ work still on display (many still to February). This was not just a token gesture but something deep and committed and will continue…and inspire a new generation of local artists.

THEATRE: It’s very hard to pick a single play out in this fashion, but Tanika Gupta’s ‘Lions and Tigers’ at Shakespeare’s Globe was a powerful reminder that youth and passion can sometimes leave a rich and haunting legacy. Equally, ‘A friend’s story’ (Shakespeare’s Globe) and ‘Night’s End’ (Soho Theatre) shows there is a space for Indian theatre. Also mention must go to Sudha Bhuchar’s ‘Child of the Divide’ (on tour) for the way it gets people (and children in a very engaging way) to think about the politics of division and what it means for humanity in the widest possible sense. Debutant playwright Shivali Bhammer showed much promise in her ‘Borders in a Bedroom’ at (Tristan Bates, London) about a Hindu-Muslim co-habiting couple negotiating the personal and the political in Donald Trump’s America.

‘Child of the Divide’ – Actor & writer Sudha Bhuchar on her play and the line, ‘People should belong to each other and not to places’…

TELEVISON: Without question, ‘The Boy with the Top Knot’ (BBC2) proved TV drama need not be simple and ‘dumbed-down’ to work. The TV adaptation of Sathnam Sanghera’s much acclaimed memoir was powerful in subtly challenging so much of the guff regarding mental illness and conditions such as schizophrenia. It also said something about growing up as an Asian in Britain in the 1990s. More please…

‘The Boy With The Topknot’ – Best BBC commission of the year?

Sathnam Sanghera much acclaimed memoir, ‘The boy with the top knot’, will feature Sacha Dhawan and Anupam Kher in BBC TV drama version