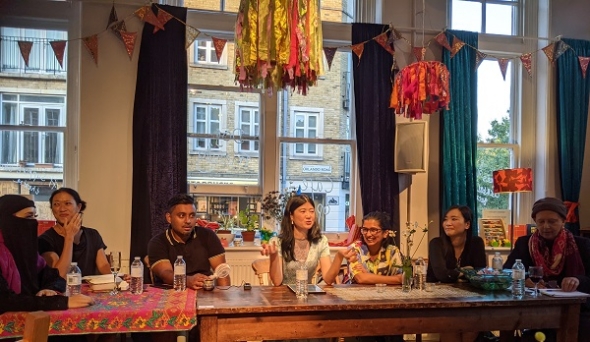 CREATIVES and others who use the word, ‘Asian’ must be conscious of the people it excludes – and the term does little justice to the complexity of different heritages seen in Britain, a high-powered panel agreed on Monday (September 6).

Meeting at what is the first in a monthly saloon, known as Moongate Mix, at the Omnibus Theatre in South London, the panel also wanted people from different ‘Asian’ backgrounds to continue to talk, work more together, organise and seek better understanding among those who have power and control funds.

They thought that in part some of the challenges of both the pandemic and Black Lives Matter have opened up the possibility of more dialogue, engagement and ultimately, action between Asian communities which can lead to change and improvement in treatment for all diverse groups.

They also thought people in power, gatekeepers and funding bodies had to be more imaginative and not simply reflect or represent current prejudices and discriminatory practices.

The panel and the talk, which was centred around the word ‘Asian’ and its meaning was chaired by Jennifer Lim. She is one of the people behind Moongate Productions, which has a residency at Omnibus and produced ‘WeRNotVirus‘, digitally last year. The company produces stories for both stage and screen from creatives with heritages from East Asia and South East Asia.

Lim asked the panel to address issues sparked by the pandemic, especially the racism it seemed to encourage with descriptions such as ‘Chinese virus’ and ‘Indian variant’, often only exacerbating existing or latent prejudices. She felt there was an opportunity with dialogue to turn negatives into positives and create a more healthy environment for all.

Dr Diana Yeh, from City University, who specialises in issues of diversity and also has a focus on the creative industries, said covid 19 and the racism it sparked had galvanised different groups to work together.

She called it “an historic moment” and urged people to see beyond individual violence and hate and broaden the fight for better treatment.

“It (violence) is blamed on a working class white bigot who is a bit crazy – that is how it is seen as rather than the racism which is reflected in all structures,” said Dr Yeh.

Radhika Aggarwal, writer and theatremaker, felt there was a greater commonality to the Asian diaspora than was being represented and that funding opportunities available tended to narrow options rather than widen them.

“It is all like set budgets and set voices,” she stated.

Suman Bhuchar, theatremaker and www.asianculturevulture.com associate editor, said that racism had to be called out and institutions like the BBC had to recognise the need to better reflect the society they purported to serve.

She said the BBC Asian Network didn’t appear to acknowledge any other Asian community – other than the South Asian one. She also said people had power as TV licence payers and should lobby institutions to seek better representation across the board.

“They’re simply not enough Asian stories whether they are South Asian or not. I don’t want to tell a story just to tick a few particular boxes,” she said.

Abdul Shayek, artistic director of Tara Theatre, welcomed the exchanges and said his own space was open to more debate and engagement from different minority communities. He felt the divisions were historic and part of a toxic colonial legacy.

“The thing that continues to separate and segregate us is white people – that’s the reality of it. It is the lust for power and control over large parts of the world,” he explained.

Joy Mohammed, who goes under the moniker, JM Arrow, and identifies as mixed race, queer, British South East Asian and Muslim, said she had been shocked by the way some people, who share some of her own identities, had reacted to the racism exacerbated by the pandemic.

She also said there seemed to be little understanding or appreciation of the range of identities people often exhibited and that misleading media narratives stoked division and antipathy.

“It was quite embarrassing I saw members of my own community say things like ‘now, you know what it feels like’,” she said referring to discrimination against East Asians seen at the outset of the pandemic.

She said the Muslim community had been vilified over the years and similar negativity was being expressed towards East Asian and South East Asian heritage communities.

Mingyu Lin talked about her experiences as a theatre director – she has worked with Tamasha – which was originally created to tell stories about South Asians by South Asians but has more recently widened its remit.

She said jaround 40 per cent of the population in London was born outside the UK but it was not reflected anywhere. She also said people of colour represented the majority of the global population – but the predominant lens continued to be white.

This was a view echoed by the whole panel at different times during the wide-ranging discussions that covered not just the meaning of the word Asian, but representation and the way people are treated by the NHS, ethnic classifications in Britain, and the awakening of a new activism and consciousness inspired by Black Lives Matter.

Initially, the panel discussed the history behind the description, ‘Asian’ and how in different parts of the world it means different things. In North America and Australasia, it refers to East Asians and South East Asians, whereas in Britain, Asian means South Asian.

Moongate is planning a series of similar saloon type discussions between creatives of ‘Asian’ heritages with food and networking opportunities each month – if you want to know more, see (Entry £3-5; food and bar separate) https://www.omnibus-clapham.org/moongate-mix/

A stastistic was misquoted – the number of people living in London but born outside the UK was not 60 per cent but is 40 per cent. Sincere apologies for the error.