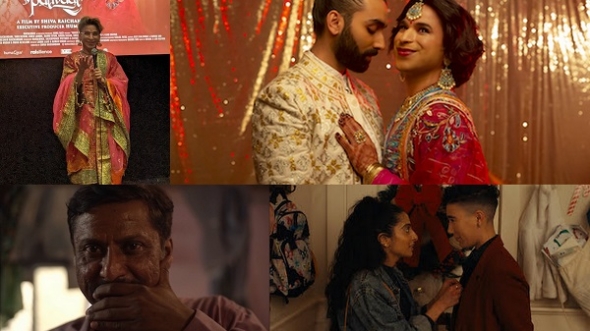 DEBUTANT narrative short film director Shiva Raichandani’s ‘Queer Parivaar’ (‘Queer Family’) has just had a couple of screenings at the BFI Flare Festival (March 16-27) and the young filmmaker might feel at the vanguard of a changing environment for non-binary creatives.

The high profile London LGBTQIA+ Film Festival organised by the British Film Institute (BFI) is in full swing in its second week of screenings now – and two other South Asian queer themed shorts, ‘Sunday’ by Arun Fulara and Fawzia Mirza’s ‘The Syed Family Xmas Eve Game Night’ have screeed. (See our reviews of these films below).

Both ‘Queer Parivaar‘ and ‘The Syed Family Xmas Eve‘ screen at BFI Flare again on Sunday (March 27) but tickets are limited (see below for details), while ‘Sunday‘ can be viewed online, as the festival continues (also see below for viewing details).

Both Raichandani and Fulara will discuss the state of international South Asian Queer filmmaking at a panel debate in London this evening (March 24) with another director Pradipta Ray whose short film ‘Muhafiz’ screened at BFI Flare last Friday (March 18) and Saturday (March 19).

The three directors will address a conversation titled, ‘Desi Pride’ at the Nehru Centre with author and activist Raga Olga D’silva moderating. Trailers of Ray and Raichandani’s films will be screened, along with the full version of ‘Sunday’. (See below for further details about the panel talk, it’s free and will be shared online, post the event).

www.asianculturevulture.com talked to Raichandani about his first narrative feature which is 27 minutes long and has a number of noteworthy actors – including the big screen debut for Britain’s first out and proud Muslim drag queen Asifa Lahore, iconic British DJ and activist Ritu Khurana – better known to many, as DJ Ritu, and Intersex activist Anick Soni.

In ‘Queer Parivaar’, a mysterious older woman, played by Taru Devani, reveals a long lost family secret to Madhav (played by Raichandani himself) on the eve of their wedding to Sufi (Raimu Itfum).

Raichandani wanted to create a film that is as much a celebration, as it is a story with its own power to move and entertain.

Described as a musical, it has contributions from Bollywood favourite Bombay Jayashri, as well as composer Rushil, who works with British and Sufi sensation vocalist Abi Sampa. Leo Kalyan is another leading artist lending his voice to the film.

“It stemmed from wanting to see something that I felt I could relate to, or that spoke to my experiences, and then when having those conversations I realised there are so many of us who didn’t have that, who craved for that, and who wanted that,” Raichandani told acv.

The wedding setting was a way for Raichandani to appeal to a universal audience, as well as a queer one.

“A wedding is so culturally relevant and important to the South Asian experience but is also a great medium to bring sensitive topics, because of how universal the subject of weddings and marriage and love is,” he explained to acv in a Zoom interview just prior to the film screening at BFI Flare.

For them, featuring a wedding and the issues of love and romance from a queer perspective was also a way of exploring sensitive issues.

“You drop in topics of queerness and identity and gender dysphoria in a subtle way, so that it allows for people irrespective of background and experience to take away and resonate with something. There are universal themes of identity, family, love and all those things,” Raichandani said.

One of the things they are most proud of is that of the 120 people who worked on ‘Queer Parivaar’ – 90 per cent of them were LGBTQ+.

Raichandani remembers camera assistant Faizal Khan coming up to them, saying it was the first film set where he felt safe in just being himself, “without having to worry about masking his identity. Sometimes on a film set it’s hard to gauge how much you can be yourself”, they pointed out.

Raichandani told acv about their own experiences in another creative field where they found it awkward being just themselves.

“I started as a trained dancer in Bharatanatyam, which is one of the Indian classical dances,” they said when asked about how they got into filmmaking. But “classical dance can be very rigid in the sense that it doesn’t allow for room to explore concepts like gender and those nuances and struggles, and that was absent in my practice.”

It gave Raichandani a sense of wanting to do something that was true to their spirit and personality and not have to hide or camouflage who they really are.

“When you seek out queer stories, then you realise it’s not even there, outside in the realms of the mainstream media.

“So I thought about how I can create space for those stories. Music, film and art has been a place of solace and comfort, and an outlet for me, and then that made me really understand the power of film, media and stories.”

The film was made with crowdfunding – compromising 150 individuals worldwide and first time producer Huma Qazi who told a special screening in London pre-fest that it had helped her to break out of the isolation she had long felt.

Raichandani is currently finalising the details to an LA premiere of ‘Queer Parivaar’ and hopes to have it screen at more festivals globally.

They are currently working on a number of projects which they are not at liberty to talk about – quite yet. Raichandani’s first film is a Netflix documentary called ‘Peach Paradise’.

Raichandani, who was born in Hong Kong, has worked as a consultant and speaker on inclusive practices with a number of blue chip companies and media firms and grew up Dubai and Indonesia, while being educated in India – they consider themselves very much a global citizen.

Last week, Jameela Jamil voiced her support through her partnership with I Weigh and urged people to watch the film “at a festival near you” and called it “captivating”. We reported it in our BFI Flare briefs page.

ARUN FULERA’S ‘Sunday’ while only 10 minutes long, is definitely worth a watch. This love story of an elderly man who falls in love with his barber is minimal on action, but each shot is calculated and serves a purpose. The few long shots of the man, as he stares longingly at the barber as he cuts another man’s hair, and the full shot of the barber himself are suggestive of the love between them, and is rather sweet to watch. The film ends with a smile on the man’s face as he stares at his newly shaven beard as if has been reawakened by just a small interaction with the barber. Acv rating: *** (out of five)

COMEDY short, ‘The Syed Family Xmas Eve Game Night’ by Fawzia Mirza couldn’t be more different to Fulara’s. Instead of subtlety, the film tackles controversial questions head on. Pakistani heritage Noor brings her South American girlfriend Luz home for the first time and Noor’s family keep making silly mistakes; calling Luz ‘butch’ without knowing she was there; and Noor is convinced that her domineering sister is homophobic, just like their father. It’s all harmless in the end, and the many comedic moments throughout keep tough topics light-hearted. ACV rating: *** (out of five)

‘Sunday’ is available on Youtube as part of the British Council’s Five Films For Freedom and available until the end of the festival…
https://youtu.be/0Zp6IdV9fFo