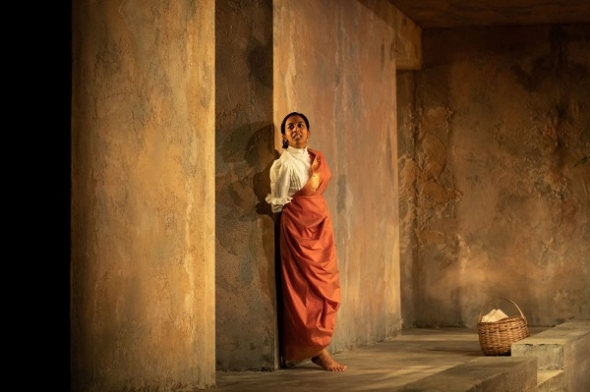 ANJANA VASAN who was the star of the recent Tanika Gupta Ibsen adaptation of ‘A Doll’s House’ has been nominated in Best Actress category at the Evening Standard Theatre Awards.
Vasan announced her excitement and incredulity on Twitter on Monday (November 4). See below…

Among the contenders for the best actor award is Wendell Pierce for ‘Death of a Salesman’ at the Piccadilly Theatre. www.asianculturevulture.com has just seen the play and will publish a review shortly – keep tuned!
The Evening Standard Theatre Award winners will be announced on November 24 at the London Coliseum.
You can see the full list of nominees and other details here.
https://www.standard.co.uk/go/london/theatre/evening-standard-theatre-awards-2019-shortlist-in-full-a4277791.html

LOLITA CHAKRABARTI’s stage adaptation of the Booker winning novel ‘Life of Pi’ was a big winner at the UK Theatre Awards at the Guildhall on Sunday the week before last (October 27).
It scooped four awards in all – best play and the best performance for Hiran Abeysekara, as well as the director award for Max Webster and best design for Nick Barnes, Finn Caldwell, Carolyn Downing, Andrzej Goulding, Tim Hatley and Tim Lutkin. The production was mounted by Sheffield Theatres.
The play transfers to the West End (Wyndhams) in June 2020 until October 2020 and booking is already brisk.
For more on the awards: https://uktheatre.org/training-events/uk-theatre-awards/uk-theatre-awards-2019/
Booking Wyndhams: https://www.lifeofpionstage.com/

Esh Alladi also scooped the award for best supporting performance in ‘Hobson’s Choice’ at the same UK Theatre Awards. He didn’t react on Twitter directly to this accolade but the medic and thespian did retweet those who congratulated him – among them playwright Tanika Gupta whose adaptation of the play set in the North of England in the 19th century and transposing it to an Asian family (Hari Hobson) living in the 1980s won rave reviews earlier this year when it played at the Royal Exchange Theatre in Manchester.

TODAY (November 6) sees Tara Arts’ women writers group take centre stage to explore, ‘Objections to War’.
The show builds on the Brown Girls’ Book Club in May – a sell-out and defining moment for Tara associate artist Anjali Chadha who presents this evening’s programme.
Principally about war and opposing violence, the show responds to “to theme of conscientious objection that underlies Kamila Shamsie’s award-winning novel ‘Homefire’, as well as Michael Mears’ extraordinary one-man show, ‘This Evil Thing’ , the young women writers have been working since August to develop their personal responses to principled objections,” explains the theatre in Earlsfield, South London.
Tickets/Info: https://www.tara-arts.com/whats-on/objections-to-war

SHAWAB IQBAL is the new executive producer at Eclipse Theatre – a black touring company which is moving its base from Sheffield to Leeds.
It’s a new position within the company for Iqbal, who is senior artistic director at The Bush Theatre in West London currently.
He is an experienced producer who works across theatre and dance, and is also Participation Producer at Hip Hop dance company, Boy Blue presently.
A qualified teacher and former ChildLine counsellor, he has an extensive CV as a producer and was at the Theatre Royal Stratford East and worked for Matthew Bourne’s New Adventures previously. He’s also a trustee of Tamasha theatre group.
There’s also a new chief executive and artistic director role for Amanda Huxtable who takes over from previous head Dawn Walton, who had been there for 10 years.
Huxtable is a theatre director based in the North and is developing an immersive theatre production based on award-winning poet Jackie Kay’s novel, ‘Trumpet’ with Vanitas Arts and has worked across a number of theatres both in the UK, US and Canada.
In September, Stella Kanu became the new chair of the organisation.
Eclipse is committed to developing new artists and producing a diverse programme of not just theatre, but also work in film and radio in the UK. Its next work is ‘The Gift’ touring in Spring 2020.

MADANI YOUNIS is stepping down as artistic director of the Southbank Centre next month – sparking off speculation that one of Britain’s leading – if not most prominent – arts spaces is finding it difficult to ‘walk the walk’ on diversity.
That was pretty much the sentiment of experienced reviewer (of the Guardian for many years) and theatre commentator Lyn Gardner. She suggested that the Southbank Centre had a hard time reconciling the need to appear diverse and open to community and artist involvement, while maintaining a traditional and established programme. Change is never easy and while many institutions profess a keenness and interest in diversity, implementing it can be more challenging than it might appear on paper.
Younis was the former director of The Bush Theatre in west London and turned it into a hub for community activity, while maintaining its reputation for radical and challenging work that gave expression to Britain’s and London’s diverse communities.
His resignation, announced on October 23, came out of the blue. A press release from the Southbank Centre said Younis would leave next month, to “pursue new creative opportunities”.
Earlier this year, www.asianculturevulture.com discovered that 10th anniversary of the multi-arts festival at the Southbank Centre, Alchemy had been pulled this year.
http://asianculturevulture.com/portfolios/southbank-centre-tells-acv-there-will-be-no-south-asian-themed-arts-festival-this-year-after-nine-years-alchemy/

LONGTIME theatre critic and widely seen as the doyenne of British play reviewers, Michael Billington is stepping down from his role as the Guardian’s chief theatre critic.
He has served the one newspaper for nearly 50 years and is estimated to have written 10,000 reviews in his time. Now 80, the Warwick School and Oxford University graduate, will continue to write for the paper and will assume his present role until December. A new critic will be announced in due course.
More: https://www.theguardian.com/stage/2019/nov/05/guardian-theatre-critic-michael-billington-to-step-down