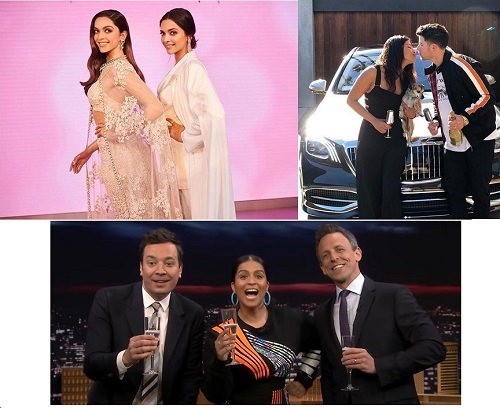 Best viewed on desktop or tablet*

DEEPIKA PADUKONE has a permanent presence in London now and a double celebration is in order…
The Bollywood superstar was at Madame Tussauds yesterday for the unveiling of her wax work.

Many remarked on just how good the model looked compared to the real Deepika herself.

The Bollywood star said she had never imagined being included in there and dedicated the model to her Live Love Love charity which is active in the area of mental health.

She was the first big Bollywood star to talk openly about her own mental health and depression some years back and gained many plaudits for doing so.

She said: “The cause of mental health is very close to my heart. It is something that I am extremely passionate about. I said that’s it, I would like for my fans, when they see my figure, I hope it reminds them of someone who did something for the cause of mental health, who worked towards creating awareness and destigmatising mental illness. I hope that it gives people a sense of upliftment and a sense of hope. I hope that message comes through.”

Flanked by husband Ranvir Singh, fresh from the triumph of his latest film, ‘Gully Boy’, the pictures are a delight to Deepika and her legions of fans (33 million plus followers on Instagram).

Padukone is also on the front cover of Vogue US of its issue next month.

She features in article about 14 global superstars from 14 different countries. She is on the front with Hollywood star Scarlett Johansson and Doona Bae from South Korea.

We interviewed the star in Cannes last year.

SHE is the darling of Youtube and now she has made a long-awaited move to TV – proper, some might say.
Lilly Singh is to host her own show on NBC this September (Fall), called ‘A Little Late with Lilly’ and she will appear on a segment after channel fave talk show icon Jimmy Fallon, and writer comedian and broadcaster Seth Meyers. The programme will be a mixture of studio-chat and her own skits.

It’s a massive breakthrough from the digital world to mainstream broadcasting for the Youtube sensation who started making self-made videos from her bedroom in Toronto, Canada.

She developed her channel (aka Superwoman) mainly through comedy skits and also collaborations with other YT artists in both comedy and music – and more recently has featured Michelle Obama, Priyanka Chopra (in a comedy skit) and Mila Kunis on her YT Channel.

The psychology graduate has had parts in Hollywood films more recently too.

She moved to LA more than a couple of years back and has some 14 million followers on her YT channel.

Her book, ‘How to be a bawse’ is a New York Times bestseller.

ACV interviewed her in February 2014 in London and she expressed a desire to make it in Hollywood – she was about to leave for Mumbai that time and said she wanted to use Bollywood as a stepping stone to getting the promised life in LA. Looks she didn’t bother too much with Bollywood really…

She also talked to Sunny from Sunny & Shay about her favourite films – Sunny had a film column in acv at that time. Their hilarious conversation is below…

ANOTHER woman of Indian origin who is attracting a lot of media attention is Bollywood star, now Hollywood pin-up, Priyanka Chopra.

Her nuptials last year and almost seemingly endless honeymoon period continues – with pop star husband Nick Jonas celebrating his and his brothers’ return to the No1 spot in the US charts with the song – ‘Sucker’ – by buying his wife a new car off the back the success.

Chopra Jonas (as she refers to herself sometimes) looks quite pleased…

ON A TOTALLY different level but no less impressive in many ways is news that British author Preti Taneja’s award-winning novel, ‘We that Are young’ is to be turned into a TV series.

ACV hosted a pre-launch reception (see link) and chat with the literary sensation in July 2016 – sometime before she won the Desmond Elliott Prize for a first novel.

Trade mag Variety reported that the French studio Gaumont which makes the hit series ‘Narcos’ was talking about a TV adaptation with Indian producer Dina Dattani, who had acquired the rights not long after the novel was published in 2017.

The book is searing epic based on the same tale as told by Shakespeare in ‘King Lear’ with three daughters vying for the favour of their ailing father.
In Taneja’s book, the family are immensely wealthy, but are riddled with contradictions and neuroses that undoubtedly afflict many with money in contemporary India.

Taneja’s vivid imagination and powerful, enveloping prose, that has a scintillating rhythm and pace to it, always looked capable of being adapted visually.

Dattani, a one-time London based lawyer and ex head of business and legal affairs at Fox in India, told Variety’s London-based correspondent Naman Ramachandran: “Preti Taneja’s ‘King Lear’ story works remarkably well with a critical look at the balance of power in contemporary India through three female protagonists in charge of a powerful dynasty in a patriarchal society. It was picked up by online Indian magazine Scroll India.

FINALLY, we will be carrying an interview with Reema Kagti, the writer and director behind the Amazon Prime series, ‘Made in Heaven’ shortly… stay tuned with acv!

*On some mobile devices, Instagram posts do not appear in correct dimensions

Privacy & Cookies: This site uses cookies. By continuing to use this website, you agree to their use.
To find out more, including how to control cookies, see here: Cookie Policy
← ‘The Brawler’ #LFF film review: Expect some mental bruising after watching Anurag Kashyap’s hard-hitting drama about corruption in sports
‘The Song Of Scorpions’ (#LFF review) Anup Singh in fine form with another original offering →