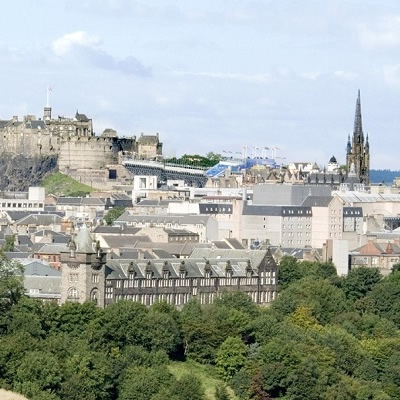 High number of Asian comedians and other acts head for city

ONE OF THE world’s largest arts festivals has just got under way in Edinburgh and there’s plenty for you and www.asianculturevulture.com to get excited about – from comedy to serious dance and theatre.

For the moment, we’re just looking at the fringe events and perhaps most strikingly, it’s the number of Asian comedians who are hitting the city that really stands out (from the almost 400-page long fringe programme).

There’s a whole phalanx of them, a new generation of rebellion and ambition…whatever did their parents do? Yeah, one’s even a doctor and that’s not Paul Sinha.

Seriously (kinda), perhaps the pick of the emerging bunch in Edinburgh will be Humza Arshad (pictured), aka ‘Diary of a Badman’ (nothing to do with Gulshan Grover there), whose skits on youtube have made him such a global hit and a phenomena (btw, bruv, that’s not a disease), among the young.

With millions of followers (literally), he seems to be venturing tentatively back to the stage after a flirtation in 2011 and an earlier London show this year. TV execs, please diarise. He will be presenting ‘Diary of a Badman’ to some scary Scots, probably, for the first time. Don’t make ‘Jock’ jokes, but we’re sure Humza can cope with a few hecklers. He gets underway on Sunday, August 11 at a venue called the Gilded Balloon Teviot. There has to be a joke in that…

Of the bigger (not in size, just in case anyone’s a little sensitive out there), more established entertainers is native Scot Hardeep Singh Kohli, who presents an enigmatically titled show, ‘Hardeep is your love’. Mmmm, that’s probably not a question for the morning, but the raconteur and bon viveur (we all have degrees here) has only five nights to convince you. He’s a festival favourite, so don’t hang around if you want to see him.

The only women among the number (as far as we can see and that’s not a joke) is Ishi Khan-Jackson. She presents her show, I am Happy! You’re in Scotland, are you sure? Yes, we’re joking. Obviously. She’s on from Friday, August 16 and for just two nights, with ‘The secrets to happiness’. We think that’s living in a non-Tory country. That may be a joke, better appreciated north of the border.

Among the better known are Romesh Raganathan, whose show is ‘Rom Com’. Don’t go expecting sweetness and light from the comedian who specialises in droll delivery, often with a comic sting.

Also there is Nish Kumar, the man made famous by a picture of his bearded self which went viral ‘as a confused Muslim’ – he isn’t Muslim or confused…we think. He delivers ‘Nish Kumar is a comedian’. Go and you will find out just why…

The recently graduated Ahir Shah’s directs ‘Pick Me Up’, a comedy sketch show, and appears solo, while several others appear as a double act or in a group.

Among this number are ‘Bollywood Rejects’,  Sid Singh and Erin Melville.  Sid is from the sunshine state in the US, while Erin hails from the land down under. This US-Australian duo confess they didn’t make it into the world’s biggest film industry…and with first names like that…no Khan is going to shake.

Elsewhere, Sunil Patel appears alongside Josh Ross at the Laughing Horse Free Festival. Both have won comedy awards and are tipped for bigger things.

Here’s another name and double act to look out for – if only for the name – Lovedev Barpaga  – joins Jon Wagstaffe to present ‘Wagapaga’, their debut Edinburgh show.

Manraj Bahra joins Fern Brady, Glenn Moore and Tom Taylor for ‘One of Us Might Be Famous’. On each night three of them will be on stage and looking to get themselves a spot on the Michael McIntrye’s Comedy Roadshow or so they say.

Suman Biswas is our other comedy doctor in the house. That doesn’t sound right? Anyway, Dr Biswas as he is known professionally, is in town, treating people to his ‘Free after Amateur Transplants’.  He’s quite liable to break out into a ditty or two and make fun of celebrities.

Impressionist and stand-up funny man Anil Desai returns to Edinburgh with ‘Another Night at the Movies’.

Also worth looking out for is ‘The Equal Opportunities Act 2010 Presents…Free’, which fulfils the diversity criteria with one of a trio of performers an Asian woman by the look of things, but is she the one who tells ‘dirty, filthy knob jokes from Essex’? We do hope so. Essex would be proud.

Most of the shows began this week (August 5) and continue until the end of the festival on August 26 (with many wrapping the day before).

However, beware, the bigger names appear later and only on for a limited period. So check times and other details at the fringe website.

Those of you lucky enough to indulge your comedy bone in Edinburgh – report back on what tickled you most or not. We all want to know…

Edinburgh is often seen as an important showcase for new work and new writers and there are several productions that catch the eye.

Fresh from sell-out performances in India is ‘Ali J’ – a man on death row, whose commitment to his faith is less than fanatical, but he finds himself, hung, drawn and quartered in the minds of those around him. A play about identity, faith and what it means to be a Muslim in India today. It’s on until August 25.

Among the intriguing but less obviously attention-grabbing productions is, ‘Nehru: His Inner Story’, which opens on Wednesday, August 7.  India’s first democratic leader was cultured, urbane and witty and cast a spell over many, including Edwina Mountbatten, the wife of the last Viceroy of India. Passion and history at the crossroads – it’s an interesting subject, but there are no other details on this production from India.

Already much in the limelight is ‘Nirbhaya’ – the play about the tragic events of December 2012 in Delhi, when a young physiotherapy student entered a private bus with her male friend and proceeded to be beaten, raped and left for dead. International playwright Yael Farber brings an Indian cast to Edinburgh. Shot through with translated personal testimony and set in a tight, claustrophobic stage, made to resemble the interior of a bus, the play takes the tragic death of 23-year-old ‘Nirbhaya’ (fearless one) as a starting point for the violence perpetrated against women in India. Not for the fainthearted, but crucial in communicating how far the world, and not just India, is in giving women equal rights.

Rather different in style, but perhaps no less radical in its message is ‘Pole Factor’. Written by Nazish Khan, this play explores what happens when the beautiful Sameera takes on extremists to win ‘Pole Factor’, but is it a victory for her life played out in front of the camera? Produced by Angry Bairds Productions, it features a mixed race cast who could be stars of the future. It runs on six days from Monday, August 12.

From South Africa comes a play, titled ‘Cherry on Top’, about two women from the Indian community there battling for the affections of one man. One is his wife, the other, his mistress and now he is dead. Just who is the cherry on the top?

WITH not a Bollywood track in earshot, ‘Bangalore Rock’ hits the fringe festival. Played by the group Thermal and A Quarter, it’s a mix of music an storytelling and billed  ‘as a Yes meets The Beatles via The Police while out for curry vibe’. They’ve opened for Guns ‘n’ Roses and have played around the world. They’re in residence for the duration of the festival until August 26.

Also in town are Digi-Bhang Live, described as a showcase for Bhangra with ‘contemporary electronic elements’.  Made up of both Scottish and Asian musicians, it’s an eclectic fusion of sounds and precedes a DJ set. It plays just the one night on August 16.

From Australia comes ‘Beyond West’ where singer Susanna Orr Holland, who grew up there, performs original songs, ballads and ragas, mixing the sounds and sensibilities of the East with the West and producing a very original Celtic, Eastern mystic sound.  It’s free and on till August 25.

Moving into musicals, there is an ambitious production, ‘Between The Empires’, which opens on Sunday, August 11, and runs for two weeks. Set in the early days of the Raj, it charts the almost impossible romance between an East Indian company army officer and Mughal princess. Scored with many Indian instruments and performed live, it should be a spectacle and a jolt to the ears and is produced by Orange Tree Productions.

There’s quite an eclectic line up, with a mixture of the traditional, contemporary and fusions all vying for your attention.

Perhaps one of the highlights for all dance enthusiasts will be Aakash Odedra performing ‘Rising’. Mentored by the much celebrated Akram Khan, Odedra reprises solo work composed by Khan as well as Russell Maliphant and Sidi Larbi Cherkaoui. It’s one man on a stage, letting his body do all the communicating and there are elements of contemporary Kathak.

It runs for eight nights from Sunday, August 18.

Of the others there is ‘Blue Lotus Summer’, an outdoor performance by Dance Ihayami. This well-established Scottish company is innovative and different, ‘combining contemporary and classical India dance,  and classical music, composed by Ash Madni and features elements of audience participation.  It takes place at Royal Botanic Garden in the city and for two days from August 16.

‘India Flamenco’ is already under way and drawing the crowds – it mixes Spanish Andalucian flamenco  with Odissi classical dance, a form of movement that goes back centuries in India.

It’s returning to the city after shows last year and was commended for it passion and grace with some of the audience even moved to tears. Take your handkerchief and book early, this show closes on Tuesday, August 13.

If classical dance is more to your taste, you shouldn’t be disappointed by Ashwini Ramaswamy, who presents a solo bharatanatyam performance accompanied by live music. It’s free and on August 24 at St John’s in Princes Street.

Finally, if all this running around from one production to another gets the better of you, it might be time to take a breather and head for some Buddhist meditation at the Edinburgh Meditation Centre, where monks from the Triratna Buddhist community will help you to enjoy greater calm, confidence, compassion and contentment. It’s available till the end of the festival.

Check all times and venues with the Edinburgh Fringe Festival.