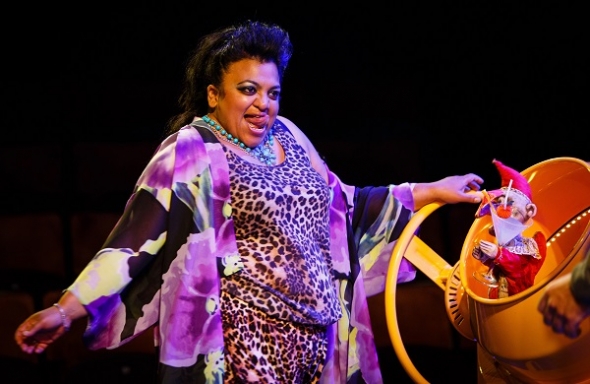 Adapted from several more famous works, this is an entertaining and playful production about to go on tour…

THIS PLAY, ‘Dead Dog in a Suitcase (and other love songs)’, is a very successful show by Kneehigh Theatre Company, based in Cornwall that has been producing “vigorous, popular and challenging theatre” which they “perform with joyful anarchy”.

‘Dead Dog in a Suitcase (and other love songs)’ is a radical re-working of ‘The Beggar’s Opera’, a satire written by John Gay in 1728 and was later adapted by Bertolt Brecht into ‘The Three Penny Opera’ – a critique of greed, capitalism and amorality.

Originally produced in 2014 with Liverpool Everyman, it is a show that continues to “give and give”.

It’s a madcap crazy show using smoke, haze, live music, a dead dog in a suitcase (not real obviously), and general mayhem; however, it has a serious undertone discussing corruption, rampant capitalism and chemicals.

There is a cast of 14 actors – and a few puppets who dance, sing, and generally behave badly in this show.

There is a plot – a good man who was about to expose corruption – ‘Mayor Goodman’ (Alex Lupo), has been murdered along with his dog, ‘Toby’ (because he was a witness), by ‘Macheath’ (Dominic Marsh) on the order of ‘Les Peachum’ (Martin Hyder) and his wicked wife, ‘Mrs Peachum’ (played by Rina Fatania), whose stage work, acv has enjoyed over the years.

Another fine performer is Georgia Frost as ‘Filch’, a much put upon side-kick to the arch villain, Macheath.

Meanwhile the policeman, ‘Colin Lockit’ (Giles King) and ‘Widow Goodman’ (Lucy Rivers) wants to get to the bottom of the whodunit (These are not spoilers!).

Peachums are fond of their banana daiquiris and are unaware their daughter, ‘Polly Peachum’ (Angela Hardie) has fallen in love with the bad guy, Macheth – as is wont to happen.

There is great live singing from the band, with music composed by Charles Hazlewood and some actors play the instruments and perform in a variety of styles including, ballads, jazz, and ska.

There is a brilliant grotesque scene in the bar when Macheath is planning to elope with Polly, but at the same time he has also impregnated the policeman’s daughter, ‘Lucy Lockit’ (Beverly Rudd), not to mention a few other baby mothers.

Peachums who have made their fortune in pilchards are cooking the books and Polly is a whizz accountant, and suitcases get mixed up and the final gallows scene is a bit much… I felt the show was a bit too long with some slapstick and dark humour, but audiences love the style of Kneehigh so do check it out. ACV rating: *** (out of five)

Show is at Lyric Hammersmith until Saturday (June 15) and then has a long tour both around the UK and internationally, including Exeter, Cheltenham, Bristol, Galway (Ireland), Shanghai (China).

Lead picture: Rina Fatania as Mrs Peachum in ‘Dead Dog in a Suitcase (and other love songs)’