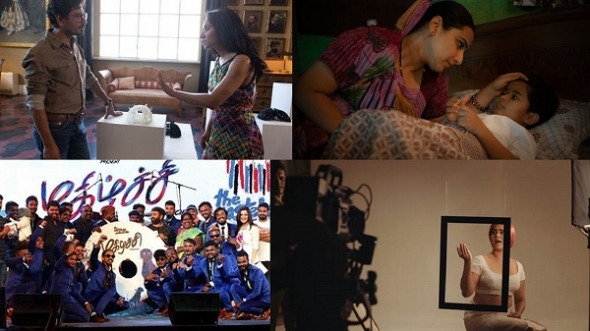 With restrictions on cinema openings lifted in the UK, the Bagri Foundation London Indian Film Festival (Liff) hosted a mini festival between September 17-20 and acv saw these films…

IT WAS GREAT to be back in the cinema and enjoying all these films on the big screen with shows at the BFI (British Film Institute) Southbank and Cine Lumiere (Kensington) – and well done to all for making it happen and being an enjoyable and comfortable experience at this time.

The Indian singer and music composer, Sona Mohapatra (pictured above), is the subject of this documentary, ‘Shut Up Sona’.
It’s the debut film for director, Deepti Gupta, better known as a cinematographer, and alumnus of the Film and Television Institute of India (in Pune) – and part of the Indian Women Cinematographers Collective.
This bright, talented and outspoken woman is a gift of a subject for the filmmaker, as Mohapatra openly discusses sexism, inequality in the music industry and generally speaks her mind on a range of subjects, while being trolled and threatened in equal measure. She also has a hearty laugh.
‘Shut up Sona’ is loosely observational in structure – in that you see Mohapatra at music events, criticising how the press want to interview her and review her work before staying for the concert itself!
Mohapatra points to the inequalities in the music industry, citing how big music promoters and live event companies never headline women artists.
She talks about her love for the legendary sixteenth century Bhakti poet and Krishna devotee Mirabai (pointing to the obvious sexism inherent in the worship of Lord Krishna) and visiting the dargah (mausoleum shrine) of the Sufi mystic, Nizamuddin Auliya, sitting and singing with the male singers and asking them why women cannot perform with them or enter the shrine.
We see her in her private space with her husband the music composer, Ram Sampath, on how to deal with the Madariya Sufi Foundation which has called her out for wearing revealing clothes while singing the Sufi Kalam ‘Tore Surat ke Balhari’ (a very famous spiritual tribute by the disciple, Amir Khursau for his master, Nizamuddin Auliya and is loosely translated as, “I am overwhelmed by your face”).
The film assumes knowledge of the artist and that is frustrating as sometimes stories begin and are never followed through, such as her comments about Bollywood actor, Salman Khan or her #MeToo accusations are not discussed.
It also presumes audiences the world over will know her music and so whenever there is a beautiful shot of her on stage about to begin performing it cuts too abruptly.
You wonder why this is so, because Mohapatra’s own company, Omgrown Music, is also a producer of this documentary.
This is such a shame as she does have an amazing voice that has the ability to shift from classical to pop with consummate ease.
And, as I discovered later, she is the voice behind the song, ‘Bekhauf azad hai jeena mujhe’ ( ‘I want to live fearlessly’) which is composed by her husband, Sampath, with lyrics by Svati Chakravarty and was the opening song of series 2, episode 1 (‘Fighting Rape’) of the Aamir Khan produced TV debate series, ‘Satyamev Jayate’ (‘Truth Alone Truimphs’) – and the track has become an anthem for women survivors worldwide.
In a couple of scenes Mohapatra talks to Gupta, who also never replies. I liked the fact that the story is told through the voice of the artist, who is taking charge of her narrative.
ACV rating: **** (out of five)

You can see Sona Mohapatra talking about the film and her career to date with acv editor, Sailesh Ram here – ‘‘It’s a love letter to my country’’ https://youtu.be/X5CAThYhR9Y

‘Roam Rome Mein’ is actor, Tannishtha Chatterjee’s debut as a writer-director and is about a woman escaping an oppressive patriarchal family.
Reena (played by Chatterjee herself, above right) disappears while on holiday in Rome and then her brother, Raj (played by Nawazuddin Siddiqui, left) is your archetypal male-chauvinist who goes looking for her and in the process learns something about himself.
The title can be interpreted as a cross linguistic pun which means ‘Every Inch of my Being’ in Hindi, but can also be seen as wondering around Rome, which is what Raj does while trying to look for his sister.
The scenes of the city shot by Sunita Radia are wonderful to look at, but this psychological drama with its comparisons to Renaissance art and 17th century painter, Artemisia Gentileschi – later considered a feminist – comes across as a bit pretentious.
There is a strange scene when Raj is invited to dinner by an aristocratic Italian couple (Urbano Barberini and Pamela Villoresi). In a way this is a film about Raj learning to be less of a chauvinistic male than it is about Reena.
Acv rating: ***

Tannishtha Chatterjee talked to acv at the Cannes Film Festival in 2019 about the making of the film just as she was completing it. https://youtu.be/tPJuXT0U7e4

*There was also a short film accompanying this at the Liff screening, called ‘Natkhat’ (‘The Brat’) directed by Shaan Vyas. It features Bollywood star Vidya Balan(pictured left here) as a mother in a rural setting, trying to educate her son – an eight year old child about gender equality.
The film is a bit on the nose (very blunt) but there are some difficult scenes of young school kids aping older male adults in their attitudes towards women (there is a suggestion of molestation) but the mother’s fairy story to the child about the king banishing the birds, really gets the point across in so much as everything has its place and you upset the ecological balance of the world at your peril.

This is a 70-minute anthropological observational documentary by Maja Meiners on the Casteless Collective, a band created by Pa Ranjith, a Tamil filmmaker and director, in December 2017, to challenge marginalisation and caste discrimination.
The Collective, based in Chennai is comprised of an ensemble of folk musicians, rappers and a female vocalist and none of the team have been in a band before.
The guys look dapper in their stylish jackets and drainpipe trousers, when they perform in public and the group has a following in the community.
Music can get into your soul in a way that speech cannot, explains Ranjith.
The Group take part in the Vanaam Arts festival (December 2018) organised by Ranjith through his community centre, Neelam Cultural Centre and are a hit with the crowd.
Meiners interviews the rapper, Arivu, music producer, Tenma, and activist and Carnatic music composer, TM Krishna, and professor, Dr Gajendran Ayyathurai, from the University of Göttingen (where she studies), and they explain caste structures, and discuss the insidiousness of caste and the overall message is that the company will continue to fight to annihilate caste discrimination.
You can see this film is a labour of love for the filmmaker as she writes, directs, and edits this documentary, which continues to play the festival circuit.
ACV rating: ***

The film is currently screening as part of IndoGerman Filmweek (September 24-30) and Meiners was in conversation recently. Other film personalities and stars talk also https://www.indogerman-filmweek.de

Privacy & Cookies: This site uses cookies. By continuing to use this website, you agree to their use.
To find out more, including how to control cookies, see here: Cookie Policy
← Jallianwala Bagh – Across family divides: ZEEJLF at the British Library 2019 and sharing other stories…
ZEEJLF at British Library 2019 – Cricket, Queen Victoria, outsiders and Islamic modernism do battle for hearts and minds – who wins? (Day 2 round-up) →