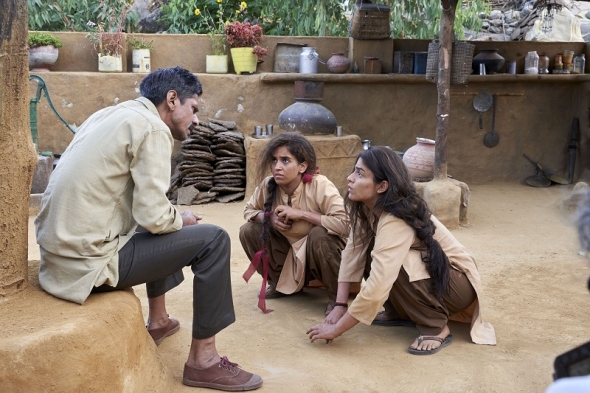 Two developing bright lights of Indian cinema discuss on-screen sibling rivalry, working with one of India’s most individual directors and making it as outsiders…

FOR A SPECIAL band of directors, you can make allowances you might not with those you neither know or nor much admire.

Take Vishal Bhardwaj – he constantly and perhaps very consciously tries to do something different.

Ever since his tremendous Shakespeare trilogy: ‘Maqbool’ (2003) from ‘Macbeth’; ‘Omkara’ (2006), adapted from ‘Othello’ ; and the controversial but very dynamic, ‘Haider’ (2014), transferring Shakespeare’s epic ‘Hamlet’ to Srinagar and the turbulence of 1990s Kashmir, he has tried to inject something different and challenging to the usual Bollywood masala repertoire, while not wholly dispensing with its sensibilities and preoccupations (- very loosely: music, dance, romance, and power struggles.)

He did all this again with ‘Rangoon’ (2017) an achingly stylish period piece set in Second World War colonial Burma, with convincing turns from Bollywood icon Kangana Ranaut and star Saif Ali Khan – but it failed to ignite at the box office in India.

He is back now with a film called ‘Pataakha’ (‘Firecracker’), which has just opened and is about two warring village-based sisters.

Bhardwaj optioned the film after coming across a short story by Charan Singh Pathik and the writer worked on the film during the pre-production. It is Bhardwaj’s own screenplay.

Forget that love and special bond of intimacy between siblings – this is conflict, confrontation and an earthy realism often to be found in Bhardwaj’s work.

He has hung the film around two emerging actors as the fight-friendly sisters – taking risks again that others might not.

Radhika Madan is a well-known TV actress in India, now breaking into films.

ACV saw Madan for the first time in in ‘The Man Who feels no pain’, a delightful comic tale, which is inspired in part by the Kung Fu genre movies popularised by Bruce Lee and Jackie Chan – but produces a wholly Indian movie that will may well develop a cult global audience.

It had its world premiere at the Toronto International Film Festival, where it won an award and is directed by Vasan Bala, who burst onto the film scene in 2012 with the film, ‘Peddlers’, which premiered at the Cannes Film Festival.

Madan plays the female lead in Bala’s film and is great value and has a bright future ahead of her.

Sanya Malhotra is already perhaps better established in the film world in India, simply because she has featured in one of the biggest Indian hit movies in recent times, starring alongside the A-lister Aamir Khan, in ‘Dangal’ (2016).

Over a rather crackly phone line to Mumbai, they told www.asianculturevulture.com about the challenges of working on ‘Pataakha’.

“I have an older brother,” she revealed.

ACV: You were the respectful younger sister?

“I used to practise all the WWE (World Wrestling Entertainment) moves on him and fight all the time. I would throw shoes at him, punch him, it was like every sibling relationship.”

Malhotra: “I have an older sister and growing up I absolutely hated her. We used to fight for no reason. Now, we don’t fight much.”

“When I first met her, I thought she was perfect for this role and I didn’t think we could be friends – she talks a lot and I don’t talk that much.

Working with Bhardwaj, one of Indian cinema’s most individual talents was a thrill for both.

Madan: “When I read the script, what really motivated me was the way Champa ‘Badki’ Kumari life was written.

“That really intrigued me and I really, really, wanted to play her life. And I did things in my life like I’ve never done before, like smoking…”

ACV: You’ve never been a rebellious sort, then?

Madan: “I have been a rebel, when I was young but what was challenging was her (Champa’s) body language and the dialect I had to learn.”
Both spent time in a village in Rajasthan, doing what their characters would do – getting up at 4am, fetching water, milking cows, tending to buffaloes, preparing the dung cakes (used to help burning stoves), cooking breakfast for the family, and cleaning and talking with villagers.

Malhotra expanded: “Working with Vishalji was the attraction, he really helped.

“The character is not someone I could relate to – she is very aggressive and I am not that kind of person.

“There were a lot of workshops and there was a lot of improvisation, Vishalji really helped us to know our characters really well.”

Both Madan and Malhotra are from Delhi and have had to break into the film world as essentially outsiders.

Malhotra admitted it was tough.

“I did a lot of ads in my first year and Dangal was my first audition for a film. It’s not easy – you can make it as an outsider, but you need a lot of patience.”

‘Pataakha’ is out in cinemas now…

‘Haider’ – brave, artful but not for the squeamish

Privacy & Cookies: This site uses cookies. By continuing to use this website, you agree to their use.
To find out more, including how to control cookies, see here: Cookie Policy
← Venice 2021 (video): Bengali star actor Sreelekha Mitra – “Sometimes a woman can manipulate a man and if she wants it to be physical, it’s her choice”
London Film Festival 2021 (early preview) – look out for Riz Ahmed, Adeel Akhtar and Asif Kapadia and two Indian films and comedy, ‘7 days’… →