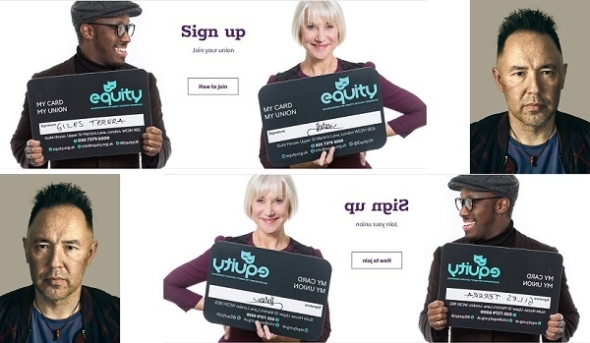 DANIEL YORK LOH – the chair of the actors’ union race equality committee – fears for the future of his non-white colleagues following the fall-out over an Equity apology issued to actor Laurence Fox.

He also worries about ongoing and future Diversity issues within the entertainment industry – as the union which has over 47,000 members no longer has any broad, formal representative group to support, lead and provide insight on such issues.

On Friday (March 13), the union published a statement apologising for criticising Fox following his comments on a BBC ‘Question Time’ (‘QT‘) programme in January.

The nine-member minority ethnic member committee resigned on mass when it learnt about the apology and York Loh’s decision to resign from the committee.

He told www.asianculturevulture.com he had little time to respond to Equity, urged them to discuss the issue and consult others, but the apology was issued in the morning after his protestations.

York Loh told acv from Singapore on Saturday (March 14): “I don’t know how Equity have got into apologising for tweets they never sent.

“I think this has just become a bun fight now between privileged white people with money.

“I don’t think anyone really cares about what we think – it was presented to us a fait accompli and while there are people at Equity with good intentions, I think we are just there for box ticking and to appear in photographs, as cuddly, and dare I say it, colourful.

“It’s a tragedy. I think the union are quite worried about how this all looks.”

He said there is some talk now of perhaps creating a separate actors union to represent non-white actors’ interests.

This view was also raised by Irvine Iqbal who also resigned from the committee and told www.asianculturevulture.com: “I really don’t know about the future – people are talking about it (leaving Equity and setting up a new organisation). It’s got to be a question.”

An Equity spokesperson issued a statement after being contacted by acv for this story.

“We are deeply saddened by the resignation of the members of Equity’s Race Equality Committee (formerly the Minority Ethnic Members Committee).

“We will continue to engage with members of the committee regarding its current programme of work and how this is taken forward. This work, which includes using research on black and minority ethnic portrayal in mainstream TV to make genuine change in the broadcast industry, must continue.

“The union will also continue its broader work in addressing issues of racism and discrimination. This has always been and remains a key priority for the union.”

York Loh said he had been trolled over the weekend on social media – probably by Fox fans, he thought. The actor has become something of a totemic figure for some right-wing individuals and groups which claim racism in Britain is exaggerated.

York Loh said a brief exchange with Fox himself in the wake of the apology on Twitter had been quickly deleted.

Equity’s apology itself has drawn flak on social media with many members expressing disgust and disappointment at their union’s position. (See comments below this Tweet).

Many have also wondered why the argument has reopened now.

Industry title, The Stage, reported that an out of court settlement had been reached with Fox, citing sources close to the actor. Equity later clarified, in response to another media inquiry, that a payment had not been made to the actor.

The unnamed source in The Stage was quoted as saying that Fox was pleased with the way Equity had handled the issue, after “what has been a very difficult period for him and his family”.

The row first erupted following tweets criticising Fox’s comments about racism towards Meghan Markle on ‘QT‘ when he appeared on the programme in January. Fox said he felt the Markle issue was being overblown and wasn’t racist.

“It’s so easy to just throw your charge of racism at everybody and it’s really starting to get boring,” he said on ‘QT’.

The audience member who asked the question then challenged Fox and said he was responding as a white person of privilege.

The Equity tweets denouncing Fox as a “disgrace” and “playing to the gallery” and saying he “occupied a highly advantaged position” were deleted in January quickly after being posted. The union said the Tweets had “inadvertently broken” union rules and said it was a “mistake” to call out an individual member of the profession.

York Loh has campaigned on issues of equality for more than 10 years and is much respected by members of the race equality committee for his dedication and many believe he is doing a good job in a difficult environment.

He has been instrumental in seeking better representation for all minority ethnic actors and British actors of East Asian descent.

He and the committee helped to set up a monitoring programme seeing what type of work actors of different backgrounds are doing on TV. He found that most East Asian actors on TV were playing foreigners.

York Loh has also brought attention to a production of ‘The Depths of Dead Love’ based on a Chinese fable and had Chinese character names played exclusively by a white cast in 2017 at the Notting Hill Print Room.