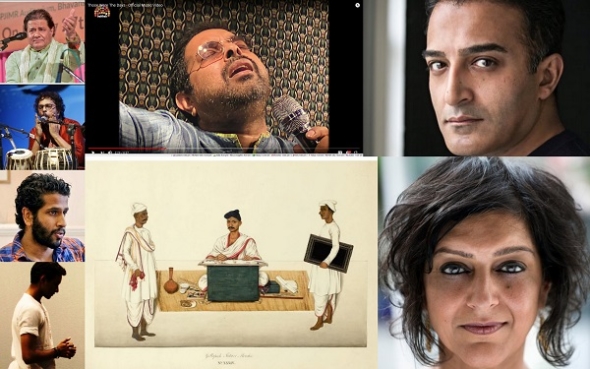 Don’t get bored, asianculturevultures! (on mobiles this page may appear incorrectly aligned, please revert to a wider screen – thanks!*)

Muslims in Britain will be celebrating Eid al Fitr this weekend and to recognise this important festival the BBC is broadcasting an ‘Eid Special’ for Sunday (May 24).
Broadcaster Adil Ray (pictured) and chef Matt Tebbutt will present an hour-long special live edition of the BBC’s popular ‘Saturday Kitchen’ from 10.45am.
Broadcaster and chefs Asma Khan and Salima Mahmood Ahmed will be serving up some Eid delights and there are interviews with Olympic icon Sir Mo Farah, and comedian Nabil Abdul Rashid.
There will also be archive footage of cooks Rick Stein and Nigel Slater making Eid delicacies from their numerous culinary travels.
You will find the programme here (https://www.bbc.co.uk/programmes/b006v5y2/episodes/player) shortly after it is broadcast at 10.45am live on Sunday, May 24.

FORMER medic turned actor-director-writer Prasanna Puwanarajah (pictured right) and Meera Syal (pictured left) are among the stars who have contributed to ‘Unprecedented’ – a series of new plays, made and conceived during the UK’s current lockdown conditions.
Created by Headlong and Century Films in partnership with BBC 4, these stories involving some 50 top name actors, will be broadcast on the BBC from Tuesday (May 26). Eleven of the new productions will be broadcast on BBC Four across three nights with all 14 available to stream on BBC i-player as part of the BBC Art’s Culture in Quarantine initiative. The projects have all been made as lockdown conditions persisted – rehearsals took place over Zoom, props, costumes, lighting and set were sourced or made by the cast themselves and the pieces were shot in homes using digital conferencing technology.
‘Fear Fatigue’ has been written by Puwanarajah and stars Esh Alladi and Natalie Dew and is based on conversations with NHS workers in March 2020. This drops on Thursday.
Syal appears in ‘House Party’ – where neighbours in South London get together to have a house party digitally, but the mood isn’t what it should be. This is written by April De Angelis. You will be able to see ‘House Party’ on Wednesday (May 27).
Gemma Arterton, Alison Steadman and Rory Kinnear are among the other actors appearing the ‘Unprecedented’ line-up.
For the productions, see here: https://www.bbc.co.uk/arts About the initiative here – http://fairypoweredproductions.com/headlong-and-century-films-present-unprecedented/

Missed the Wallace Collection’s ‘Forgotten Masters: Indian Painting for the East India Company’ – then do not despair.
You can view the exhibition from the comfort of your home (or device wherever) with a video and look through the exhibition in the expert company of the curator William Dalrymple and director of the Wallace Collection, Dr Xavier Bray. The exhibition which closed ahead of its scheduled end date in April looks at a mostly forgotten and unexplored area of Indian painting. Nearly all the artists from the 18th and 19th century are Indian and were in the pay of their colonial masters. Their work is surprisingly subversive but subtly so. As the exhibition was to enter its final week, the museum was set to host its popular, Wallace Lates, curated by ACV contributing editor Momtaz Begum Hossain. A mix of activities from music, to discussion to live art, had been planned for the museum – which is just off Oxford Street in the heart of London – extending its opening hours for the occasion on March 27.
You can watch ‘The Forgotten Masters’ here – https://www.wallacecollection.org/wallace-from-home/#exhibitions-online
and more about the museum and its collections here – https://www.wallacecollection.org/

Well-known Bollywood screenwriter and lyricist Javed Akhtar has adapted an original Tagore song from Bengali into Hindi – the song itself is Tagore’s Bengali take on the Scottish Robert Burns’, ‘Auld Lang Syne’ song.
Popular Bollywood singer Shankar Mahadevan (pictured) and Datta herself are part of the vocal group who all have solo sections. Figures from the film word providing spoken word for the video are Sharmila Tagore, Aparna Sen and Shabana Azmi. The other vocalists are Kaushiki Chakraborty, Pramita Mallick, Parambrata Chatterjee, Rupam Islam, Sourendro-Soumyojit Patricia Rozario, and Sasha Ghoshal. The music has been arranged by Soumik Datta and the background visuals are from award-winning filmmaker Souvid Datta’s archive. Bollywood star Vidya Balan can be seen giving a public health message at the start of the eight-minute plus music video on Youtube – see link below.
Created as a response to current lockdown situations in both India and the UK and inspired by the power of music to bring people together, the organisation is helping to supporting the work of two charities, Kolkata Gives and Mijwan Welfare Society – which are both currently distributing a million masks in and around the Kolkata and West Bengal region.
Sangetta Datta, Baithak UK artistic director and founder, speaking before the Super Cyclone Amphan hit India and Bangladesh yesterday (May 20), said: “‘Those were the days’ celebrates the power of music and memory – that transcends physical isolation.”
You can watch the video here – https://youtu.be/FvB-utqpUpo

POPULAR singer Anup Jalota (pictured) is among those who can be seen in a series of live concerts lined up by Kalakar arts, a UK arts group founded by fellow singer and performer, Chandra Chakraborty.
Last month she started the concerts to mark Guru Shishy (Shishya) Parampara – which is a tradition of recognising teachers and gurus. Her tutor was the legend AT Kanan and she had originally organised a concert in London in his memory for June 18 – the date of her guru’s birthday. “It wasn’t possible and so I thought I would ask these singers whether they would peform for these Facebook Live Concerts, they responded out of respect for my Guru. There has been an amazing response.” She set up Kalakar a year ago to promote work which recognised the pioneers of mainly Indian classical and semi-classical music in this century and the last.
Coming up this Saturday (May 24) is semi-classical Bengali singer Subhamita. The Super Cyclone has hit the region hard and there may be some changes to the current Kalakar Arts programme as a consequence. STOP PRESS (22.05.20): The Subhamita concert has been postponed. Please check with the Facebook page. Pls see https://www.facebook.com/artskalakar/

Indian Channel Zee 5 is rolling out a ‘Supermoon Live to Home’ festival for the very first time.
Launched to make up for the lack of live programmes available on Zee platforms globally, the channel will broadcast every weekend, for the next 12, starting from Saturday (May 23); it will be a mix of entertainment built around music and comedy.
Among the artists appearing this weekend are renowned tabla player Bickram Ghosh (pictured), stand-up comedian Varun Thakur, singers, Palash Sen, Mame Khan and rock band Parikrama.
Zee 5 is a subscription channel in the UK and these shows will broadcast in the UK on Zee TV a week later (May 30). See https://www.zee5.com/

Looking for something online with more of a cultural angle than the usual fare to entertain children online – look no further than Tara Arts for its ‘Tara Tales’.
These are stories originally found in ‘The Panchatantra‘ (Indian fables) and now brought to vivid life by Tara actors.
‘The Monkey King and the Mangoes’ is the first tale the group has dropped – you can watch it here
https://youtu.be/70XDGQ3_hhA

Finally, there is still time to time to make contact with a qualified therapist if, as a creative, you’re finding life tough right now. Launched by the UK Asian Film Festival and its director and founder, Dr Pushpinder Chowdhry, a qualified pyschotherapist herself, the service offers support and help to artists who may be dealing with such issues as bereavement, depression, anxiety, stress, isolation, loneliness and/or relationship and domestic abuse issues, you can call 07930 491915 and leave a confidential message and listen to further instructions. The service will cease on Sunday (May 24) and is part of Mental Health Awareness Week.

If you want to send us listings – please send to editor@asianculturevulture.com and mark listings in the subject line by Tuesday (May 26) 4pm for online offerings beginning from Thursday (May 28) and at least available for seven days. Thanks! 🙏🏾

*Apologies a technical glitch, we will try to correct…. thanks