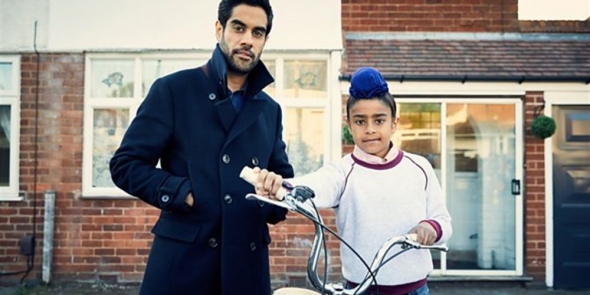 IT’S BEEN A GOOD YEAR for the South Asian diaspora on television. Over the last few months, on the BBC in particular, we’ve been treated to a host of ‘partition’ (Partition Season) inspired commissions that have allowed many viewers to take stock of history, opening up discussions with their family about their own experiences and ancestry. Thankfully such programming hasn’t ended yet.

This winter BBC2 will broadcast an adaptation of the memoir of Journalist Sathnam Sanghera; ‘The Boy With The Topknot’, which was published in 2009.

Seven years in the making and the passion project of Producer Nisha Parti; the result is an astonishingly honest, open and refreshing drama that leaves an impact on all who watch it.

Our protagonist Sathnam (Sacha Dhawan) is a successful Oxbridge educated London journalist who writes for national newspapers and is preparing to buy a property and marry his girlfriend Laura (Joanna Vanderham).

These latter plans however have yet to be revealed to his family who reside back in his hometown of Wolverhampton. The story picks up from this point, but as he gears up to make his big announcement, he uncovers a family secret that changes his life forever.

Family and mental health are key themes in the story and while the immediate reaction may be that it’s great to see the topic of Asians and mental health being discussed; the truth is it’s a universal theme that viewers, whatever their ethnicity, can relate to.

Much of the appeal of the film lies in its honesty. (It’s a film in its own right, far more than a TV drama). There are deeply personal admissions that few people would ever admit to themselves, let alone in a public space.

It’s incredibly easy to live your life in denial, never confronting the issues that are actually at the heart of your being, yet here Sathnam lays bare the vulnerability of being that person, facing up to his personal challenges and it’s rare to see such transparency on television, fictionalised or real.

The tenderest moments of the film are the solitary ones between Sathnam and his father. Many of us can relate to those times when you’re simply at home, sitting next to a parent when nothing needs to be said. It’s particularly poignant when his father (Anupam Kher) shows him a scrapbook he keeps of Sathnam’s columns which he has cut out and stuck in. It’s almost weep-worthy.

Anupam is relaxed in the role of the father, one that requires incredible discipline to play, as much of the time he is in his own trance. The heroine of the film by far is Sathnam’s mother (Deepti Naval). Her strength is so admirable. The present day setting of the film frequently flashes back to not only Sathnam’s childhood, but also to the early days of his parents marriage, giving us a revealing insight into the experiences of being a newly wed in an arranged marriage, and having to adjust to unexpected circumstances.

Sathnam’s siblings add charm to the story as it’s comforting to see the familiarity of bustling family gatherings. These scenes juxtaposed against his London life show just how different the two aspects of his private and professional life are. This dual identity can be hard to understand for those who don’t experience it, so it’s refreshing to see it explained in such an honest way.

Though it is an adaptation of the memoir of the same name, this film stands alone on its own merits. There’s no need to approach viewing it with fear if you are a fan of the book. It’s testimony to screenwriter Mick Ford and director Lynsey Miller that Sathnam is a fan of the TV adaptation, confessing at a recent BFI preview Q&A that he ‘loves it’, so that should alleviate any worries you have. Watch it with an open mind and have the book as a mere reference point.

On the other hand, if you’ve not yet read it, watching ‘The Boy With The Topknot’ will lead you to purchasing the book through sheer intrigue in wanting to know more about the characters whose lives you have momentarily just entered.

Listing
‘The Boy With The TopKnot’ – Monday, November 13 BBC2 9pm

Privacy & Cookies: This site uses cookies. By continuing to use this website, you agree to their use.
To find out more, including how to control cookies, see here: Cookie Policy
← Disney Launchpad – six short films aimed to speak to a new generation – executives and director interview; and review, ‘American Eid’
Bird Bites: Back to the theatre! Which shows are you seeing or want to see? →