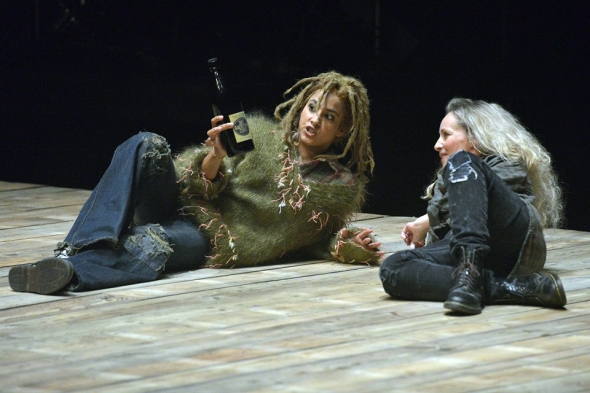 IT’S ALWAYS considered something of a holy grail when Asian actors appear in roles that are not written for them and their ethnicity.

The usual argument is that audiences get easily confused – they see a brown person and have certain expectations of them (Don’t we all…?)

But seriously, things are changing at the edges and making life for that hearty and brave band of Asian thespians a little bit easier.

At least, Sheena Bhattessa (pictured left) believes so, as she nears the end of the run in ‘My Generation‘, the popular and funny new play penned by former 1980s Chumbawamba pop band founder and member, Alice Nutter, now a TV writer.

The play on at the West Yorkshire Playhouse in Leeds ends its almost month-long stint on Saturday (October 26). Filled with music and on set changes carried out by the cast, it’s no conventional drama, and has received positive reviews.

Bhattessa, making her singing and guitar-playing debut, is cast in two different roles in ‘My Generation’, which spans 40 years and mines the lives of those who lived on the edges (both physically and mentally) during some of this country’s most turbulent periods – the miners’ disputes, poll tax riots, and muscular unions.

“There are a lot of problems and stereotypes because of a message that has to be portrayed to an audience,” Bhattessa explained to www.asianculturevulture.com, talking about issues of casting Asians in non-specific (ethnic) roles.

“It’s a shame because it makes it a lot more closed off for Asian actors, especially those who are educated and trained in the UK or the West, but I hope it is opening up – this is proof: doing a non-Asian part, as an Asian actor, is lovely and I hope the start of something.”

From the first stirrings of modern day feminism and active sexual politics in 1970s, through the Thatcher years and to the slightly, cynical and contemporary world of internet dating and twerking, the play leaves very little unturned in the world of counter-culture.

“It isn’t an Asian part, my characters names are Helen and Carmel,” Bhattessa continued.

She has reprised parts in ‘Eastenders’ and ‘Doctors’ – and appeared in ‘The Great Game’, a stirring Afghanistan war drama which was taken on tour to the US following a successful run at the Tricycle Theatre in London – and has enjoyed the challenge of playing a radical, feminist lesbian in the first half of ‘My Generation’.

We first see Helen stumble onto the stage drunk and is Cath’s best friend.

“We are all living in a squat,” Bhattessa described. “And there is a spare room and a girl called Frey comes to stay and lives with us and Helen ends up having a relationship with her. My intrigue (as Helen) with feminism and burning the bra leads me to become a lesbian for the rest of my life.”

For the urbane woman about town that Bhattessa is (in a parallel career), running her own PR outfit, this is quite the transformation – but wait, there is more.

“It’s challenging in a good way, it’s a real team effort,” she said, reacting to how different her other job is. “It’s very far from my own experiences, I take an interest in politics but I am not the most political person one way or the other – but Alice was there throughout rehearsals telling me about her experiences, going out on picket lines, and dealing with coppers; we looked through pictures and watched clips.”

It helps that Helen is also a passionate figure and upbeat and always looking for her next hit.

“Playing the wannabe radical feminist that turns into a lesbian couldn’t be more far removed from me, but it’s lovely to be playing a character that is passionate and really enjoys life and her pleasures, whether it’s alcohol, drugs, men or women.

“I take that passion that I have in my own life whether it’s for film, or acting or family and use that in a role like this.”

In the second half, Bhattessa is Carmel, who is involved with Ben, Cath’s son and despite her middle-class upbringing, takes it upon herself to organise concerts and raise awareness of disadvantaged groups. This flowers into the free festival movement, a forerunner of today’s rather more commercial festival enterprises.

“She’s not doing it for money, it’s pure passion for participation – you don’t need money to have fun. It’s not a consumer driven, materialistic society she is engaged in.”

At the very end Bhattessa is back as Helen, now a 65-year-old.

“She’s in a full-blown lesbian relationship with a woman 25 years her junior.”

What did her parents make of it all?

“One of the best theatres they’ve ever seen,” she said.  There, we said things were changing.