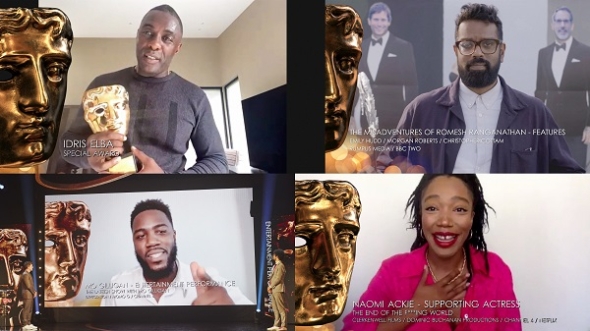 The Arsenal fan and former teacher, who started out as a stand-up, won in the Features category of the awards which were broadcast on BBC One in the evening in a 90-minute show.

There were also other standout awards for artists of colour. International star Idris Elba was also presented a Special Award.

It was an awards ceremony with a difference this year – the host Richard Ayoade introduced each award and was joined for some presentations by TV stars in the studio – including Himesh Patel, star of the BBC One’s ‘The Luminaries’ and the feature, ‘Yesterday’ — and other presenters remotely.

Ranganathan, who appeared to be using a dustbin as a presentation podium and against a carboard cut-out backdrop of three key members of his production team (see below), joked at the end of his acceptance speech: “It doesn’t mean as much to me as an individual award.”

A throw-away and comic line – it probably was also expressing some disappointment that his other BBC One nominated show, ‘The Ranganation’ lost out to ‘Taskmaster’ in the Comedy Entertainment Programme section.

He did however praise the production team behind ‘The Misadventures of Romesh Ranganathan’.

“They are incredible. It’s a real fun show to do.”

In ‘The Misadventures of Romesh Ranganathan’, the comedian travels to far off places most people would studiously avoid – it’s a show that mostly revels in his discomfort and onscreen humiliation.

A theme that show director Chris Cottam and producer Morgan Roberts elaborated on afterwards in the virtual media room post the awards.

The pair paid tribute to Ranganathan’s ability to stay in the moment – despite extreme and regular provocations. Past programmes have seen him visit the Arctic, Albania and the desert.

Cottam said: “It’s really impressive for talent. He gives audiences the most authentic version of that experience. Even when he is tired and uncomfortable, he still manages to deliver the goods.”

Roberts said that Ranganathan still whinges every time they set him on a travel challenge (“Can’t I stay in a hotel?” he asks) and the pair continue to plan new programmes with him.

While there was disappointment for Guz Khan (‘Man Like Mobeen’) in the Male Performance in a Comedy Programme (MPCP), there was double delight for fellow nominee Greek-origin Jamie Demetriou for ‘Stah Lets Flats’ – his Channel 4 sitcom also won Scripted Comedy.

Along with fellow nominee in the MPCP category, Moroccan-born Youssef Kerkour (‘Home’), the three discussed how they made their way into television as outsiders in a BAFTA panel discussion last week.

They expressed mutual admiration for each other’s work and Khan said he wanted to put across the humour of everyday people in his BBC sitcom., ‘Man Like Mobeen’.

Another comedian who stole the spotlight last night was Mo Gilligan who won in the Entertainment Performance category for his Channel 4 show, ‘The Lateish Show with Mo Gilligan’.

In the media room after receiving the award from Himesh Patel, Gilligan said it was hard to take in – that he now had a Bafta.

He said he was delighted just to have been nominated and was thrilled to be in such company (see list below).

“Just three or four years ago, I was doing comedy on the circuit and I was working in retail. I have pinch myself moments.”

In his broadcast acceptance speech, he said he hoped his win would inspire others from similar backgrounds to his to get on TV.

A black South Londoner, he is another Bafta winner who honed his craft as a stand-up first before fronting his own chat show.

He said: “It also gives hope to so many people who sound like me, look like me and are from the same background.”

Naomi Ackie won the Supporting Actress category – she was a first-time nominee for her part in ‘The End of the F***ing World’ – a dark Channel 4 comedy drama.

She was shocked when receiving the award, but later reflected on her win, saying her character had issues people did not always feel kindly towards.

“She is struggling with mental illness and being a black woman, it is heavy and empathy for that is sometimes lacking.”

In the broadcast, Elba joked that when Bafta first contacted him about his award – he felt it was too early for a lifetime achievement award.

But the special Bafta he got last night was in recognition of “exceptional career and commitment to championing diversity and new talent in the industry”.

He said his East London background had played an important part in shaping his character and wanting to give people an opportunity.

“It’s just part of my inheritance and upbringing, you can’t make it without other people.”

Later he elaborated: “It’s a reach one, teach one, duty. You’ve got to look over your shoulder and give people that opportunity.”

He said he enjoyed directing and producing and would continue to act and was looking to make his successful BBC TV detective series, ‘Luther’ into a feature film.

“It’s happening. There will be a more involved storyline – international and up-scale but John Luther is always going to be John Luther.”

Responding to a question from www.asianculturevulture.com about his lowest point and savouring his Bafta, he said: “The late 1990s was tough as an actor, but the struggle got me prepared for the next stage which is where ‘The Wire’ took off.

“The rough part is necessary and character building – I wouldn’t wish the rough parts on anyone, but it makes you appreciate what you get.”

Elsewhere, Ayesha Rafaele is part of team that won the Best Single Drama Award for ‘The Left Behind’. It was made for BBC3 and is about a young man who gets into extreme right-wing politics and violence.

The BBC’s popular ‘Race Against the World’ won the Reality and Constructed Factual Category.

Two Brits of Bangladeshi origin, Emon and Jaimul Choudhury (uncle and nephew) took home the prize this year – which sees pairs of travellers given a limited amount of cash and told to find their way to destinations without smartphones.

The Choudhurys had to cross both Central and South America and were pitted against four other pairs. Planning for series Three has begun and will take into account current restrictions related to the global coronavirus pandemic.

The International Award went to ‘When they see us’ – directed by Ava DuVernay who is champion of diversity in Hollywood.