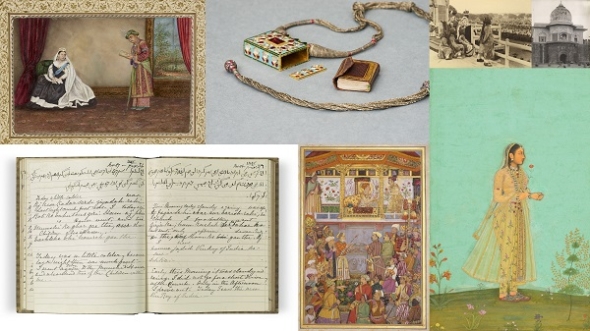 THERE’S a chance to get up and close to the Empire through a series of photographs and paintings that have just gone on display.

Several have never been seen before in public – including some 20th century photographs from the Royals’ own private collection.

There is also a miniature Qur’an which came into the possession of the Crown following the First War of Indian Independence (1857) and the exile of Zinat Mahal Begum – to whom it is understood to have belonged – and her husband, Bahadur Shah Zafar.

He was the last Mughal Emperor, and sent to Rangoon (Burma/Myanmar) for his role in the unsuccessful uprising. Possessions such as these remain the subject of intense controversy between Britain and India, Pakistan and Afghanistan and Iran – unlike some other items in the exhibition, this was not an obvious gift and has a similar status to the Koh-i-Noor diamond in the Crown Jewels.

‘Eastern Encounters: Four Centuries of Paintings and Manuscripts from the Indian Subcontinent’, mounted at The Queen’s Gallery, Holyroodhouse in Edinburgh, opened last late week (Thursday, July 23). You must pre-book your visit and public health protocols are in place. (See the link below).

Emily Hannam from Royal Collection Trust and exhibition curator told us and other media at a Zoom press view that she wanted to tell the story of Empire from its origins to its eventual demise in 1947 through the collection.

The exhibition starts with paintings and also has photographs from the late 19th century and early 20th century that tell the evolving story of Empire – especially apt during what is South Asian History Month (July 17-August 17).

Much of the collection and the new exhibits had to be made suitable for public viewing and involved painstaking restoration in some cases, she said.

“The Indian sub-continent is home to some of the richest cultural and artistic traditions in the world. It is magnificent and wide-ranging and how do you tell such richness and diversity in one exhibition?” she posed.

Most striking to the modern mind is perhaps a photograph of King George V and Queen Mary at Red Fort in Delhi 1911 (pictured below). In this picture, they were consciously re-enacting a role played by the once mighty Mughals who ruled an empire that covered most of the subcontinent.

“They (the monarchs) very consciously adopted South Asian courtly rituals such as Darbars, processions, and big game hunts and projected themselves as heirs of the Mughal Emperors of the past,” explained Hannam.

Another photograph (pictured below) recovered from the Queen Mary’s own private photo album shows her and the ruling monarch high up but alone – a metaphor, perhaps, for our how remote the Royals were from their subjects in that part of the world.

For Hannam, 1911 and that trip by George V represented the “swansong of the Raj – no monarch ever went back (as a King or Queen),” elucidated Hannam, responding to a media question about why Queen Victoria, despite being declared Empress of India (by then prime minister Benjamin Disraeli) in 1876 never visited. Travel was arduous and she had health issues, is the short answer.

It was clear even in 1911 after the Grand Darbar and the coronation of George V as Emperor of India – and even though many princes and rulers of local states attended the ceremony in Delhi – that change was afoot.

The exhibition begins with an ‘Early Encounters’ section and covers the period of the Mughals, who ruled over great cities, including Kabul (Afghanistan) and Lahore (Pakistan) and Delhi (India) from around the 16th century.

At the time, the nascent East Indian Company enjoyed only trading rights and the Mughal ruler was said to have been disappointed with the gifts Roe brought from Europe. He is depicted in one painting as being lowly and not of much importance (see below).

Hannam pointed out: “The Mughal Empire was richer and stronger than any European Empire.”

It was also a centre for international art, culture and crafts and gifts were exchanged – including books of Mughal poetry which can also be seen in the new exhibition.

The second section is ‘Victorian Encounters’ – and deals with Queen Victoria’s own fascination with the sub-continent, her Hindustani diaries and photographs of her munshi – Abdul Karim, made more famous by the recent film ‘Victoria and Abdul’ (2017).

The other sections are ‘Design Encounters’, ‘Divine Encounters’ and it ends with ‘Encountering the Raj – Tradition and modernity 1858-1947’.

Imtiaz Dharker, the award-winning poet and artist has read a selection of work inspired by some of the exhibits and you can see and hear these, just follow the link below.

Some of these works have been seen in the exhibition, ‘Splendours of the subcontinent‘ (Queen’s Galley, Buckingham Palace 2018) but new displays have been added, including several pertaining to Scotland.

More images on display at Eastern Encounters at Holyrood House in Edinburgh – all images above and below ©Royal Collection Trust (RCT)/ Her Majesty Queen Elizabeth II 2020. Not to be reproduced except in relation to the exhibition, ‘Eastern Encounters’

To see captions, put browser over picture, to see gallery click to enlarge and view and use <> to navigate…