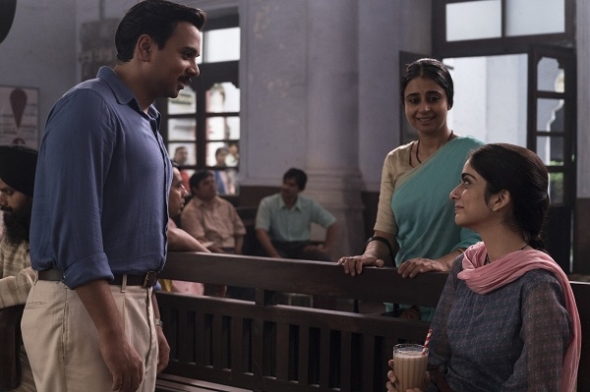 Still not sure about this TV adaptation? Perhaps Episode 3 will change or reinforce your position…?

LOVE is very much in the air – and the major character arcs are developing as we reach the half-way point in filmmaker Mira Nair’s BBC TV adaptation of Vikram Seth’s modern classic novel, ‘A Suitable Boy’.

Both ‘Lata’ (Tanya Maniktala) and ‘Maan’ (Ishaan Khatter) have been banished for seeking out illicit liaisons – both crossing religious lines (Hindu-Muslim) and in the case of Maan, with a woman of some vintage and dubious social proprietary.

This episode sees another one of Lata’s suitors stake his claim – the brilliant young poet that is ‘Amit Chatterji’ (Mikhail Sen).

Lata’s mum (Mahira Kakkar) is none too keen – her eldest son is married to Amit’s sister (Shahana Goswami) and Lata ‘Ma’ (as everyone calls her) already has it in for her – having pawned family heirlooms to make sparking silver earrings.

The Chatterjis are crass, hedonistic and not to be trusted – not that our dear Lata knows any of this – yet.

She seems mildly amused by Chatterji’s overbearing aestheticism and pretentious posturing – perhaps to the point of seduction.

She hasn’t yet fallen into his arms – remember this is 1951 and she has already quite willingly succumbed to the charms of Kabir Durrani (Danesh Razvi), a most dashing, handsome student with a cover drive to match Sachin Tendulkar’s. But he being from the other side of the religious tracks – as a Muslim – Ma has taken fright and packed their bags for Calcutta, leaving their native small town (fictional) Bramhpur.

And then, Mrs Mehra (Ma) in true contemporary Netflix ‘Indian Matchmaking’ style heads to Lucknow to find her Lata, a worthy companion.

After a sherry or two and some left swiping (in modern parlance), she forces a friend to find someone truly suitable. They are either too rich or too desperate…how times have changed.

Her friend emboldened, no doubt, by the sherry, comes up with the most eligible Haresh Khanna (Namit Das) an English qualified shoemaker and manager.

Mrs Mehra is beside herself – but why was her friend so reluctant initially – he was keen on a Sikh lady, she confesses.

The date with Ma in tow goes swimmingly, until he takes mother and daughter on a tour of the tannery.

Neither is impressed by the odour or the conditions, but Haresh makes himself look good when he gives an elderly worker time off to spend with his daughter who has been hospitalised.

Haresh also emphatically announces that his Sikh friend has passed on and her family are seeking alliances for her, with only Sikh boys.

Both are touched by Haresh’s generosity in the workplace and Ma is hoping Lata will stop looking at pretty boys and focus on a man of substance and ambition.

Speaking of which we can’t go without updating you on our dear Maan.

Khatter may be beginning to hit his stride – he wasn’t wholly convincing in episodes 1 & 2 – whether that was his fault or Nair’s, we shall leave to you … here in the fields and the heat, the wandering lovesick poetic figure looks more at home – until he almost kills someone with his bare hands.

He has the righteous indignation of his father (the rather excellent Ram Kapoor as Congress politician and home minister, Mahesh Kapoor) – but unlike his politician father, the young Maan doesn’t know how to channel his energies to meaningful ends. No doubt this sub-plot is to be continued…

We also see more of Maan’s best friend the young landed gentleman that is Firoz Ali Khan (Shubham Saraf) – who falls rather rapidly for Tasneem (Joyetta Dutta) – the courtesan Saeeda Bai’s (Tabu) younger sister. No good can come from this infatuation either, surely?

Lata is the subject of a horrible, and very brazen pass from an uncle who thinks his material kindness must be repaid in kind.

The episode ends with Maan being summoned back to the embrace of Saeeda Bai and her luscious singing voice – and right at the very end, there’s a death foretold….it’s all heating up quite grandly…

Privacy & Cookies: This site uses cookies. By continuing to use this website, you agree to their use.
To find out more, including how to control cookies, see here: Cookie Policy
← Cannes Film Festival 2018 (today): Nadine Labaki – scaling the Cannes ladder, how to do it as a young filmmaker from a non-traditional background…
Cannes Film Festival 2018: ‘BlacKkKlansman’ – both Sonam Kapoor-Ahuja and Mahira Khan walk Red Carpet world premiere for new Spike Lee film →