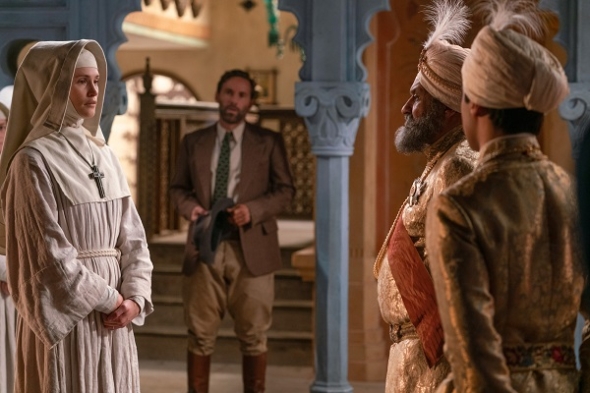 Filmmakers went back to original novel for inspiration, while appreciating the 1947 screen version is an untouchable classic…

BEAUTIFULLY shot and well-acted, the BBC’s version of the film classic, 1947 ‘Black Narcissus’ is well worth a view, if you love the original and want something that is not a clone – but still has something different and valuable to offer.

It is distinct – parts of this are actually shot on location in Nepal, unlike the original which was shot at Pinewood Studios in Berkshire.

The basic story is that a group of British nuns set up a school and nunnery in a remote abandoned palace in the Himalayas (modern day Nepal) in 1934.

There are colonial overtones – the nuns are on an educational mission and the project has a sense of doom about it, though that isn’t immediately apparent.

Some see it as a metaphor for colonialism itself and the novel, from which both versions are inspired, written by English novelist Rumer Godden and first published in 1939, exhibit a greater sympathy for locals than much of English commentary about the subcontinent at the time.

This version, unlike the 1947 film, has given the Nepali characters more of a role and ‘Kanchi’, who barely features in the Michael Powell and Emeric Pressburger screen classic, is played by newcomer Dipika Kunwar, who is actually of Nepali origin.

Kulvinder Ghir is ‘General Toda Rai’ (who gifts the nuns the palace) and Chaneil Kular, plays his son, ‘Dilip Rai’, who becomes the only male adult pupil at the school. Diana Rigg appears as ‘Mother Dorothea’, in one of her final roles and Jim Broadbent is there at the beginning and towards the end as ‘Father Roberts’.

Gemma Arterton leads a very fine cast as the main protagonist in the drama – ‘Sister Clodagh’.

The main male character ‘Mr Dean’, is played by Alessandro Nivola (‘The Art of Self-Defense’) and his dangerous presence, in both an overtly and subconsciously sexual sense, is what lies at the heart of this drama, alongside a triangular tension involving the young Sister Ruth (Aisling Franciosi).

The film gains from the location shooting – most of the substantial exterior shots were done in the beginning in Nepal itself and the mountains, the air of mystery and that feeling of isolation, is amply reflected and give the film further edge and tension.

So too does the immediate setting of the palace and what it was before – ‘A House of Women’ or perhaps more bluntly, an abode for a king’s harem with a particular ghost perhaps still haunting the surroundings.

There are obviously sexual overtones all over the place – parts of the original had to be cut for US audiences who were not ready for this sort of drama – though the original is hardly explicit and this too is far from obvious – much of this drama is between the subtle interplay of characters’ perceptions and not their overt actions.

This production delves more deeply into Sister Clodagh’s path prior to her joining this order of nuns, who – at the beginning – are based in Darjeeling in the North east before making the decision to move westwards to Mopu in Nepal to set up there.

Sister Clodagh is given the task and is determined to make a success of it, when everyone tells her it will be impossible and that a previous attempt by some German monks failed spectacularly and led to the death of the General’s sister, Srimati Rai (Gianni Gonsalves) and seen in flashbacks.

In what is Charlotte Bruus Christensen’s first outing as a director – she is a well-established cinematographer having made (‘A Quiet Place’ and ‘Molly’s Game’) – and experienced Bafta-Award winning writer for ‘The Room at the Top’, Amanda Coe’s script, the female lens is very much to the fore and perhaps yet more sympathetic to Godden’s novel than Pressburger and Powell were.

This much was evident when five of the women involved in this production discussed its making with host Rowan Woods at a BFI at Home series earlier this month (Please see below for link).

All in all, this is fine production, made by DNA Films and distributed by the FX Network.

Some might find its early 20th century underpinnings too slow, too subtle and too delicate to truly appreciate or persevere with – but as anyone who is familiar with the original film – there are huge and memorable compensations.
ACV rating: ***½ (out of five).