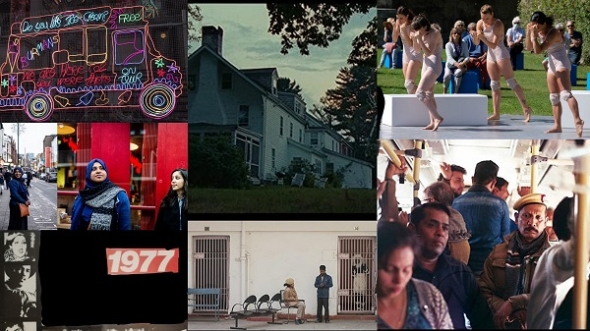 Do you know your Dev Patel from your Riz Ahmed? Or your Nitin Sawhney from your Anoushka Shankar? Read on and find out…

BEFORE the mince pieces have been consumed and the mulled wine is finished, acv has created this festive quiz for you to test your wits against family and friends and astound them with your ‘culture vulture’ credentials.
It’s been a difficult year for arts for all of us, so this quiz is a little shorter but team acv hope you still enjoy this festive fare and here’s looking forward to 2021.
Note: ACV contributors and family members cannot take part in this quiz…. (psst, some clues are in the pictures and you can search the site, though some might see this as cheating…)

1. Which Asian actor appeared in the film Sound of Metal as a drummer who is suffering from hearing loss?
a) Jimi Mistry
b) Riz Ahmed
c) Hamza Haq
d) Mikaal Zulfikar
e) Amir El-Masry
For a bonus point name the character he plays in the film…

2. Which British film has been nominated for seven British Indepdent Film Awards?
a) Rocks
b) Mogul Mowgli
c) The Reason I Jump
d) Saint Maud
e) The Father
For a bonus seven points, can you name the categories & just consider yourself a winner and pat yourself on the back if you can name all the people in those categories.

3. White Riot is a film that tells the story of which protest movement?
a) MeToo
b) Black Lives Matter
c) Rock Against Racism
d) Extinction Rebellion
e) World Earth Day
For a bonus point can you name the director…

4. Who played the role of Apu in Satyajit Ray’s film, ‘Apur Sansar’ (‘The World of Apu’ 1959)?
a) Subrata Mitra
b) Sanjeev Kumar
c) Chhabi Biswas
d) Uttam Kumar
e) Soumitra Chatterjee
For a bonus point how many of Ray’s films did this actor appear in?

2 Which prominent Indian journalist had his account suspended by Twitter said to be the work of the Deshi Army? (PS: The account has now been reinstated)
a) Arnab Goswami
b) Barkha Dutt
c) Salil Tripathi
d) Prannoy Roy
e) MJ Akbar
For a bonus point name the journals the writer contributes to…

3 Which British film had its world premiere at Berlinale 2020 (Berlin Film Festival) and was part of the London Film Festival 2020?
a) Bloody Nose, Empty Pockets
b) Pari
c) Surge
d) Mogul Mowgli
e) Black Milk
For a bonus point name the director…

5. Which Indian film that had its premiere at the Berlin Panorama 2020 was also shown on the We Are One Global Film Festival?
a) The Disciple
b) Meel Pathar
c) A’hr
d) The Salt in Our Waters
e) Eeb Allay 000!
For a bonus point name the director…

3 Which actor (female) won the Olivier this year for Best Supporting Role in a Noel Coward play?
a) Indira Varma
b) Rina Fatania
c) Meera Syal
d) Priyanga Burford
e) Maimuna Menon
For a bonus point name the title of the play…

4 Which writer/actor has been producing work around the theme of ‘touch’ on the lives of people in Luton?
a) Sudha Bhuchar
b) Riz Ahmed
c) Shaheen Khan
d) Ameet Chana
e) Daniel York Loh
For a bonus point give the title of the work…

5 Who directed an adaptation of ‘Three Sisters’ by Chekov and also appeared in the Stage 100 list
a) Indhu Rubasingham
b) Pooja Ghai
c) Kristine Landon-Smith
d) Poonam Brah
e) Nadia Fall
For an extra bonus point, what number is she on the list and what is her job title…

Comedy – treat for getting this far!

There has not been much to laugh about this year but we are introducing you to a special Youtube video created by two young actors, Hamza Jeetooa & Natalie Perera – whose short YouTube films have brought some festive cheer this year…
Eastenders Christmas Special Parody (Representation Matters)

1 Which dancer/choreographer who was awarded the MBE in 2019 produced a series of short works for viewers on digital for audiences in 2020?
a) Seeta Patel
b) Shobana Jeyasingh
c) Urja Desai Thakore
d) Akram Khan Company
e) Amina Khayyam Dance Company

3 What is the professional name is the artist Svetha Yallapragada Rao known by? (Clue: she sings the song, ‘Afreeda’ in the film, ‘Dil Bechaara’)
a) The Salvage Audio collective
b) Dee MC
c) Raja Kumari
d) Hard Kaur
e) M.I.A

As a Bonus dance extra – we thought you might enjoy this piece by Mahina Khanum reinforcing the message of Hands, face, space in a novel style.…

1 Whose debut novel is described as dealing with the 3R “routemasters, reading and rioting”?
a) Gautam Malkani
b) Preeti Taneja
c) Koushik Banerjea
d) Hari Kunzru
e) Bidisha
For a bonus point can you tell us the real title of the novel…

2 Who won this year’s written word digital commission for At Home in the World run by the Bagri Foundation?
a) Humble the Poet
b) Shagufta Iqbal
c) Sanah Ahsan
d) Kia Abdullah
e) Imran Mahmood
For a bonus point name the title of her commission

3 Who presents the ACV Bird Eye Review show?
a) Aarti Khetarpal
b) Natalie Barrass
c) Lilly Singh
d) Brigitte Leloire
e) Shay Grewal
You will have to deduct 5 points if you get this wrong! haha.

2 Name the actor who played the role of Yasmin Metcalfe in the ‘domestic violence’ storyline popular soap?
a) Souad Faress
b) Shelley King
c) Balvinder Sopal
d) Harvey Virdi
e) Fiona Wade
For a bonus point, name the title of the soap…

3 Which series won India’s first ever International Emmy Award?
a) Sacred Games
b) Delhi Crime
c) Fabulous Lives of Bollywood Wives
d) Made in Heaven
e) A Suitable Boy
For a bonus point, name the director of the series

4 Which artist played the lead role of the mathematician dubbed “the Human Computer” for a 2020 film?
a) Mandeep Gill
b) Vidya Balan
c) Hema Malini
d) Archie Punjabi
e) Lara Dutta
For a bonus point, name the title of the film…

5 Who played the upstart rapper in Mogul Mowgli and also appeared in the BBC series, The Industry?
a) Mawaan Rizwan
b) Hussain Manawer
c) Rishi Rich
d) Nabhaan Rizwan
e) Punjabi MC
For a bonus point, what is the rapper’s name…

1 Which British Asian artist has ‘mashed up the Tate facade?
a) Zarina Bhimji
b) Sutapa Biswas
c) Chila Kumari Singh Burman
d) Mithu Sen
e) Sam Madhu
For a bonus point, name the title of the installation and for an extra bonus point what is it inspired from…

4 What is the exhibition ‘Eastern Encounters: Four Centuries of Paintings and Manuscripts from the Indian Subcontinent’, all about?
a) Relationship of Raj and Empire
b) Victorian memorabilia
c) Flora and fauna of India
d) Partition of India
e) Celebrating artistic life in UK
For a bonus point where is the exhibition currently (even if the gallery is closed due to Covid-19 restrictions!)

Enjoy – we will reveal the answers on Thursday, December 31 and make sure to follow on social media. Tell us how you’re getting on… Till then, Happy Holidays! And enjoy the festive fun as best as you can in these Covid-19 times…!