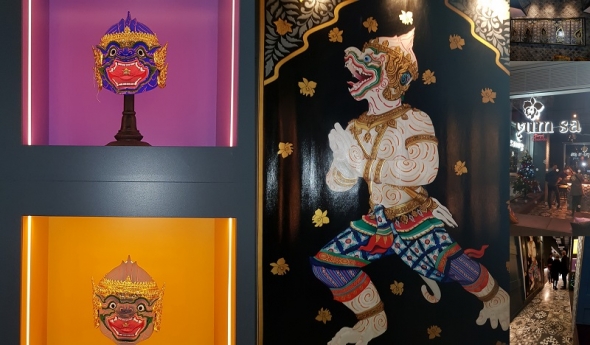 YOU DON’T expect to find Asian art treasures old and new art tucked away in a suburban restaurant.

But that is precisely what will you will find in Yum Sa, a largely Thai inspired new restaurant in East Putney, which also has a dedicated permanent art gallery space.

The restaurant and the gallery opened just last month and will play hosts to a new exhibition of work by British artist Dr Chila Kumari Burman this month.

A well-established name in mixed media, some of her latest work can be seen as part of the Illuminate India season at the Science Museum in Kensington. Dr Burman’s work goes on display (to sell) at Yum Sa from January 6. Her work is very contemporary in outlook and explores both her Liverpudlian and Punjabi working class roots and gives expression to a modern and accessible form of feminism that challenges tradition and established forms of power.

Last month, the art gallery displayed vernacular art (mostly what lay people might refer to as tribal or folk art) from India.

Ruchika Soi Narula, an art buyer herself and former National Gallery of Modern Art in New Delhi tour guide, runs the gallery, while her husband, Bobby, runs the restaurant side.

“We wanted to do something a bit different than just having a Thai restaurant.

“We are very inspired by the art of Asia and the spiritual element of both Indian and Thai art,” explained Narula to www.asianculturevulture.com

As well as a gallery, the restaurant also has meditation rooms and is keen for the community to avail itself of the new facilities.

“It is part of our philosophy of well-being. We are not charging people to use these rooms. We would like to be a community resource,” Narula explained.

At its opening, Buddhist monks from the nearby temple in Southfields officiated.

Hanuman from The Ramakien

The restaurant is conveniently located – being on a main road and just off Putney High Street and practically opposite East Putney tube station.

As well as the art gallery exhibition space which is towards the rear of what appears to be a circular space, there are some other permanent and arresting and unusual features to Yum Sa.

On entering, there is a magnificent large mural of the Hindu monkey god, Hanuman – but in an elaborate and distinctive Thai style. There is also another mural inside.

These are commissioned works and created by Dwarka Singh, an artist attached to the Jaipur City Palace in India and who grew up in nearby Amer. Singh lost his parents at a young age and was cared for by an uncle who was an artist based at the City Palace. His family have been involved in art for many generations, but Singh has no formal training.

“Dwarka Singh specialises in this style which is inspired by the art work contained in the Royal Palace in Bangkok.

“He has created this series by working in the style of his forefathers, though in a genre not entirely familiar to him, yet not wholly alien. Intuitively and painstakingly, he has recreated these images from the murals of the Grand Palace in Bangkok.”

India and Thailand and indeed, much of South-East Asia, had a shared culture many years ago – Indian traders and scholars first bought Hindu ideas and texts with them from the 13th century.

Hindu stories from ‘The Mahabharata’ and ‘The Ramayana’ (ancient Hindu stories) travelled east and were adapted by local communities who practised a form of Hinduism inspired by ‘The Ramakien’ (The Thai text based ‘The Ramayana’) and which gave way later to Buddhism.

Nevertheless, there remain many traces of this shared culture in art and artistic expression and Thailand has a settled Indian origin community which has been there for many years.

Close to the Hanuman are two fearsome masks – these Khon creations are by Thai Khan Prateep Rodhpai, whose family have been involved in this ancient traditional artistic practice for years.

The other very permanent ‘Indian’ touch is the flooring – 27 tons of floor tiles from Bharat Tiles in Mumbai.

“This was manufactured by the grandson of a man who was told to create an Indian tile company by Mahatma Gandhi. The Indian leader encouraged it as part of the Swadeshi movement (created to foster economic self-sufficiency and independence from Empire)” explained Narula.

“We wanted something different, and distinctive,” added Narula.

Husband Roger trained in the US and has been involved in the restaurant business for many years.

Based out of Dubai, they became very successful supplying the many Thai and oriental eateries in the region.

“It was my husband’s dream to start a restaurant of his own and we had the space to exhibit Asian art which I am very passionate about.”

Among the works which could be seen and purchased were displays loosely centred around the themes of fertility, creation and natural phenomena. Narula chose a younger generation of artists whose family have national awards winners and been feted at a national level. Many are still making a name for themselves and the price of much of the art on display last month was under £500.

Some of these framed works are more commonly etched on walls inside homes and contain traditional motifs and symbols of worship.

Among those in the gallery was work by Sunil Kumar Shyam – an artist from the Gond community. This tribal group extends over much of central India. Their art has a resemblance to Australian Aboriginal artistic expression.

One of the first artists to be discovered from outside the Warli community in Maharashtra was Mahadev Dombhare – his son Amit Mahadev had work displayed at Yum Sa. Traditionally this group use cow dung and rice paste to create their works.

From Northern Bihar there was work by Ambresh Jha, whose mother Bauwa Devi, is one of the foremost Madhubhani artists of the day.

Anil Bariya is the son of award-winning Bhil artist, Bhuri Bai. Bhil is from a part of Madhya Pradesh, Baroda district in Gujarat and a part of Rajasthan. Bhil artists make frescoes and often use maize to make fine dots in their works which are about creation, and often illustrate a horse.

From the birth place of the Hindu deity, Krishna, Mathura in Uttar Pradesh, is Sanjhi art. Derived from the word Sandhya (dusk), it denotes that time when Rangoli and other floor decorations are made. The works of Vijay Sohni, brother of award-winning brother Ram, were among those on display. The Sonis can trace their artistic practice back over several generations.

This exhibition ended yesterday (January 2). After the display of Dr Burman’s work, Yum Sa will host an exhibition of the photographer Rahul Gajjar who has been documenting the ancient city of Champaner in Gujarat – and has created jewellery and other items inspired by the artistic practices that once made the city famous in a different era.

Privacy & Cookies: This site uses cookies. By continuing to use this website, you agree to their use.
To find out more, including how to control cookies, see here: Cookie Policy
← ‘Garbage’ – cult director Q’s latest transgressive work will upset many (he hopes…) as it enjoys world premiere at Berlin International Film Festival 2018
#JeSuis’ (review) – Aakash Odedra’s first dance collective piece is stunning and unforgettable…. (European premiere) →