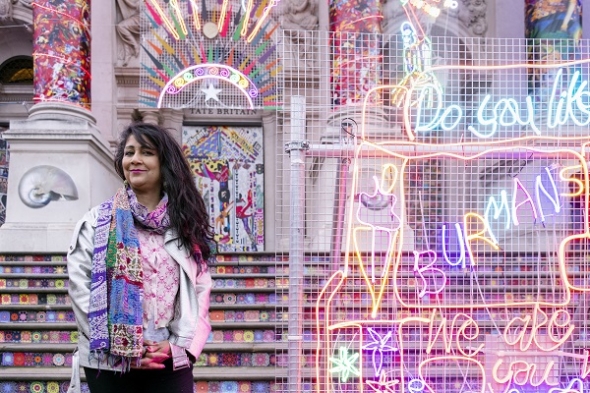 Artist’s has mashed up façade of Tate Britain in London with powerful, arresting and amusing motifs…

IT HAS BECOME an unlikely tourist attraction as cabs stop outside the Tate Britain, Millbank while visitors take photographs of the vibrant colourful installation that’s been covering the Tate portico since it was officially launched on November 13, 2020 to celebrate Diwali, the Festival of Lights.

It is the work of Punjabi-Scouser artist, Dr Chila Kumari Singh Burman who told www.asianculturevulture.com: “I’ve mashed up the Tate facade, people come here to heal themselves, take selfies and it’s hope for the future”. (You can see more on our video interview with the artist below).

Burman has been entertaining and educating audiences for over 30 years since she delighted us with her piece, ‘28 positions in 34 Years‘ (1992) a series of self-portraits of the multifarious identities of an Asian woman subverting and challenging stereotypes.

It was made using ink on paper and laser printed, and Burman’s interdisciplinary artistic practice uses a variety of techniques and approaches ranging from printmaking, film, installation, photography, sculpture, painting, collage, drawing as she focuses on examining issues of race, representation, feminism and activism.

Her work is inspired by the ethos of her late Punjabi immigrant parents (Kamala Vati and Bachan Singh), her South Asian cultural heritage that she grew up with in Liverpool and helping out in her father’s ice-cream van as he sold ice-creams on Freshfield beach, Merseyside.

Bachan Singh arrived in the UK on the Batory steamship and was later followed by his wife and two children (Billy and Ashra) on the same ship. Their story was featured in the BBC2 series, presented by historian Yasmin Khan, ‘A Passage to Britain’ but you can see a picture of Chila with her brother, Ashok (middle) and Billy (left). (See the link here or below).

Three other siblings, Chila, Ashok and Magic (known as Ashan – now late) were born in Liverpool. She went to Southport College of Art to do a foundation course and then Leeds Metropolitan University (1979-1981) for a BA Honours in Fine art, specialising in printmaking, painting and drawing, and then to the Slade School of Fine Art (1981-83) for her masters in printmaking and drawing.

To date her work has been featured in over 120 group exhibitions including ‘No Colour Bar: Black British Art in Action’ 1960-1990, Guildhall Art Gallery, London (2015-2016); and 48 solo exhibitions including ‘Majajini’ (Rich Mix London 2015), ‘India Illuminated’ (See link below) which was a special commission by the Science Museum in 2017 as part of its major exhibitions, ‘Illuminating India’.

Her work is collected by the V&A, Wellcome Collection, Tate, Devi Foundation, New Delhi, New Art Gallery, Walsall and her supporters, including many private individuals.

In 2018 she was awarded an Honorary Doctorate by University of Arts, London citing that “Burman’s work challenges convention and leads a discussion of how art can embrace diversity and difference in today’s world”. (For more on this, please see the link below)

Burman has been quietly decolonising arts institutions with her eclectic and animated work displaying an ‘in-yer-face’ attitude of the Punjabi rock chick that she is!

Privacy & Cookies: This site uses cookies. By continuing to use this website, you agree to their use.
To find out more, including how to control cookies, see here: Cookie Policy
← ‘Sukanya’ opera – Ravi Shankar work thrills (review) Shankar 100 opener
‘Sukanya’ – “I feel that I have to be part of this – Raviji meant a lot to me”. Musician Pirashanna Thevarajah on return of unique opera as Shankar 100 curtain raiser hits Southbank →