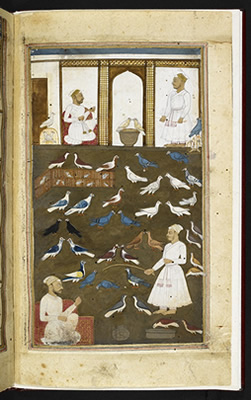 IT was one of the greatest civilisations the world has ever seen and its empire at its height stretched from Afghanistan to the lowland plains of the Deccan in India.

The recent Mughal India: Art, Culture and Empire, which was staged at the British Library (BL) in London and came to a close at the beginning of this month, will now transfer to Kabul for early May.

The exhibition, which was one of the largest ever mounted in the UK on the Mughals, will be housed in Afghanistan in the Queen’s Palace Gallery in the Babur Garden. The site is immediately adjacent to the tomb of Babur, the first Mughal Emperor.

May also sees the digital unification of one of India’s great epics, the Ramayana, go on display at the British Library in King’s Cross. It will be the first time that two parts of fragments of a 17th century illustrated manuscript will be unified and exhibited.

The BL holds about 80 per cent of the original of the Mewar Ramayana as it is known, while the remainder is in the possession of CSMVS Museum in Mumbai and other Indian institutions.  Under an agreement signed in 2010, the BL and the Indian institutions will share their knowledge and expertise in bringing the manuscript together for the first time.

The collaboration follows closely on from prime minster David Cameron’s visit to India in February which further consolidated and strengthened links between Britain’s premier educational and cultural institutions and their Indian counterparts.

The Mughal Art, Culture and Empire exhibition mounted between November and April was part of this collaboration and proved to be hugely popular.

A BL spokeswoman told www.easterneye.eu earlier this month: “We don’t yet have exact figures, but the exhibition has been one of our most popular to date.”

Spanning more than 300 years and featuring over 200 objects, the exhibition was probably the largest display of Mughal artefacts shown anywhere in the world, certainly outside India.

Unlike previous exhibitions, which tended to focus very much on Mughal art, this was much deeper and more extensive.

It contained works on nature and Mughal administration and jurisprudence, giving the visitor perhaps the comprehensive perspective on what life under the Mughals might have been like.

What comes through is the way that the Mughals maintained and developed their empire and embedded it in the existing culture they found.

They did not seek to obliterate prevailing customs or practices, though some were more zealous about their Islamic faith than others (and that debate continues to rage in India itself), but often incorporated them into Mughal practices.

One illustration of this was the coins manufactured under the Mughals, some of which depicted Hindu gods, as well as more traditional Islamic symbols.

Of course the glory of Mughal India is no better exemplified than with the construction of the Taj Mahal, and while some drawings and paintings displayed dealt with the Taj, there was a much wider selection of lesser known artefacts and wonders of the Mughal era.

The comprehensive nature of the exhibition lent itself well to the idea that Mughal civilisation was one of the greatest ever to be seen on earth and that its demise, hastened by the deft hand of British colonial ambition, left a towering legacy that still remains evident in so many facets of Indian life today.