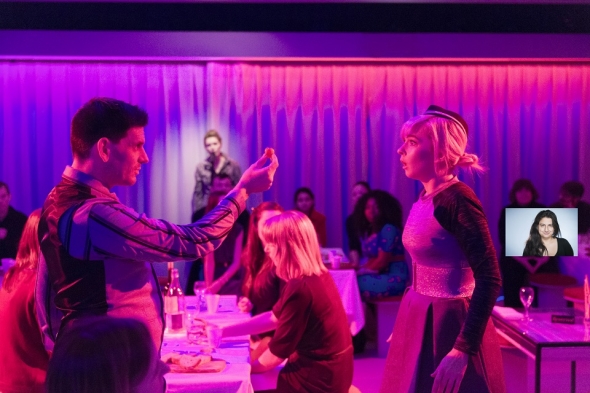 A PRODUCTION called “Gastronauts”, which is on at the Jerwood Theatre Upstairs at the Royal Court in London, is an experience in immersive theatre which you will either enjoy or not.

It was not really my cup of tea, although I have to admire the efforts of the five strong ensemble cast, who are up and close and intimate with the audience and that help to break down the barrier between them, as performers and us, as an audience, to create a “theatre adventure with food and music”.

“Gastronauts”, was conceived  by up and coming writer, Nessah Muthy (pictured inset and who works part-time as an usher at the Royal Court) and had her short play “Hungry” performed within the Royal court building in June 2013. (For “Hungry”, check the audio link below).

Muthy then worked with experienced writer, April De Angelis (whose very successful play, “Jumpy”  was on at the court and subsequently had a West End transfer, last year), along with director, Wils Wilson.

Basically, “Gastronauts” is a satire about the food we consume and our relationship to it.

Every short scene is interspersed with titbits of food served to the audience. Some scenes are sung but it’s often hard to hear the words of the ditties being belted out with gusto by the cast.

You enter the auditorium which has been transformed to resemble an airport lounge, with announcements telling you that you will be boarding soon and as you wait, you are invited to have a small refreshing drink – mine tasted like ‘rasam’.

Finally, we enter a cabaret style restaurant and we are seated at a table that has a bottle of water and a bottle of slightly watered down ‘good ordinary claret.’ (It did taste good, I must confess!)

Here an MC type figure (Alasdair Macrae) introduces us to what’s going to happen through a little song number. It’s all about food – what’s in your plate? Where does it come from and what does it mean?

If you are seeing the show, stop reading this review now, as it contains a spoiler!

We begin with being offered bread to eat with oil and vinegar, while an actor makes some bread – later we move to the joys of eating ‘my granny’s soup’ and we are served it ,(a vegetarian broth which did taste good).

At one point you are asked if you’d like to eat ‘chicken or salmon’ and whatever option you choose, the actors hector you by saying “it’s poison on the plate”. Thankfully as a vegetarian, I refused either choice and was saved from this intimidation!

There is a food and sex scene between two guys; there is food as comfort for a couple who have lost a child; food as calories with an audience member being offered a cupcake coated with cream.

There is a trick scene where the audience is served an ‘airport type meal’ which doesn’t look like what it is – it comprises of a so-called egg cress sandwich, two profiteroles and some greens,  but the profiteroles turn out to be savoury snacks, while the sandwich is sweet.

There is a survival scene, when the lights go out in the room and a ‘waiter’ has to go out to get a last cup of coffee just to see how the audience reacts – the moral is about sharing. Then there is a sugar song, as well as an ode to the Sainsbury’s.

We are served some snacks which look like locusts made of honey, chilli and rosemary. I didn’t try them!

At the end we are given a bill which gives you a list of statistics such as ‘annual global food waste.1.3 billion tonnes,’ or ‘estimated amount of miles a strawberry travels from Spain to UK …787 miles’; food for thought, as you pause and consider that the implications of what you put in your mouth at any time.