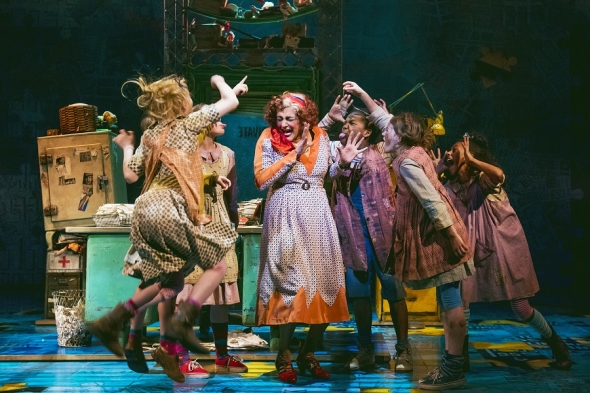 IF YOU’RE looking for a fun festive night out with all the family, you can’t go too wrong by going to see ‘Annie’.

Having Meera Syal as Miss Hannigan, the woman who looks after the New York orphanage where ‘Annie’ resides, is something of a casting coup.

She brings a new chutzpah to the role which few could fail to be charmed by – she seems to be having the time of her life, dancing, singing and pushing it out a bit (metaphorically speaking).

Annie is the story of an orphan girl abandoned to a home in New York when the economy collapsed there during the early part of the century – she befriends a very rich avuncular figure but can she escape Miss Hannigan’s unrelenting regime?

It’s a splendid production all around – even Amber, the ‘Labradoodle’, doesn’t put a paw wrong.

On at the Piccadilly Theatre in London until February 18, it’s a slick and well-executed musical – there’s great music, fine dancing and the cast was all in top form on Thursday evening. After its London run, it’s off to Toronto.

Special mention must go to ‘Annie’ herself and her young cohorts – Ruby Stokes is very endearing as the central character of the title, while her friends in the orphanage are equally impressive.

From Team Rockefeller (there are three rotating Annies for the production in all, who each have their own supporting cast of orphans), Nicole Suebebe is a standout as the smallest and Kathryn Whetter, as one of the bigger ones also adds verve and energy to all the dance numbers. They are all good but these two really shine and get the opportunity to do so.

The drama is set in New York in 1933, economic conditions are still very precarious following the terrible crash of 1929; millions remain out of work and Annie is one of the victims, abandoned by her parents who were unable to look after her.

She still holds out the hope that they will return for her – but the almost ever tipsy and rather brusque Miss Hannigan is rather more cynical.

However, Annie finds a saviour in ‘Daddy Warbucks’ (Alex Bourne). A billionaire, he decides to treat Annie for Christmas and takes her in and begins to think about adoption.

He entrusts her general welfare to ‘Grace Farrell’ (Holly Dale Spencer); the two get on splendidly.

The production zips through this first half and Miss Hannigan’s character is well established; wayward and perhaps a tad louche, she is looking for a way out and isn’t adverse to turning her feminine charms on…anyone, really. She just about keeps her kids on track but works them hard without any compassion or love.

Annie enjoys her time with Grace and Daddy Warbucks, creating something of a perfect family; of course, they have money.

The second half starts with a slightly odd scene – what looks like a committee meeting at the White House with a wheelchaired President Franklin Roosevelt (Russell Wilcox).

Its relevance doesn’t really become apparent till Daddy Warbucks enters and asks for assistance from the President in finding Annie’s parents (as you might do, if you were on friendly terms with the most powerful man on earth).

Warbucks is also offering $50,000 to any couple who can prove they are Annie’s parents.

The darker part of the drama here picks up and dubious couple Rooster (Jonny Fines) and Lily (Somerset How) hatch a plan.

It’s a Christmas tale, so you can tell what happens, more or less; the fun is really in the music and dancing and what each actor brings to their part.

Listing
Booking until February 18 – Piccadilly Theatre, 16 Denman St, Soho, London W1D 7DY
Performances:Mondays, Wednesdays, Thursdays, Fridays and Saturdays at 7.30pm, Thursdays, Saturdays and Sundays at 3pm
Prices: Tickets from £20 which include a restoration levy of £1.75. No booking or transaction fees through official sales outlets, Children Go Free (Children must be accompanied by a full paying adult and be 16 years or under at the time of the performance. One free ticket per full paying adult, valid on Band A seats only. Monday to Friday performances, excluding peak weeks and subject to availability)
Box Office:0844 871 7630
Tickets:http://www.anniewestend.com/