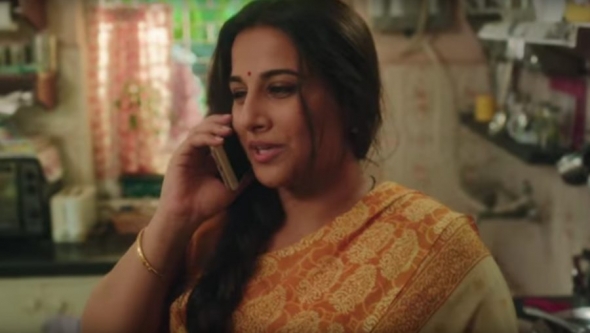 VIDYA BALAN is in fine form in this cheery social comedy.

Balan plays Sulu or Sulochana to give her her full name. She appears a happy-go lucky kind of housewife living in suburban Mumbai.

It’s a solidly middle-class household with husband Ashok (an impressive and likeable Manav Kaul) and young kid Pranav (Abhishek Sharma, and every bit as good as on-screen Mum and Dad) all rising to the everyday challenges that beset us all.

Beneath this happy family, darker currents flow. Sulu wasn’t much of a student and her upwardly mobile family are not exactly impressed with her station in life.

Her two older sisters exert an unhealthy pressure on her and her father. Censorious, and hard to please, they are a right royal pain and pop up periodically to offer her a lecture and a few verbal slaps.

Ashok is under pressure at work – a manager of an old textile firm, its best days are probably behind it and he knows it, but he can’t contemplate leaving. Pranav is forever being bullied at his posh English-language (Catholic) school – slight and diffident, he tries to improve his image by dealing in illicit items.

Director and writer Suresh Triveni’s depiction of the middle-class milieu is spot on and he gives us a sense of this family’s joys and underlying frustrations, giving his film firm underpinnings.

Into this mix, Sulu clearly has ambitions – she loves her local radio station and begins to believe she could become a radio jockey (RJ) by entering a competition.

Suffice to say Sulu’s impressions of the stars of yesteryear and her upbeat disposition and sultry voice give station controller Maria (Neha Dhupia), ideas.

Paired with the comic character of producer-poet Pankaj (Vijay Maurya) in the radio booth, Sulu soon commands the attentions of many lonely men in Mumbai.

This whole part is a hoot: funny and believable, the first hour is a very pleasant ride.

Of course Sulu’s radio ministrations at the late hour don’t impress her family and each element of discord in Ashok’s and Pranav’s lives comes to a head in a more serious and uncomfortable second half.

It’s almost like Triveni had plotted and executed everything perfectly to the first half and then thought, what now?

This is a shame because up until the interval, you’re really held by this likeable trio and can sympathise with their plight and Sulu’s entry into radio and subsequent success very is well done – there’s even a cameo, by Bollywood man of the moment, Ayushamann Khurrana as himself.

It might have been better to put some of the plot elements of the second half into the first – you might have a slightly different movie, but things would probably held up much better overall.

Nevertheless, if you like comedy and Balan and Dhupia in a masala exec role, you won’t be disappointed.